Revolutionary change is coming. As the ravenous capitalist class continues their ruthless plundering of labor value from working people, societal contradictions race toward a breaking point.

The younger generation in particular is being driven into intolerable economic insecurity. People of color, always a target of ruling class oppression, are increasingly terrorized and brutalized by law enforcement at the border and in the inner cities. Those who have struggled against gender violence, including trans violence, have endured a withering backlash from reactionaries waging legal battles against bodily autonomy in the courts. 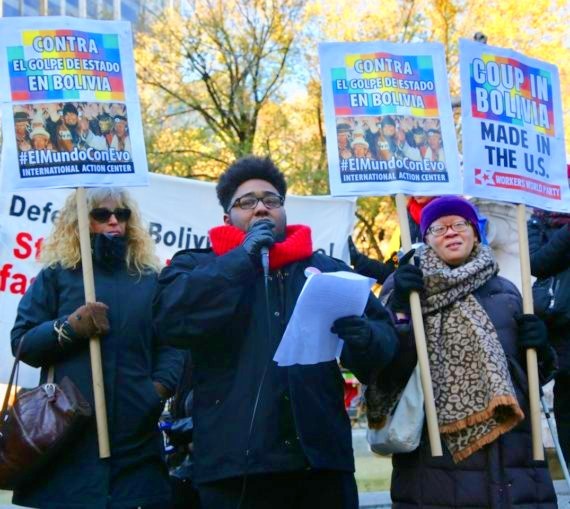 Makasi Motema speaks at a NYC rally against pro-fascist coup in Bolivia, Nov. 16, 2019.

But all oppression breeds resistance. Over the last decade, political mobilizations have surged in a way not seen in generations. The working class is determined to fight. Nothing less than the fate of the biosphere hangs in the balance of our current class struggle. The oppressed masses of this country and the world have made clear that should defeat be their fate, they will not endure it quietly. Ours is a fight for survival, and we shall not back down.

Given the pivotal nature of the current period, what is the role of a Marxist-Leninist party? Has the time finally come for a political vanguard to step forward and lead the masses into struggle against our capitalist masters? If the time is not now, then when?

For a communist party, correctly diagnosing the current political conditions and the changing character of those conditions is of the utmost importance. The political consciousness of the masses has accelerated dramatically in the past ten years, and such an acceleration calls for an equally dramatic adaptation in strategy.

From the fall of the Soviet Union in 1991, to the start of the Occupy movement in 2011, socialism in all its various incarnations was in decline. The expansion of communist parties and the political organization of the masses were stifled by a Western anticommunist consensus. The neoliberal elite gloated that we had reached “the end of history,” insinuating in Marxist terms that the class struggle had finally come to an end — with capitalists the victor.

Those communist and left-wing organizations of the period that were prudent understood the importance of survival. In such a hostile political environment, what was of utmost importance was maintaining ideological integrity and continuing a tradition of principled political agitation. To take the offensive when you are weak and your opponent is strong is to court disaster. But there is a vital corollary to that rule: If you fail to seize an opportunity once it materializes, you plant the seeds of your own destruction.

The explosion of social movements in the last decade presents a tremendous opportunity. The ruling class has shown its weaknesses and the working class is growing in strength. The time for strategic defense has come to a close. The working-class masses, and those who would seek to organize them, must take up the offense. That is the role of the vanguard party.

The belief that capitalism is irredeemable and socialism is our only solution is spreading widely.

But the means by which the capitalist ruling class should be hurled from power is hotly debated. In a period of ideological disharmony, the voice of Marxist-Leninists should ring out as clearly as a bell when it denounces and rejects right-wing opportunism.

The current farcical election process is all the evidence we need to support our analysis of the state. Bernie Sanders, the democratic-socialist (who sounds so eerily like a social-democrat), in his attempt to secure modest-  though-life-saving reforms to our health care industry, has triggered an all-out effort on the part of the Democratic National Committee to stop his nomination. The Wall Street paymasters who deliver the DNC’s marching orders have demanded that the party rally around a more pliant servant of the ruling class.

Socialism can never be achieved through a political process which is funded and controlled by the capitalist ruling class. To imagine any outcome but the resounding defeat of the working class in such a tightly controlled process is to engage in an exercise in self-delusion. The management of our society by the ruling class, which capitalists mockingly call a “democracy,” is nothing more and nothing less than a means of legitimizing the dictatorship of the wealthy. We need not help the ruling class gild their bloody crown.

Our energy is better spent elsewhere. The road to socialism lies through the masses. It is only through the organization of the masses into a political base that a socialist revolution can be won. This organizational process requires a vanguard party to set it in motion and maintain its momentum.

The development of the masses into a well-structured political body which increases in power until it is strong enough to challenge the capitalist state is the engine which has driven every successful socialist revolution. It is how Lenin defined “dual power” — two competing power structures — one controlled by the capitalists, the other driven by the masses competing for legitimacy and hegemony. This inherently unstable situation must result in revolutionary struggle and the decisive defeat of one party over the other. A failure to commit to this process is a failure to commit to our obligation as revolutionaries.

During the period of socialist contraction (1991-2011), the political consciousness of the masses could not support the development and expansion of a mass base. But conditions have changed, and we must change with them. Protest action — political agitation to intervene in the political debate — is now, and always will be, a vital part of the communist struggle. But it is not enough. The soil of the masses has grown fertile, and we are obligated to dig our roots ever deeper.

Bolivia and the Bolsheviks

The history of socialist revolutions is the history of political base building. Prior to the October Revolution, it was the Bolsheviks who used workers’ councils to drive the radicalization of the Russian proletariat in a largely peasant-populated country. In factories all over Petrograd, workers organized into political bodies to debate and determine their political and economic fate. This went beyond unionizing. Workers’ councils, even without the sanction of the bourgeois government, decided matters of life and death, war and peace. They were a government and a state unto themselves — a workers’ state that fought for the interests of their class.

This pattern held through the revolutions in China, Vietnam, Korea, Cuba and many other nations. The political bodies of the oppressed masses expanded to include peasant farmers, students and any other group exploited by capitalism. But the central principle — of the oppressed classes taking it upon themselves to build a state of and for the oppressed — remained unchanged.

Even today, as a right-wing coup d’etat washes over Bolivia, there is massive resistance from the predominantly Indigenous supporters of the Movement Toward Socialism (MAS). How is it that impoverished people can survive against the withering and brutal violence of a racist coup regime? It is a direct result of the political organization of the masses. Evo Morales and the MAS party have built a solid political base. In the Chapare region of Bolivia, every neighborhood is organized into a union that is part of a larger network building up to the regional level.

These unions plan infrastructure projects, resolve land disputes and develop political strategy. And when the coup swept through Bolivia, it was the neighborhood unions that surrounded police stations and routed the police, sending coup sympathizers into a headlong flight. The police have not returned, and union leaders say they may only return if they “get on their knees and ask for forgiveness.” (tinyurl.com/ssxk3vg)

This is the power of a highly organized mass base. But this power can only be achieved if the long-term work of deep organizing is the fundamental objective. This type of base building is difficult and time consuming, but there is no other path to socialist revolution. To turn away from building a mass base is to concede victory to the ruling class.

The project of building a mass political base in the U.S., where none currently exists, is daunting. But given the need and the rapidly accelerating class contradictions, the creation of such a mass movement is more likely than not. If Marxist-Leninists do not dive into this process, then our politics will not be represented. Our unique perspective — on the importance of anti-imperialism, the importance of connecting and supporting every struggle, the importance of international solidarity — is vital in combating the liberal strains in the left which seek to divide the working class or promote a chauvinist vision of socialism.

In their eagerness to exploit as many people as possible, the capitalists have given us an abundance of workers to unite with. Workers in shipping and transportation must be organized so that any general strike we launch will have teeth. To reach the bulk of workers, we must organize in the health care, education, retail, restaurant and manufacturing sectors. To target the largest sector of the economy, real estate development, tenants must be organized. And to reach the most oppressed, we must organize gig workers, migrant workers and sex workers.

Uniting the working class will not be easy. But when faced with a seemingly insurmountable obstacle, the revolutionary always steps forward, never backward. Our knees may buckle under the heavy burden of our struggle, but this is a burden we may not shrug off. We must press on. Revolutionary determination will give us strength and our love of the people will set our direction. The challenge of organizing for a decade of revolutionary struggle stands before us. We have no choice but to accept.

But this power can only be achieved if we commit to the long-term work of deep organizing.