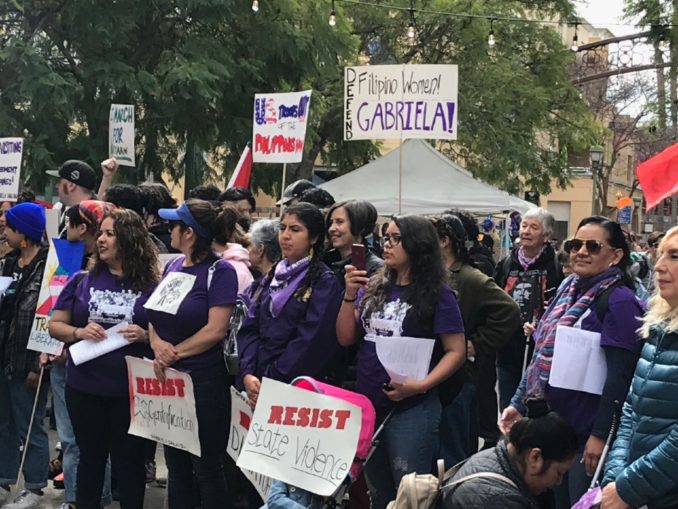 Nearly 500 people rallied at Fruitvale Plaza in East Oakland and marched through nearby neighborhoods on March 8 to commemorate International Working Women’s Day. The sponsoring coalition, led by Gabriela, a progressive Filipino women’s organization, called upon women to “take the streets and rise up to demand an end to gender-based violence against women and TGNC (transgender and gender-nonconforming) communities, to resist militarization and displacement, and to unite for self-determination. Join us as we collectively protest, singing ‘Un Violador en tu Camino’ (a song sung by women in Chile protesting government-sanctioned violence against women).”  (See IWWD 2020 Facebook page.)

Speakers included many women from local Bay Area communities fighting violence against women, including representatives from the Anti-Police Terror Project, Youth vs. the Apocalypse, Black Organizing Project, Mujeres Unidas Activas and the Palestinian Youth Movement. A group of sex workers from St. James Infirmary, including many transwomen, spoke out against the violence facing them at the U.S.-Mexican border, in their native countries to the South and in the U.S.

The day, which began with Aztec dancers, ended with Zumba organized by Latinx women and open to all who wanted to participate. The entire day was filled with moving testimony from Indigenous women from all around the world fighting U.S. militarism and oppression.

Cat Brooks, cofounder of APTP, summed up the spirit of the day when she said, “We are winning. It doesn’t feel like it. It doesn’t look like it. But I promise you the reason why white supremacy is raging  . . . the reason why everything is in chaos is because they know we are coming for them.”

— Report and photo by Judy Greenspan