March 2 — As this is written, the coronavirus (COVID-19) has become a pandemic reaching around the world, almost entirely in the Northern Hemisphere.

The U.S., with 99 reported cases and six deaths, ranks 11th on the list of countries with confirmed COVID-19 cases. The number of newly infected people reported in the U.S. is now 24 and climbing. 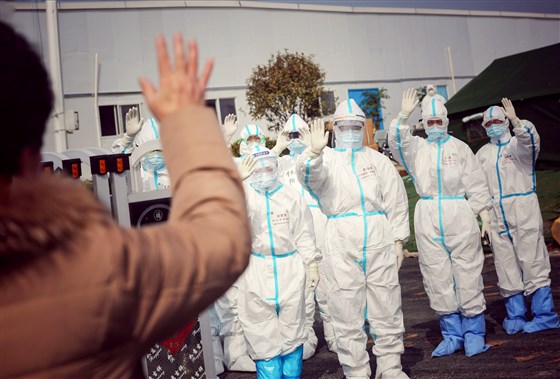 On March 1, medical staff wave to a former patient who recovered from coronavirus at the Leishenshan Hospital in Wuhan, China.

China, where the outbreak began, is still the hardest hit country with a total of over 80,000 cases and 2,912 fatalities. With four times the population of the U.S., China has taken drastic measures to slow the spread of the disease. As of March 2 the National Health Commission reported only six new cases outside Hubei, where the outbreak started.

Other countries already hit much harder than the U.S. include South Korea and Iran.

So far, the death rate of this new disease comes to about one in every 40 people infected.

Why the U.S. nonresponse to the epidemic?

Given the speed with which these statistics have been compiled by the relevant health authorities, is there any reason why the U.S. government should not be in high gear preparing to deal with the spread of  COVIN-19 here?

But just the opposite is happening. Anyone with an ounce of common sense must have been appalled when President Donald Trump, at a rally in South Carolina on Feb. 28, called the coronavirus a “new hoax” by Democrats to defame him. This made it clear that if people in government agencies are feeling pressure to release resources to fight the virus, they will have to challenge the White House.

Trump’s “know nothing” attitude toward the virus isn’t just stupidity. It’s an attempt to sidestep the consequences of not preparing for an outbreak in the U.S. that medical scientists have been predicting for months and that has already begun.

Triggered by the news of COVIN-19 deaths here, U.S. stock markets took a dive on March 28. The Dow Jones dropped by 938 points — its biggest one-day decline since 2009.

This certainly got the attention of Washington. But at this point, the Trump administration is much more focused on shoring up the stock market than on protecting the population from COVIN-19. Government intervention is expected to translate into the Federal Reserve lowering interest rates to stimulate “growth.”

How will that help people without health insurance who get sick? Who will pay their bills? Or instead will they be stuck with huge debts?

A majority of U.S. workers are struggling with multiple financial stresses and don’t have enough cash to cover a $500 emergency.

Some health authorities are telling workers to stay home if they feel sick, but nearly half get no paid sick leave. No provisions have been made to compensate sick workers who stay home in order to avoid spreading the disease. This includes health care workers, who are much more likely to be sickened by the virus.

Workers who have jobs where they can telecommute or perform home care won’t be penalized. But a huge percentage of workers can’t do their jobs at home, including fast food and hotel workers or cabbies and truck drivers, all of whom are notoriously underpaid.

What China did about it

All this contrasts sharply with China’s reaction to the spread of COVID-19 there. Measures were quickly taken to compensate for the lack of income caused by the quarantine of whole geographical areas. Debt payments were suspended by government decree.

Would Washington ever take such a step? The bankers and other creditors would scream bloody murder.

The Chinese government also built 16 brand-new hospitals to treat patients. No one is turned away for lack of insurance or money to pay the bills.

While China has in recent decades allowed some capitalist ownership, its basic infrastructure is state-owned, and policy is set by the 90-million member Communist Party. Its national health care system covered 90 percent of the population in 2019.

After decades of foreign domination that drained its wealth and stifled growth, China’s recent rapid economic and social development is due entirely to its great revolution that culminated in 1949. Workers and peasants who had fought the landlords and capitalist bosses eventually were able to take the power and embark on the enormous task of lifting hundreds of millions out of extreme poverty while laying the basis for socialist development.

As young people in the U.S. yearn for an end to capitalist exploitation and war, they are looking ever more closely at how to achieve socialism here. The spread of COVID-19 will only deepen the need to make revolutionary social change.