Feb. 22 — Fifty-five years after his assassination on Feb. 21, 1965, Malcolm X continues to be an inspiration today for activists, young and old. This was expressed at a Black History Month forum held here tonight where people gathered to discuss, report on and learn about his life. 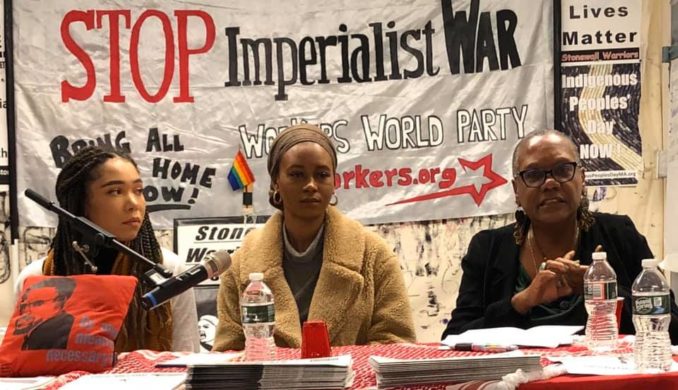 Sponsored by the Boston branch of Workers World Party, the meeting entitled “Malcolm X: What does his legacy mean for today’s global struggle” featured Monica Moorehead, a managing editor of Workers World newspaper and editor of the book, “Marxism, Reparations and the Black Freedom Struggle.”

After showing a video clip of Malcolm’s speech “By Any Means Necessary,” Moorehead told the audience, “If Malcolm X only championed the rights of Black people inside the U.S. with his nationalist positions, that would be enough right there to respect and applaud him as a working-class hero. But Malcolm was much more. He was a Pan Africanist, revolutionary nationalist, developing an anti-imperialist, anticapitalist perspective. He wanted to take the plight of African peoples globally with a declaration of demands from OAAU [Organization of Afro-American Unity] to the United Nations, when it provided more a forum for oppressed peoples then than it does now, due to the influence of national liberation struggles. And that perspective lives on today with the struggle of migrants not just from Latin and South America but from Africa, the Caribbean, Asia and the Middle East, who have been driven from their homeland because of the superexploitation of their labor and resources by the profit-hungry multinationals and banks.”

Part of the students’ joint statement read, “Malcolm X/el-Hajj Malik el-Shabazz has long been an inspiration to us; someone who we have looked to for empowerment, wisdom and his understanding of unity every day. One of the many reasons we continue to fight against these larger institutions that don’t believe we belong. We view solidarity with all the oppressed people of the world as all of us continuing Malcolm’s dedication to that work in spirit. We understand the needs for not only building solidarity and community, but educating those around us about the exploitative and violent history of the United States: the imperial core/empire.

“Malcolm gives a great quote about academia and our institutions’ failure to address our realities. Our higher education systems are built on the backs of our ancestors and the ideals of white supremacy, continuing the oppressive cycle through ideas of elitism, ‘professionalism’ and the talented tenth. In the words of Malcolm X: ‘And just because you have colleges and universities, doesn’t mean you have education.’”

A special tribute was paid to Traynham, who recently turned 83 years old. He has been a leader of United Steelworkers Local 8751, Boston School Bus Drivers Union, for over 40 years. His militant life history traces the Black Freedom Struggle from the 1960s through the present day.