Over 50 members of local anti-war and anti-imperialist groups attended a panel discussion here on Feb. 23. The meeting was organized by the Portland Anti-War Coalition, a newly formed group, which is planning a March 14 rally as part of the International Days of Action to Stop U.S. Sanctions and Economic War. 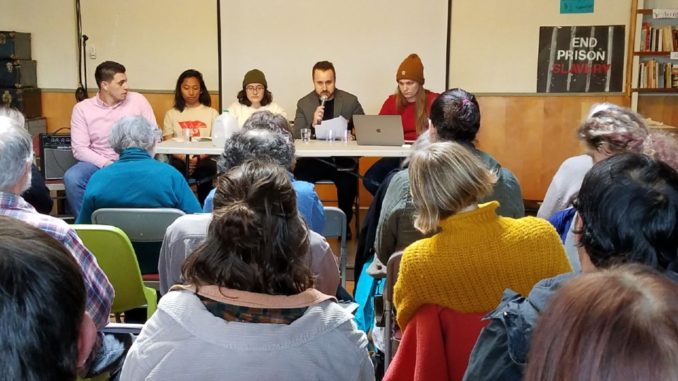 Keynote speakers were Palestinian Saif Al Khatib; Emma Martinez, a member of the International Migrants Alliance; Jennifer Anderson, from Anakbayan; and Workers World member Joshua Hanks representing the Sanctions Kill coalition. They all announced their common goal of coalition building — with an emphasis on raising class consciousness in the U.S. about imperialist wars — and the need for an anti-war, anti-sanctions movement.

Hanks spoke about the specific, targeted acts of war committed by the U.S. in the form of sanctions: “Sanctions are not separate from war but rather play an integral role in modern warfare, extending the theater of combat to economics and diplomacy. Ending sanctions should be a major demand of any anti-war and anti-imperialist movement.”

Other speakers expressed similar sentiments. Martinez described the U.S. war machine as being the root cause of forced migration to the U.S. Al Khatib emphasized that any group or movement should be judged by its stance on Israel’s oppression of the Palestinian people.

Anderson explained the U.S. influence over the government of the Philippines. She stressed the importance of building a united anti-imperialist movement tied to workers worldwide.

This meeting was a strong first step in building the anti-war, anti-sanctions
movement in Portland. Everyone who attended was committed to building the March 14 demonstration.