Over 300 activists and organizers from across the U.S. and Canada met here on Feb. 21-23 for the United National Antiwar Coalition national conference, “Rise Against Militarism, Racism and the Climate Crisis – Building Power Together.”

The opening plenum focused on the role of the U.S. anti-war movement in demanding an end to U.S. interventions across the world. Remarks by UNAC Co-Coordinator Joe Lombardo were followed with talks by Bahman Azad, organizational secretary of the U.S. Peace Council; Bernadette Ellorin, chairperson of BAYAN USA; and Camilo Mejia, a Nicaraguan who left the U.S. Army in 2003 during the Iraq War as a conscientious objector and became an anti-war activist. The evening ended with a cultural event featuring songwriter and performance artist Aya Aziz.

Saturday’s first session focused on connecting the wars at home and abroad to the global climate crisis, with panelists Cassia Laham of POWIR (People’s Opposition to War, Imperialism, and Racism); Diane Moxley of Green Party New Jersey; Jean-Luc Pierite of Tunica-Biloxi Tribe of Louisiana, president of the Board of the North American Indian Center of Boston; and Makasi Motema of Peoples Power Assemblies-NYC. 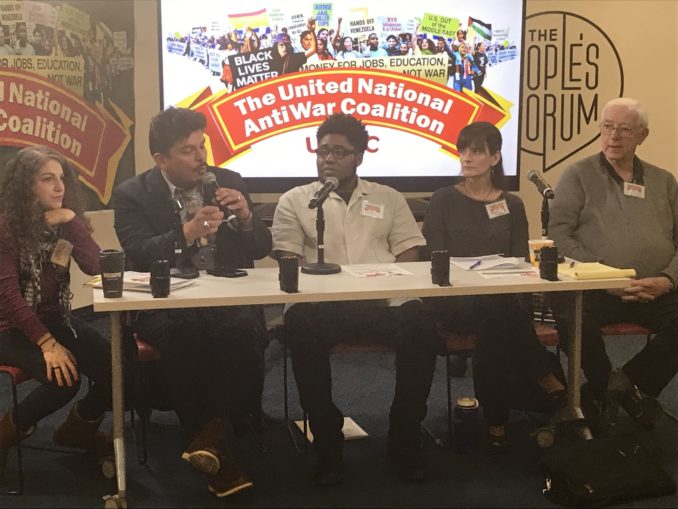 Setting the stage for continued organizing against U.S. sanctions, a major panel was convened with Sara Flounders, co-director of the International Action Center; attorney Roger Wareham of the December 12th Movement; Juyeon Rhee of Nodutdol for Korean Community Development; Medea Benjamin, co-founder of CODEPINK; and Suzanne Adely of the International Association of Democratic Lawyers and co-chair of National Lawyers Guild International.

A spirited Students for a Democratic Society delegation from Wisconsin, led by Lana Akindes, raised the important demonstrations against the Democratic National Convention to be held in Milwaukee in July. Support was voiced for plans for protests in Charlotte, N.C., during the Republican National Convention in August (raised by this writer).

Glen Ford, executive director of Black Agenda Report, gave a keynote talk focused on the duplicity of the two-party system of corporate domination.

Saturday’s final panel focused on the federal government’s repression of movements against racism, capitalism and war. Frank Chapman of the National Alliance against Political and Racist Repression; attorney Michael Steven Smith, author of “Lawyers for the Left”; and Margaret Flowers and Kevin Zeese of the Venezuelan Embassy Defenders led this important discussion.

On Sunday morning,the gathering focused on the anti-war movement’s approach to the 2020 elections, including the fact that none of the major presidential candidates of the two major parties have called for a significant reduction in the Pentagon budget or for an end to the ruthless sanctions and endless war waged by the U.S. empire. The panel included Ajamu Baraka and Margaret Kimberley, respectively national organizer and coordinating committee member of Black Alliance for Peace, as well as Adrian Bonifacio, chairperson of Anakbayan-USA.

Workshops during the weekend discussed nuclear weapons; the U.S. military as the world’s biggest polluter; fighting U.S. regime change in Iran, Nicaragua, Ukraine and beyond; the importance of the human rights framework in opposing U.S. war; imperialism and the migration crisis; U.S. war plans for China and Russia; how to analyze U.S. imperialist propaganda; and fighting militarism in our communities.

The conference supported a series of follow-up actions to build unity in the struggle. There was overwhelming support for coordinated actions against U.S.-imposed economic sanctions on March 13-15; the National Cuba Conference in New York City on March 21-22; protests at the DNC and RNC conventions; the defense campaigns of Chelsea Manning, Julian Assange and the Embassy Protectors; May Day actions; Earth Day and other climate actions; and anti-fascist actions in Europe on May 9. Also stressed as a focus in moving forward was defense of mobilizations by im/migrants, anti-racists and communities of color, as well as emergency actions against U.S. war moves on countries around the world.

The conference ended with a march to the Port Authority of New York to protest Greyhound’s compliance with Immigration and Customs Enforcement and U.S. Customs and Border Protection in their illegal search, detention and deportation of people on Greyhound buses.

As a result of a militant and ongoing campaign against Greyhound, the company announced Feb. 22 it would no longer comply with these racist searches. But due to the recent presidential directives sending ICE into Sanctuary Cities, the conference stressed the need for continued vigilance and mobilization.