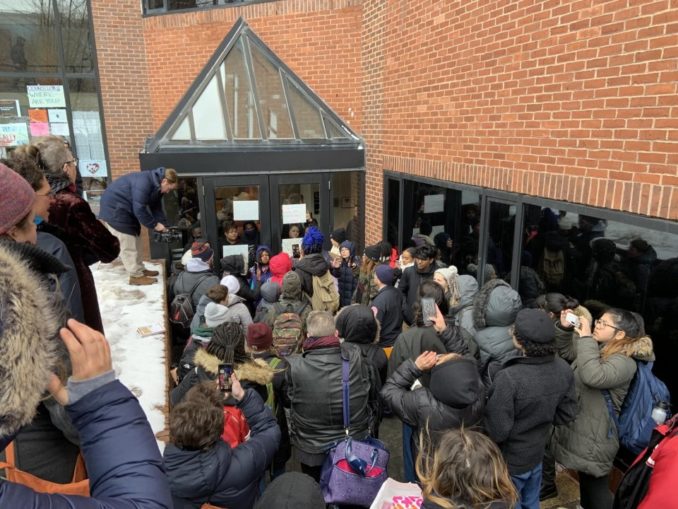 At least 29 such physical assaults, verbal threats — including death threats — and graffiti on and near campus have occurred since Nov. 7, the latest on Feb. 21. (See timeline at tinyurl.com/s5es5w6/.)

#NotAgainSU launched protests in November, when multiple instances of racist graffiti and violent vandalism first appeared in dormitories and classroom buildings. After the lack of any response from the administration, the coalition occupied the Barnes Center at The Arch for eight days. Finally, a crowd of 1,000 people marched on Syverud’s house, demanding his resignation.

After a standoff, the chancellor agreed to meet coalition demands that his administration act to end the attacks and make systemic changes to fight discrimination. But racist incidents have continued unabated, while administration actions have been so slow as to be only “window-dressing.”

Students occupy to get action

The spring semester began with a homophobic physical assault and more racist graffiti. After an unproductive appeal to the SU Board of Trustees, #NotAgainSU occupied Crouse-Hinds Hall, the admissions building, on Feb. 17.

The coalition’s renewed list of demands includes punishment, up to expulsion, for those promoting or initiating hate crimes; mandatory diversity training for incoming faculty and administrators; curriculum reform on diversity; changed housing procedures to minimize impact of prejudice; more hiring of staff of “marginalized identities,” including resident advisors and counselors; and the designation and funding of a separate Multicultural Center.” (Detailed demands at tinyurl.com/tgv3aw)

On Feb. 18, Syverud and his administration immediately took an aggressively hard line against the protest and issued suspensions of 30 student occupiers. Armed university guards turned back food, medical supplies and any supporters who came to offer assistance to the students.

The racist bias of the administration was quickly unmasked when four suspended students came forward to prove they had never been present in the Crouse-Hinds occupation. All four women were Black students.

On Feb. 19, #NotAgainSU issued a statement: “The administration has not appropriately addressed the 25+ hate crimes that have occurred … and they have not addressed student protesters in any way that is reflective of a commitment to equal safety and support.”

Immediately after the SU administration imposed the suspensions, 100 graduate students of color and international students announced a labor strike in solidarity with the occupiers. (tinyurl.com/wan3uwc)

They were quickly joined by other grad student workers also calling for a strike action and pledging to withhold their labor from the university. Over 150 had signed the separate solidarity strike statement by the evening of Feb. 19. (tinyurl.com/qpnohk7)

In addition to supporting the demands of the occupiers, the statement declared the strike would continue until suspensions of all #NotAgainSU organizers and student activists were lifted and their records cleared.

With the power of student-worker solidarity accelerating, an immediate victory was won. Chancellor Syverud was forced to lift all suspensions on the occupiers by the afternoon of Feb. 19. He did not, however, address any of the student demands.

A group of SU professors issued a statement denouncing the administration’s lockdown and isolation of protesting students; denial of food, medical supplies and visitors; imposition of suspensions; use of armed guards and threats of arrest. The statement said in closing: “The use of war crime tactics against our students must be renounced.” (Daily Orange, Feb. 24)

Student workers on strike had these words of fighting wisdom to offer: “A number of BIPOC [Black, Indigenous and People of Color] and international graduate students have received threats of retaliation from their respective departments — including threats of termination and revocation of funding. To you all, we say the only protection for us lies in our collective numbers. … Our strike has already seen a win with the suspensions being lifted. This speaks to our collective power. But wins are never a time to concede; wins are always times to sustain pressure.” (“Labor Strike” statement, tinyurl.com/wan3uwc)