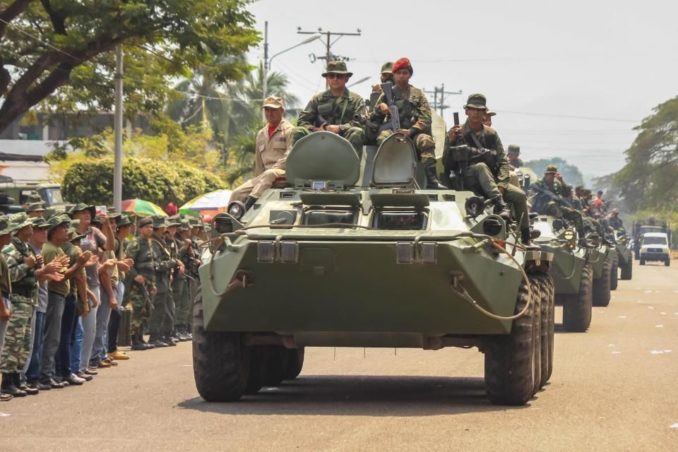 Published in pagina12.com.ar on Feb 18. Translation by John Catalinotto.

President Nicolás Maduro announced Feb. 14 that this exercise, called “Bolivarian Shield 2020,” activated 2.3 million combatants. The last operation of a similar type took place in September 2019.  Under the name “Sovereignty and Peace,” it focused on the border areas.

The televised exercises showed what a military deployment might look like in the event of an attack.  They demonstrated how the deployment of soldiers, the anti-aircraft system and the firing of missiles from warships would look.  And they showed how an operation to establish resistance centers in Caracas, in the event of a bombing and troop attack, would appear.

Activation of the Militia was one of the significant elements within the Bolivarian Shield. General in Chief Vladimir Padrino López highlighted its importance: “The incorporation of the Militia as a special component of the FANB grants an added value to the defense of the Nation […] they are regular combatants, not armed civilians.”

The Bolivarian Militia has been the target of many attacks by the Venezuelan opposition, which has oscillated between ridiculing those who are part of the Militia — and on the other hand — showing its fear about the growing number of women and men in the Militia and the extent of their training.

This is one of the most distinctive features of the Venezuelan political process, as it allows and encourages the participation of the population in the defense of the nation under Article 130 of the Constitution. The Militia consists mostly of women and men, workers, from the popular sectors, slums, and rural areas — those who identify with Chavism [the revolutionary process begun by the late President Hugo Chávez] and realize the need to prepare themselves for upcoming threats.

These threats come at a decisive moment in Venezuela, following the U.S. government’s organized tour for [self-proclaimed “president’] Juan Guaidó.  He made key appearances at the State of the Union address in the U.S. Congress and at a meeting with President Donald Trump in the White House. These were not just photo opportunities.

A sector of the Venezuelan right-wing is openly calling for the use of force against the Venezuelan government. That wing of the opposition is lobbying in the U.S. in order to bring about aggressive action. They are active where a sector of the Republican Party and the deep state [Pentagon, CIA, etc.] act along those lines.

Within this framework, Bolivarian Shield 2020 was a demonstration of force, military readiness and dissuasion aimed at the United States and Venezuela’s neighboring countries, particularly Colombia and Brazil.  There have been instances of serious tension coming from across the border of these two countries aimed at  Bolivarian Venezuela.

This is not the only defensive action which the Maduro government has developed.  Other operations are used to prepare for potential conflicts where regular military action would be the least likely. The framework of possible attacks suggests that potential operations are focused on aggression by paramilitaries, mercenaries – with attempted surgical shootings, such as assassinations or extractions – or attacks aimed at provoking social upheavals.

The military exercise was also a reaffirmation of the existing command of President Nicolás Maduro, and the fictional presidency of Juan Guaidó, who has given no concrete or decisive announcements since his return to Venezuela.