The author, a former leader of the Green Party of Wales, writes on political and social issues. This article, on the Israeli blockade of Gaza, has been published as a resource on the sanctionskill.org site. The Sanctions Kill coalition has called for actions on March 13-15 to denounce U.S. -imposed sanctions as acts of war and crimes against humanity. Workers World republishes the article in solidarity with the March 13-15 protests and with the people of Gaza.

Feb. 9 — The hardships in Gaza are well known, but the human implications of the blockade are rarely documented in the Western press. This is because the interests of Israel, the U.S. and other nations supporting these sanctions would not be well served by the truth.

Let us be clear, these are Israel’s sanctions imposed as an occupying power, but this form of collective punishment upon an already impoverished civilian population is heavily backed by the U.S. through unstinting political support and billions of dollars in economic and military aid sent annually from the U.S. to the Israeli government.

Gaza is a distinct area of isolated land bordering the Mediterranean Sea to the west, Egypt to the south, and Israel to the east and north. It is roughly the size of Detroit. Most entry points are permanently closed, and it is almost impossible for residents to leave. Lord Patten, former chair of the British Conservative Party, said Gaza was “an open-air prison encircled by an apartheid wall.”

But it is worse than that. I have been there. Gaza City, with 4,000 years of torrid history behind it, is home to about half a million people. In the saturation bombing of Gaza city by Israel in 2008/9, more than half the city was utterly destroyed. An estimated 1,400 Palestinians and 13 Israelis died in the conflict. The net result is dire overcrowding in the buildings left standing. Rebuilding is impossible as building materials are banned.

The sanctions imposed on the people living on this small strip of land are cruel and inhumane, as are all sanctions designed to bring an entire people to its knees for the sake of political disruption. Among the many hundreds of items banned from Gaza are coriander, sewing thread, spare parts for tractors, fishing rods, steel and concrete, some medicines as well as paper, pens and chocolate.

I brought a couple of bars of chocolate with me when I eventually made it through the Rafah Gate, and one of the most moving sights I have seen in my life was that of a woman slowly unwrapping the chocolate and holding it to her mouth. She didn’t eat it, she just smelt it, and savored the thought of it, and put it in quietly in her bag. She had not tasted chocolate for more than 20 years.

Sanctions cause hygiene and food problems

Due to the banning of building materials, Gaza has never been able to rebuild its sewerage plant, which was bombed to smithereens in 2009. I experienced the raw sewerage of some 2 million people gushing untreated into the Mediterranean Sea. 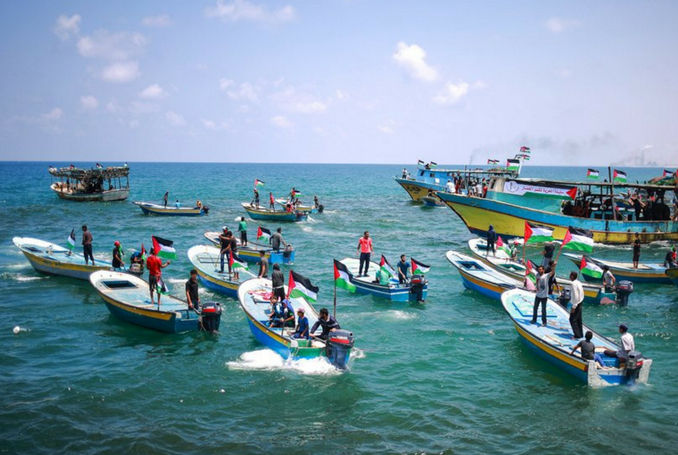 This is not just a hygiene problem; it is a food supply problem as well. Gaza fishermen in their little boats are constantly being harassed and shot at by Israeli warships. Forced back from their legal fishing zone of 20 nautical miles (Oslo Accords) to just a few hundred yards from shore means they have to fish in virtually undiluted sewerage. Fresh fish is one of the few sources of protein for Gazans as meat, lentils, seeds and nuts are banned.

The World Bank estimated in 2015 that [Gaza’s gross domestic product] losses caused by the blockade since 2007 were above 50 percent and entailed large welfare losses. Gaza’s manufacturing sector, once significant, shrunk by as much as 60 percent in real terms due to the wars in the past 20 years and the blockade.

Gaza’s exports have virtually disappeared since the imposition of the 2007 blockade. The World Bank stated that “solutions have to be found to enable faster inflow of construction materials into Gaza,” while taking into account “legitimate security concerns of neighboring countries.”

Three out of four people in Gaza are refugees. Unsafe drinking water has led to a worsening health crisis. Gazan children suffer from diarrhea, kidney disease, stunted growth and impaired IQ. Twenty years ago, 85 percent of Gaza’s drinking wells were too contaminated for human consumption. Today, that figure is 97 percent.

The underground aquifer was never going to be enough to supply the quadrupling of the population when refugees flooded into Gaza in 1948 in fear for their lives. The water now is basically poison.

Food, fuel and water are meted out by the Israeli government as they see fit. An Israeli official has stated that the objective of these sanctions is to “put the Palestinians on a diet, but not to make them die of hunger.”

When I was there, the fuel had run out, and there was certainly not enough food for visitors. I was given a small bottle of water. I had the feeling that this generosity would lead to someone else going without.

Power off 20 hours a day

The power is shut off for 20 hours a day, sometimes more. With daily armed drone patrols overhead, gunboat patrols in the sea and a fortified land border where indiscriminate shootings of children, donkeys and old people are a weekly occurrence, daily life in Gaza is an unimaginable torment. The Palestinian Centre for Human Rights keep an account of the weekly death toll. These are rarely reported in the world press as they conflict with Western propaganda efforts.

Sanctions affect the health of all, but children suffer most. Undernourished, traumatized by constant bombings and with death and destruction a daily event, they will grow up in deformity, despair and hopelessness. They will also know who the perpetrators of their misery are.

There is broad consensus among human rights organizations like Amnesty International, Human Rights Watch, the International Committee of the Red Cross, as well as U.N. offices such as the U.N. Office for the Coordination of Humanitarian Affairs (UNOCHA) and United Nations Relief and Works Agency (UNRWA), that the siege of Gaza is illegal and exists in flagrant disregard for the democratically elected government of Gaza.

The most important thing to recognize about sanctions is that they don’t work. Worse, they are counterproductive in that they manufacture the conditions for hate and revenge. This is a psychological cost which no side can afford if normalized relations are the ultimate goal.