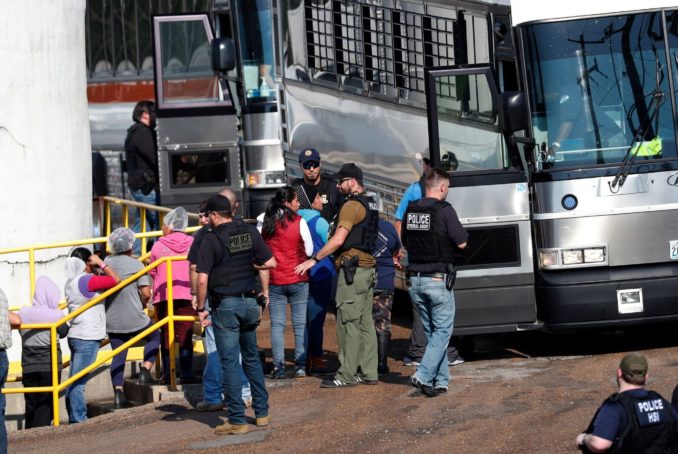 No matter what else is happening, the Trump administration is not relinquishing its war on migrants.

Savoring the victory of an impeachment that failed to oust him from office, the 45th president is set to deploy an elite squad of Customs and Border Protection agents in major cities throughout the country. The decision to deploy the Border Patrol Tactical Unit (BORTAC) is another sign that Trump is actually at war with migrants.

On Feb. 14 (Happy Valentine’s Day, migrants), the New York Times reported that the Trump administration’s announcement of this deployment is “part of a supercharged arrest operation” that will target sanctuary cities in particular.

Trump, salivating to frighten and bully everyone in opposition to him, is escalating his fight against local governments, many of them led by Democratic Party officials, who have refused to allow their police or city agents to work with Immigration and Customs Enforcement.

The “specially trained” officers will be sent to Chicago, New York, Newark, Atlanta, San Francisco, Los Angeles, Boston, New Orleans, Houston and Detroit beginning this month and through May. Their deployment, however, could be extended.

These cities have huge numbers of people of color. ICE agents, who act exactly like SWAT teams, are a threat to all of them.

A case in point is the shooting of a young man, Eric Diaz Cruz, in the face in Brooklyn, N.Y. On Feb. 7, ICE agents broke into the home to arrest Gasper Avendano-Hernández, who they thought was in the U.S. without documents. When Cruz tried to help Hernandez, guns went off and Cruz, 26 years old, was shot in the face.

The Mexican Consul later confirmed that Avendano-Hernandez was actually in the country with documents!

On the same day as the shooting, in a show of solidarity, community leaders held a press conference at the hospital where Cruz was taken. The Brooklyn Borough president and others demanded accountability from ICE and said that the shooting “should never have happened in a sanctuary city like New York.”

The next step would be for city officials to get on board to abolish ICE altogether.

To punish New York, Trump arranged for an announcement on Tucker Carlson’s show on Fox News about a new Department of Homeland Security directive saying city residents are no longer eligible to enroll in programs like Global Entry, which expedites travelers’ wait times when returning to the U.S. from abroad. (Feb. 5)

The reality is that, while sanctuary cities are important to send a message to Washington, migrant workers are still subjected to roundups and checkpoints in those cities. Nonetheless, it is a minor victory for migrant workers when police are not forced to work with ICE.

Trump is relentless in cracking down on sanctuary cities. He is skirting local laws in order to assign 100 BORTAC agents to work with ICE.

Who are these agents? According to the Feb. 14 New York Times, the elite tactical team known as BORTAC is the SWAT team of the Border Patrol. They will be provided with “stun grenades, enhanced Special Forces type training, including sniper certification.”

Even within the ranks of this reactionary government body, former CBP commissioner Gil Kerlikowske told the Times that “sending the officers to conduct immigration enforcement within cities, where they are not trained to work, could escalate situations. He called the move a ‘significant mistake.’ ”

In a Feb.15 “PBS News Hour” interview, Times reporter Caitlin Dickerson explained that BORTAC officers “are chosen from individual border patrol units. They undergo specific training. It’s similar to Army Rangers or to Special Forces. They’re sniper certified, they have grenades … that can obscure what you can see when they break into your home. They carry very large weapons. They’re very much a militaristic squad from within the Border Patrol.

Dickerson continued: “Undocumented immigrants are on high alert at this point. They know exactly what ICE agents wear. And they’re going to notice when they see people wearing not a typical ICE uniform, but a SWAT type uniform outside their home, if that’s the way that the BORTAC officers are dressed when they go out on this operation.

Nothing that Trump or Obama before him have done has stopped the flow of humanity into the U.S. or other developed countries.

This is not merely of crisis of policy. This is a crisis of imperialism. It is capitalism’s economic, social and war-driven policies that are at the root of forced migration.

A prime example is El Salvador.

Human Rights Watch, which is a mixed bag in terms of its political outlook, reports that at least 138 people who had been deported back to El Salvador in the last few years have been killed upon return. Others have been “sexually assaulted, tortured or kidnapped.” (Portside, Feb. 8)

Yet people still continue to come here. Despite the SWAT teams, the cages, the separation of families, the deaths of children from the flu, the anti-trans murders and so on, workers continue to make that dangerous trek into the U.S.

And those who survive and establish roots hook into a complex and thriving underground system that alerts the community whenever ICE dogs appear. This is a network operating under the very noses of imperialism.

This kind of organization, tenacity and resistance is what will ultimately defeat the war on migrants. The struggle cannot be successfully won, however, without the unity and solidarity of all workers in this country who demand “Abolish ICE. Dismantle BORTAC. No borders in the workers’ struggle.”