The following slightly edited article appeared on the front page of Workers World on Feb. 25, 1965. It was written by the editorial staff.

The bullet that stilled the voice of Brother Malcolm X came from the arsenal of imperialist white supremacy. No matter the hand that pulled the trigger, the missile was guided by the same sinister forces who assassinated Patrice Lumumba and his heroic lieutenants in the Congo.

The ruling class that boasts of the greatest array of violence in the history of humankind, the class that has not hesitated to use that violence on the disarmed and the helpless throughout the earth, has struck again and at one of its most important targets.

Like Lumumba, he had to be removed. The imperialists will let nothing stand in the way in their drive to rule whatever portion of the earth they can.  And the time they could do this peacefully or “democratically” – if it ever did exist — is now long past.

It cannot dispose of the ideas of the most militant leaders of the oppressed, so it must try to eliminate their persons.

Innate violence of the ruling class

The depraved, sadistic stooges of the ruling class have been murdering the lesser-known, unsung heroes of the oppressed for centuries. But now the U.S. racist masters have gone in for murdering the leaders.

The ruling class has even launched upon a program of government by assassination because its own ranks are torn by the upward thrust of the oppressed peoples.

In both cases, the racist, militarist rulers of the United States have the same aim – to divide and rule the masses and to set the country more firmly on the road to war.

The Kennedy assassination revealed the extreme instability of the ruling class and its tendency to resort to the most violent solutions in its internal faction fights.  Even before this, the mysterious death of Dag Hammarskjöld in a plane accident while he was apparently pursuing a too “mild” line in the Congo, raised strong suspicions in Europe and Africa that the CIA had really arranged his demise. But the assassination of Malcolm reveals, like the phony “Statue of Liberty bomb plot”  [1964] that far more is now afoot within the country than just a faction fight of the big bosses.

The intrigues, frame-ups, wiretaps and conspiracies against the oppressed that have become so commonplace have given way to bursts of police violence, clubbings, shootings – and assassinations.

We live under such a system and are ruled by such brigands that it is inevitable that, frustrated by failure with other methods, they unleash the kind of violence Malcolm often exposed before he fell victim to it.

The papers, as usual, turn everything upside down. Malcolm was fond of saying that they invariably make the criminal look like the victim and the victim appear to be the criminal. So it is with Malcolm’s own death.

Every single editorial writer for the imperialist racists has managed to say in one way or another that Malcolm “died as he had lived – by violence” or that “he lived by the sword and he died by the sword,” etc.  It might almost be thought that it was Malcolm who had assassinated someone rather than the other way around. So persuasively do these highly paid agents of the racist ruling class write their obituaries.

The hypocrisy and the lies are hard to expose. Malcolm’s murder is being covered up by the very same forces that murdered him – the racist rulers and their penmen, policemen and politicians.  But murder will out. The real murderers will be brought to justice.

And Malcolm’s struggle for the line of militant self-defense of the Black People against the violence of imperialism will be vindicated, not least of all, by his own martyrdom. 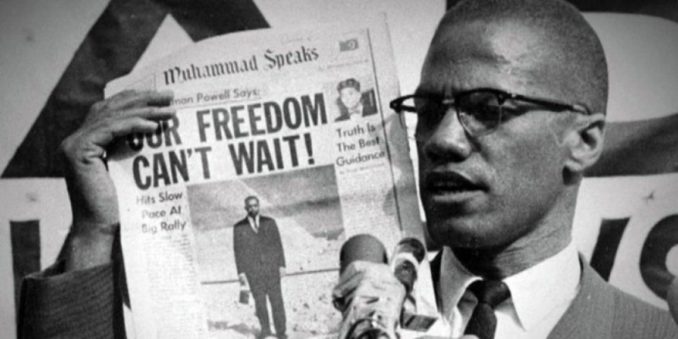