The Wet’suwet’en First Nation faces colonial violence and invasion, as it continues to defend its territory against a multibillion-dollar pipeline project threatening its traditional lands and waters. Wet’suwet’en territorial borders are surrounded by the western province that was named British Columbia by the colonizing nation Canada. 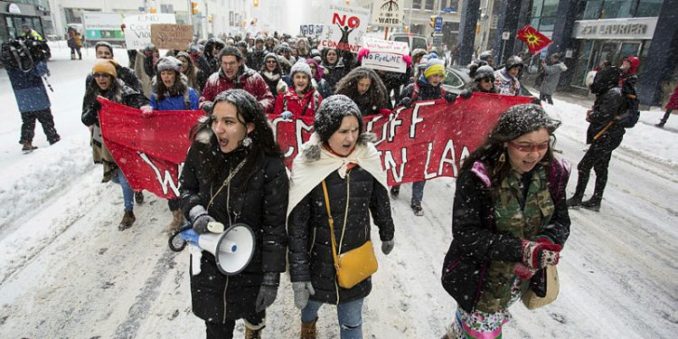 On Jan. 8, the Unist’ot’en Camp protecting Wet’suwet’en territory called for a week of international solidarity: “On Dec. 31, 2019, B.C. Supreme Court Justice Marguerite Church granted an injunction against members of the Wet’suwet’en nation, who have been stewarding and protecting our traditional territories from the destruction of multiple pipelines, including Coastal GasLink’s (CGL) liquified natural gas (LNG) pipeline. Hereditary Chiefs of all five Wet’suwet’en clans have rejected Church’s decision, which criminalizes Anuk ‘nu’at’en (Wet’suwet’en law), and have issued and enforced an eviction of CGL’s workers from the territory.” (tinyurl.com/sldyrz2)

Church’s injunction is illegal. The Wet’suwet’en hold legal rights to their lands: In 1997, the Supreme Court of Canada recognized Aboriginal title of unceded First Nations lands in the Delgamuukw decision.

But rather than opening relations with the First Nations, whose land has never been ceded, the provincial government of British Columbia and corporate lobbyists are conspiring to force “surrender” of First Nations land rights in order to steal land to construct the $5 billion (6.6 billion Canadian dollars) CGL pipeline. (tinyurl.com/s3b3w4t)

The force used includes the Royal Canadian Mounted Police’s violent raid of sovereign lands in January 2019, which sparked protests across Canada and worldwide.

The Jan. 8 solidarity call stated: “Our strength to act today comes from the knowledge that our allies across Canada and around the world will again rise up with us, as they did for Oka, Gustafsen Lake, and Elsipogtog, shutting down rail lines, ports and industrial infrastructure and pressuring elected government officials to abide by UNDRIP (the U.N. Declaration on the Rights of Indigenous Peoples). The state needs to stop violently supporting those members of the 1% who are stealing our resources and condemning our children to a world rendered uninhabitable by climate change.”

On Feb. 5, the Tyendinaga Mohawks blockaded the railroad near Belleville, Ont., at the only eastern link of the Canadian National Railway Co. (CN) between Eastern Canada and Western Canada or the U.S. Midwest. This effectively shut down freight and passenger rail traffic across eastern Ontario. (Progressive Railroading, Feb. 12)

Tyendinaga Mohawks say they will not end their demonstration until the RCMP leave Wet’suwet’en territory.

By Feb. 11, expanding rail protests effectively shut down all routes between Toronto, Ottawa, Montreal and Kingston, and CN warned of a spillover effect on coastal ports. (tinyurl.com/v3aws6w) CN stated dozens of cancelled freight trains had stalled shipment of every category from propane to feedstock for factories. (tinyurl.com/t58tn4c) And CN’s limited railyard space for rolling stock storage added to the shutdown through traffic backup from Halifax, N.S., to Windsor, Ont., and in parts of B.C.

The shutdown also impacts wheat and barley farmers. “Delays will result in farmers being unable to deliver their grain,” Dave Bishop, chair of the Alberta Barley Commission, said. “We are still recovering from the harvest from hell and need reliable grain movement in order to get back on track.” (NPR, Feb. 14)

As of Feb. 12, Via Rail Canada said 157 trains had been cancelled, affecting over 24,500 passengers on the Toronto to Montreal rail corridor. Via Rail service in B.C. province was also shut down by a blockade near New Hazelton, disrupting service on the freight’s northern B.C. mainline. The RCMP arrested 28 people at a Houston, B.C., rail blockage.

Protests of the ‘history of violence’

On Feb. 15, 100 protesters physically blockaded a rail line in East Vancouver and handed out flyers that stated: “We want to recognize the shared history of violence experienced by Indigenous people and Punjabi and Chinese communities in so-called B.C.” (tinyurl.com/uyr8pwj)

Unist’ot’en Camp stated on Feb. 10: “Our matriarchs were arrested while holding a ceremony to call on our ancestors and to honor missing and murdered Indigenous women and girls. We, the Unist’ot’en, know that violence on our land and violence on our women are connected. During the ceremony, we hung red dresses to remember the spirits of the murdered women, girls and two spirit people taken from us.”

Andrew Brant from Tyendinaga said the Mohawk are returning the support shown by First Nations in B.C. during the 1990 Oka crisis when Mohawks of Kanesatake, Que., faced the Canadian military over the expansion of a golf course. “We are going to stand with them now,” said Brant. “We’ve gotten driven out of so many places, this is all we have left. We can understand what they are going through.” (tinyurl.com/usuf43x)

How to support the Wet’suwet’en

Solidarity from other First Nations and allies during the unfolding climate crisis has increased support for Indigenous demands for “Land Back.” For how to support the Wet’suwet’en against illegal CGL pipeline construction, go to tinyurl.com/rppq5ke/. To contribute to the Unist’ot’en Legal Fund, go to tinyurl.com/tvg96xj/.