Transportation blockades and demonstrations have brought traffic to a standstill on rail lines and ports across Canada in opposition to a natural gas pipeline being run through western British Columbia. The actions spilled over into the Niagara Falls area on Sunday, Feb. 16, closing the Rainbow Bridge that links the Canadian and U.S. borders. 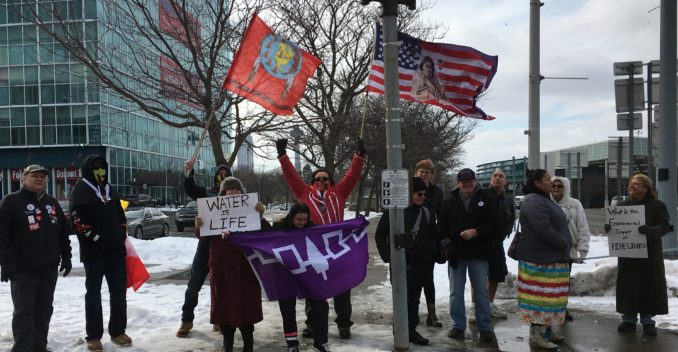 Traffic on the Canadian side of the normally busy international crossing ground to a halt for more than an hour after protesters marched from Highway 420 to gather at the bridge in Canada at about 3 p.m. Protesters also assembled in solidarity in Niagara Falls, N.Y., on the so-called U.S. side of the bridge.

The action was the latest in a string of blockades that have taken place in Canada as protest has mounted against laying the pipeline by Coastal GasLink through the Wet’suwet’en First Nation’s traditional territory. The first blockade, set in place Feb. 6, that led to a shutdown of passenger rail and freight trains across Canada.

In addition to supporting the Wet’suwet’en hereditary chiefs’ rejection of the pipeline, Sunday’s peaceful protest at the bridge also condemned actions by the Royal Canadian Mounted Police who arrested supporters land defenders from the First Nation territory.

Speakers at the protest also emphasized other injustices inflicted on Indigenous peoples —  from the torture of residential schools to broken promises on treaty rights, to inaction by the government as Indigenous women are murdered or go missing.

The nationwide protests and blockades have continued to bring freight rail shipping in Canada to a halt in some areas and led railway transportation provider Via Rail Canada to stopping passenger trains — all with an economic impact of millions of dollars.