Juan Guaidó returned to Venezuela after his tour of Europe and the United States [on Feb. 11]. He entered through the international airport of Maiquetía, in the state of Vargas, half an hour from Caracas. His arrival was announced in the morning and his reception by the government’s opposition was small. 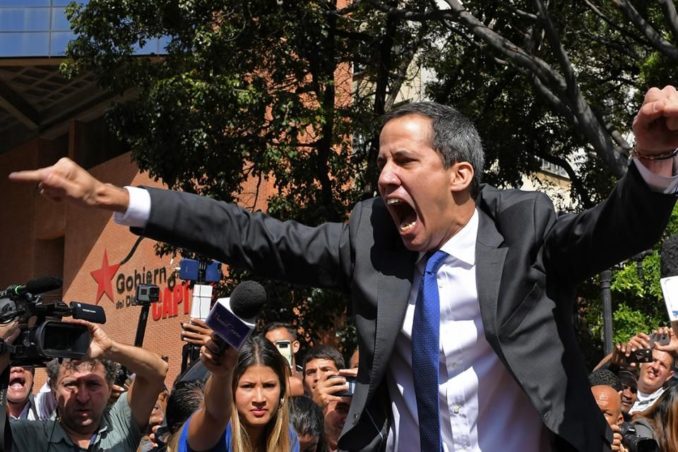 In the airport concourse, more supporters of the government, Chavistas, shouting, “get out” and “country sell-out” [or “traitor”] were waiting for him than were his own supporters. Among those who confronted and denounced him were workers from Conviasa, the Venezuelan state airline recently punished by the U.S. government as part of its economic blockade. (See videos of Conviasa confrontations: tinyurl.com/vakbcqw/.)

As expected, Guaidó had no problem entering the international airport, just as that happened last year.  At that time his departure via Colombia was organized by the Colombian government and the paramilitary group, Los Rastrojos. He entered again through regular migratory channels.

This self-appointed “president” arrived with his narrative going full blast after his international trip through Colombia, several European countries, Canada and the United States. It was on the last stop, particularly in Washington, D.C., that he got the photo opportunities which the pro-coup opposition [known as “golpistas”] had hoped for: bipartisan applause at the State of the Union address in Congress and a meeting with President Donald Trump.

Small turnout for Guaidó in Chacao

Upon leaving the Maiquetía airport, Guaidó went to the municipality of Chacao in Caracas, one of the city’s main opposition areas, to stage an event. Attendance was small. This once again exposed the gap between the reality in Venezuela and the media fabrication which projects diplomatic support of Washington’s power structure.

Guaidó showed he was incapable of attracting mass support — or even a moderate amount of support — despite his bombastic and triumphalist discourse. He is weighed down by his political errors, connections to corruption, disappointments and exhaustion — not just his own, but belonging to the entire opposition.

During his talk in Chacao, Guaidó announced that new steps will be taken to put pressure on the government of President Nicolás Maduro, without specifying what they will be: “There are things we will have to say when the time is ripe […] the steps to apply pressure will only increase, no matter how controversial they are.”

Guaidó called for unity among the different sectors of the opposition. This is a key goal in a scenario where the splits have multiplied among and within the opposition parties.  Above all, there are differences over the roadmap to be followed because a growing opposition sector no longer recognizes Guaidó as the so-called “president” or even as a leader.

The next few days will be important for the Guaidó strategy which aims to connect the international hype with national issues and to generate a scenario of mass mobilizations. Guaidó has been incapable of doing that for almost the entire last year, a situation that has been aggravated by the loss of his presidency of the National Assembly in early January of this year.

It was largely because of that legislative defeat that the United States created Guaidó’s international roadshow in an attempt to relegitimize him and indicate to the pro-coup sector of the opposition what the next steps will be to try to overthrow President Maduro — or if that’s not achieved — to change the current correlation of forces.

In the meantime, discussions are progressing between the Maduro government and increasingly broad sectors of the opposition — with international support, such as Russia expressed with the visit of Foreign Minister Sergei Lavrov [on Feb. 7] — to go forward with the National Assembly elections to be held this year.

It is not yet known when elections will occur or when, prior to that, a new National Electoral Council will be formed. The United States has already announced that it will not recognize that election and will seek to escalate the pressure to overthrow the Maduro government.