The southern coast of Puerto Rico was the epicenter of a 6.4 magnitude earthquake on Jan. 7. The same area of the island was devastated by a 5.9 quake on Jan. 11, with a 5.0 magnitude quake hitting the area on Feb. 4. According to the U.S. Geological Survey, between Dec. 28 and Jan. 15, Puerto Rico suffered over 1,280 earthquakes, with more than two dozen with a magnitude of 4.5 or greater.

The U.S. Congress passed the Puerto Rico Oversight, Management and Economic Stability Act (PROMESA) on July 30, 2016. It was designed by U.S. federal law, relying on the “Territorial Clause” of the U.S. Constitution, to restructure the Puerto Rican government’s massive debt for the benefit of U.S. banks.

The U.S. government appointed members of the dictatorial Fiscal Control Board  who imposed financial and political control over Puerto Rico. The board implemented a draconian austerity plan, eliminating essential services, such as medical care, schools, workers’ protections, and cut pensions and set up a minimum wage for youth. It barred Puerto Rico from receiving protection under the U.S. Bankruptcy Code or from negotiating with debt holders.

Workers World: Tell us about the relation between the earthquakes, the people and the overall economic situation in Puerto Rico. 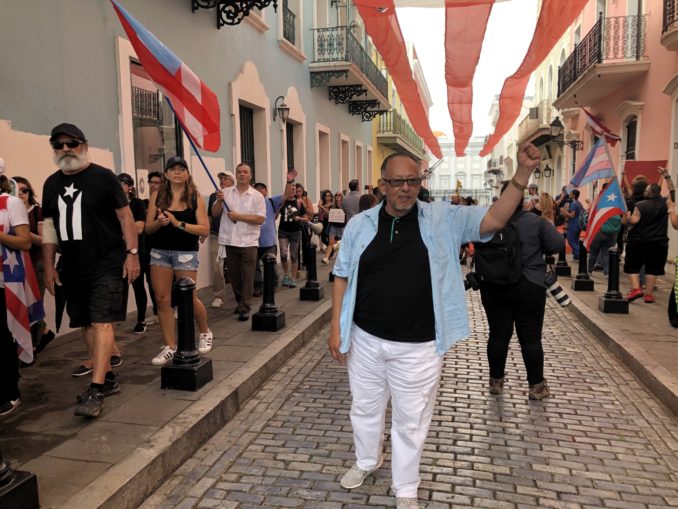 Alberto Barreto Cardona: There is a lot of resilience in Puerto Rico. In some way, people were trained by the experience of [Hurricane] Maria [in 2017]. They know that if they want to be taken care of, we only can depend on ourselves. If the government helps, okay, but we cannot put our hope in the government.

Since Maria, the colonial government has been very neglectful. Also, outbursts of racism have come from the U.S., particularly from Trump who has neglected Puerto Rico.

The reality is that the lack of governmental assistance is an outcome of colonialism and class. This is because most of the oligarchs who are Puerto Ricans are more concerned about sustaining their power than with helping people. So the importance here is the capacity of people — not only to organize themselves but to intervene in their own community.

It is important to acknowledge the racism that we have experienced. Also, Trump’s lack of intelligence is obvious. During an interview, he said the worst type of Mexicans are Puerto Ricans! He is not going to support any [disaster] assistance to Puerto Rico now. That is not a surprise to us because we know how he feels about the Latinxs at the border and the [im/migrant] children he keeps in jail.

So we are not putting a lot of hope in the U.S. government trying to help the infrastructure in Puerto Rico. And the colonial elite all belong to the Republican Party. Even Puerto Rico’s representative in Washington is part of Trump’s reelection [campaign]. We don’t have a lot of faith in the government intervening in [our] situation.

It is important to understand that at the same time this [crisis] is happening, [the government has] not relieved us from what they call “our financial obligation” to pay the debt. So on the issue of the debt, the infrastructure was already bad even before Maria because it had been neglected for years. Then Maria happened. And then these earthquakes. But the context is the demand for Puerto Rico to pay these loans, so they keep increasing all kinds of taxes. They tax people everywhere for any little thing.

We have a country that is depopulating. It is like a big gentrification project in Puerto Rico on a large scale produced by capitalism. It is produced by the reality that we cannot offer our youth jobs. So what you may have in Puerto Rico is an island of people of a certain age, of elderly people who are not part of the productive process. They have retired. They are not working anymore. Our youth are migrating to the U.S. Every time we have a climatic event, there is more [migration].

Thousands of people left [the island] as a result of this last earthquake [in January], based on their fear that the south of Puerto Rico will continue shaking. They are scared and they are coming this way. So we have the depopulation of Puerto Rico, and then we also have capitalist opportunists from this country moving in and buying land in Vieques [and] in Culebra. All the beautiful places in Puerto Rico are being bought by U.S. investors.

If you look at Puerto Rico and the example of Vieques, think about gentrification on a large scale — how people are being pushed out of Puerto Rico, and the population is being replaced by new landowners and investors from the U.S.  These investors are being given tax exemptions, but they keep taxing the Puerto Rican people. In reality, unless we have control over the life and land of Puerto Rico, and unless we become an independent country and achieve self-determination, we will not be able to correct this situation.

We know we cannot depend on anyone other than ourselves. Hopefully, out of this experience, we can consolidate a major movement for independence. We notice that whenever there is pain and sorrow, people find ways of collaborating and connecting with each other, even when there are differences. I am talking about those among the left.

WW: Would you talk about PROMESA?

ABC:  PROMESA is not [like] any other thing when talking about austerity. In capitalist production, austerity [is making the] people pay. That is what I mean.  [The government] cuts services and closes schools. In Puerto Rico, a lot of schools have been closed because [the government] is trying to reduce costs to pay this loan that [it] took out to maintain the economy. In Puerto Rico, the structure of production is disjointed internally.

We don’t decide the productive process. That is decided by a foreign class who do not live in Puerto Rico. Whatever investments they put into the economy [are] not in response to Puerto Rico’s productive needs. All money made in Puerto Rico is transferred to banks in the U.S. That money will never reenter Puerto Rico’s economy to affect the quality of life of the people.

So PROMESA means:  “Let the people of Puerto Rico pay by budget cuts on services — in medicine, schooling, housing, food stamps (we expect a major cut in food stamps) and welfare — so we can pay Wall Street. That is what PROMESA is. It’s about paying Wall Street — applying cuts in [services to sustain] human life, closing hospitals. We do not have a hospital in Vieques.  A lot of people are dying there. People are being affected by the lack of medical care.

WW:  Were left groups organizing there after the earthquakes?

ABC:  When I went there, nobody had labels or any way of identifying whether they were from the left, center or right. That is exactly how we want it because it is about community. It is about finding the strength of community and for the community to learn that [is] the only way they can sustain themselves around the contradictions of colonialism, poverty and climate change. Climate change also has to do with capitalism. You cannot separate climate change from how the capitalists profit from abusing nature. That cannot be disconnected.

We don’t want earthquakes. But whenever there is a major tragedy on the island, we keep discovering we all need to depend on each other because the oligarchs and the colonial government are just interested in sustaining colonialism and are not for self-determination and independence. But that is the only way we will have control of our island or our future and our destiny.

I can’t wait to go back there permanently.  I want to be part of this. I want to be part of what I see — an embryonic mass organization emerging that will translate into a true revolutionary path.  I could see it. I could feel it. And it will be so broad. All these different organizations — lesbian, gay, people who advocate for identity politics, Taino people, Afro Puerto Ricans — are linking with each other and finding a common enemy: U.S. imperialism.