Over 65 people gathered Feb. 2 at historic Seville Square in downtown Pensacola to kick off the fightback against 10 anti-LGBTQ2+ bills introduced into the Florida Legislature in the last two months. The rally, organized primarily by Strive (Socialist Trans Initiative), made Pensacola the first Florida city to come out so quickly against the right-wing bills. 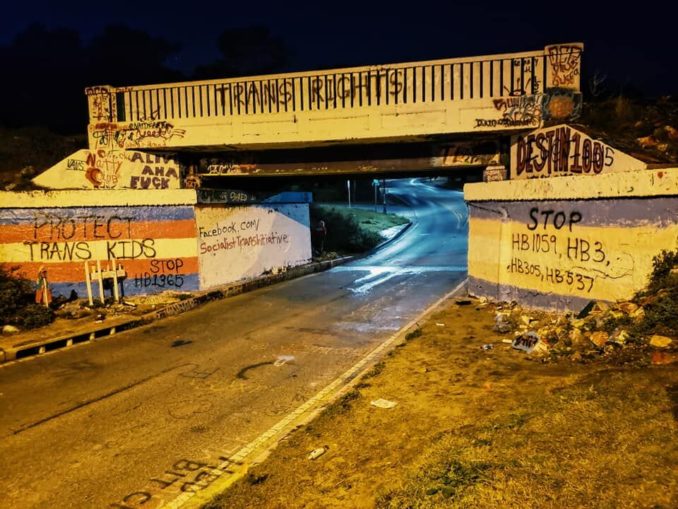 The famous graffiti bridge in Pensacola calls for Trans Rights as part of campaign to stop Florida anti-LGBTQ2+ bills.

Most pressing is HB1365/SB1864, which would make it a second degree felony, punishable by up to 15 years in prison, for a doctor to prescribe hormone replacement therapy or puberty blockers to transgender youth. Lack of access would force transgender youth to either delay or stop their transitioning process. The many trans youth already on blockers or HRT would be forced to stop. The rally focused on transgender youth because of this heavy impact.

A 16-year-old transgender man and high school student spoke to the crowd with a sense of urgency and fear: “If I didn’t have HRT, I wouldn’t have the confidence to walk up here and speak.” During the rally, five right-wing evangelicals attempted to disrupt, but after being called out publicly by speakers, all eyes were on them. After sizing the crowd up, the cowards realized they were outnumbered and fled as quickly as they could.

Rally speakers emphasized throughout that the reactionary legislative bills are a matter of life and death for trans youth.

A doctor who runs Pensacola’s only informed-consent clinic on gender issues spoke of the dangers of the bill. She said not only would she be forced to stop treating a lot of her transgender clients who are youth, this would lead to dangerous turmoil in the lives of trans youth. She cited thoroughly researched statistics on the amount of bullying, harassment, and suicidal thoughts and attempts that transgender youth go through. With HRT and blockers, these rates decrease significantly. Additionally, she could face prison time and the loss of her medical license if this bill passes, and she continues to help any trans youth further their transition.

In addition to the bill directly affecting trans youth, the other Florida bills (HB305/SB1126, HB3/SB1336, HB537/SB778 and HB1059/SB1634) are beginning to gain traction as multiple House and Senate committee hearings are held one after the other by right-wing Republican extremists. This is a tactic to get fascistic legislation passed by exhausting and wearing down LGBTQ2+ organizers.

But the Pensacola rally was just the beginning of what is now a statewide movement. Multiple organizations, including Strive and Students for a Democratic Society, have merged to form the Florida Coalition for Transgender Liberation, dedicated solely to defeating the bills.

The fight is on! Queer/trans Southerners are shouting, “No more LGBTQ dead! Kill the fxxking bills instead!”