Imprisoned since he was only 18, Charles Sims Africa was finally released from Pennsylvania’s SCI Fayette on Feb. 7.  The youngest and the last of the MOVE 9 to be paroled, Chuck, now 59 and recovering from cancer, was first eligible for parole in 2008 — after 30 years of incarceration. 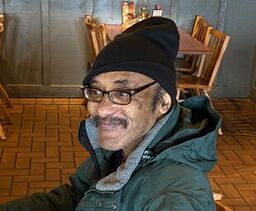 Twitter photo of Chuck Africa, posted by his lawyer, Brad Thomson, on Jan. 7.

Like all MOVE 9 members, he was repeatedly denied parole because he refused to renounce his political beliefs or admit guilt for a crime which he, and the others in the MOVE 9, did not commit. The nine had all been sentenced to 30-100 years for the murder of a Philadelphia police officer in 1978, despite overwhelming evidence of their innocence.

Chuck was brought home by a nephew, Mike Africa Jr., whose parents, Debbie Sims Africa and Mike Africa Sr., were released in 2018. It was Chuck’s first reunion with his family in 42 years. Current parole restrictions prohibit him from greeting other MOVE 9 members now living in Philadelphia.

For Mike Africa Jr., born in a prison cell shortly after the Aug. 8, 1978, police siege of the family’s Philadelphia home, his uncle’s release marks the end of a long and trying campaign: “It’s been 41 years, and now we will never have to shout ‘Free the MOVE 9!’ ever again.”

Nearly 42 years behind bars have taken a severe toll on Chuck’s health. He is recovering from cancer. Private, for-profit health care in the prisons too often turns delayed and denied paroles into death sentences.

“I’m appreciative of all the support from everyone.  I’m recovering from another round of chemotherapy and trying to spend time with my family right now,” Chuck told WW. His release marks the end of an historic struggle to free the MOVE 9, but it is by no means the end of their struggle to expose the racist, unjust system.

On Aug. 8, 1978, hundreds of Philadelphia police officers — with machine guns, tear gas, bulldozers and water cannons — surrounded the MOVE home.  The siege followed a prolonged blockade and occupation of the neighborhood, beginning in May 1977.

At a press conference this January, Delbert Africa described the confrontation brought on by Philadelphia police commissioner Frank Rizzo: “MOVE was peaceful, but we were suffering brutality at the hands of the police, so brutal that they physically kicked a baby out of the womb of one MOVE member and murdered Janine Africa’s baby, Life Africa.

“We made up what people thought were weapons so we could make an impression on city officials who saw a bunch of primarily Black people rescuing animals and growing our own food in an area of Philadelphia where the University of Pennsylvania and Drexel wanted to expand.

“Rizzo went nuts and started a blockade — not so much to keep us in but to keep community supporters out.  But the neighborhood responded and brought us food. The city tried to evict us; they got warrants naming people who never lived in the house. But just because it’s legal, don’t make it right. Slavery was also ‘legal.’

Delbert Africa, who spent time in prison with Chuck, told WW:  “It is with the strongest gratitude that I thank all for their support in getting the last of the MOVE 9 off this ‘prison activity’ we had to do on this revolutionary road.  Now it’s on to getting Mumia Abu-Jamal out!”

We will never forget

The struggle to free the MOVE 9 has played a key role in the last five decades of Philadelphia’s political movement, going back to the state’s attacks on the Black Panther Party.

When Mumia Abu-Jamal joined the Black Panther Party at age 16, he became a target of Cointelpro.  Now a world-renowned journalist and political prisoner, Abu-Jamal defended MOVE against Rizzo’s attacks. In 1982 he was unjustly accused of and imprisoned for the murder of a Philadelphia police officer.

As police commissioner, Rizzo launched widely publicized raids on three Black Panther Party headquarters in August 1970, just before the Panthers planned the Revolutionary People’s Constitutional Convention in this city. Heavily armed police attacked the BPP offices, arresting men and women, forcing them to strip naked, then handcuffing and photographing them at gunpoint.

MOVE members have suffered decades of imprisonment and the loss of loved ones. Following Abu-Jamal’s imprisonment, and still determined to wipe out MOVE, the state launched an attack on the group’s home on May 13, 1985, dropping a C-4, military-grade bomb on the compound. The resulting explosion and purposely uncontrolled fire murdered 11 men, women and children and destroyed 62 homes in the Black neighborhood.

Two who died in this horrific inferno were children of imprisoned MOVE members Janet Africa, Janine Africa and Phil Africa as well as Chuck Africa’s cousin Frank Africa. May 13 marks the 35th anniversary of this tragedy.  For the first time the surviving MOVE 9 members will be able to join in the commemoration.

Many view Chuck’s release as the end of the struggle, but Pam Africa, Minister of Confrontation for the MOVE organization, told WW: “MOVE will continue to fight. When people say the war is over, we say no, no, no! There are a whole lot of people left behind in the prisons, and not just political prisoners. A lot of people are suffering under the stranglehold of this government.

“To have Chuck pulled out of there is a victory.  Now our concentration is to bring Mumia home!”