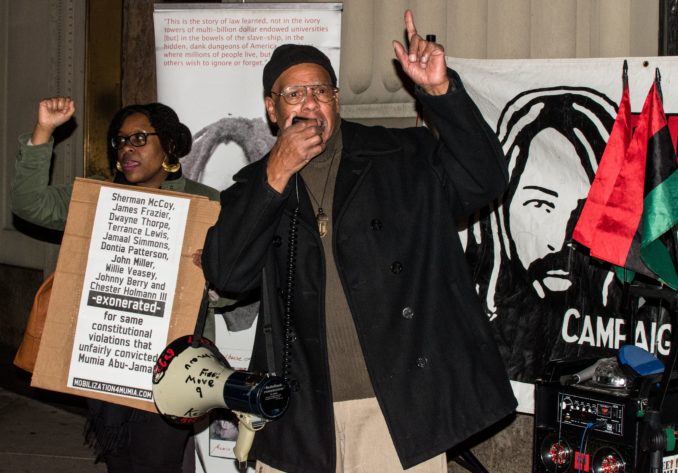 Mumia Abu-Jamal’s supporters rallied outside Philadelphia District Attorney Larry Krasner’s office on Jan. 31. That day he was expected to file his response to legal briefs filed in September by Abu-Jamal’s attorneys for Post Conviction Relief Act hearings and a request to remand the political prisoner’s case back to the Court of Common Pleas.

Rally participants instead learned that Krasner asked the court for a 30-day postponement. Once again, after 38 years of being wrongfully held behind bars for a crime he did not commit, justice is still denied to Abu-Jamal.

The rally drew attention to recent actions by Krasner’s office that resulted in the release of 10 unjustly convicted individuals. Minister of Confrontation of the MOVE Organization Pam Africa stressed, “Krasner, do for Mumia what you’ve done for these men here. Based on his innocence, he should be released like they were.”

Mobilization4Mumia issued a Jan. 30 press release, which stated: “Recent exonerations of 10 Philadelphia residents, unfairly convicted for crimes they did not commit reveal a simple truth — the Philadelphia police, courts and prosecutors convict innocent Black men based on gross violations of their constitutional rights. The same patterns of constitutional violations plague the case of Abu-Jamal.” (tiny.cc/733hjz)

Seven of the 10 men released in Philadelphia were convicted by former District Attorney Lynne Abraham, a “tough-on-crime” prosecutor who regularly sought maximum punishments and death sentences. As a Court of Common Pleas Court judge, Abraham arraigned Abu-Jamal in 1981. Years later as district attorney, she fought against his appeals in postconviction relief hearings.

Ineffective counsel, false witness testimony, witness coercion and intimidation, phony ballistics evidence, prosecution failure to turn over evidence to the defense as required by law, racist jury selection and other legal errors led to the exoneration of the 10 innocent defendants after they spent decades in prison. These are the same unjust practices that Abu-Jamal’s attorneys and supporters have witnessed since 1982.

Philadelphia is not alone. The National Registry of Exonerations counted 165 exonerations in the U.S. last year. The registry has tallied 2,549 wrongful convictions since 1989, unjustly incarcerating these defendants for a total of 22,540 years. (tiny.cc/3d4hjz)

In the late 1970s and early 1980s, Abu-Jamal was a daily radio reporter for WHYY and NPR where he earned acclaim for his award-winning reporting. As a journalist who reported fairly on the MOVE organization’s resistance against state repression, he drew the ire of the Philadelphia Fraternal Order of Police and the notoriously racist police commissioner, and later mayor, Frank Rizzo.

On Dec. 9, 1981, while driving a cab to supplement his income, Abu-Jamal came upon his brother in an altercation with police officer, Daniel Faulkner. Faulkner was killed. Abu-Jamal, who was then shot and severely beaten by police, was charged with Faulkner’s death — even though witnesses reported seeing another man, likely the passenger in the car of Abu-Jamal’s brother, running from the scene.

Imprisoned for nearly four decades, Abu-Jamal has maintained his innocence. He successfully won his release from Pennsylvania’s death row in 2011. He won the right to appeal his 1982 conviction in December 2018 because of biased judicial oversight by former Pennsylvania Supreme Court Justice Ronald Castille.

In early January 2019, Krasner reported finding six boxes of previously undisclosed evidence held by prosecutors in the case. After Abu-Jamal’s attorneys Judith Ritter and Sam Spital reviewed the material, they filed new appellate briefs in September of that year. They also requested that the case be returned for a hearing before the Philadelphia Court of Common Pleas based on finding concrete evidence of prosecutorial misconduct by the District Attorney’s office in Abu-Jamal’s 1982 trial.

Abu-Jamal’s lawyers argue the prosecution failed to disclose evidence as required and discriminated against African Americans when selecting the jury in his trial. They charge that his lawyer in 1982 did not adequately challenge the state’s witnesses. The attorneys also filed a motion revealing new evidence of constitutional violations, such as promises by the prosecutor to pay for or give leniency to two of their witnesses. Ritter contends that the new evidence shows Abu-Jamal’s trial was “fundamentally unfair and tainted by serious constitutional violations.”