Published in jornalmudardevida.net on Jan. 31. Translation by John Catalinotto.

Jan. 31 — The crisis that the U.S. created with Iran, which the Trump gang pushed to the brink of war, has nothing to do with the proclaimed “danger” of the Iranians making an atomic bomb. It is not that they had no desire to have it — or that they did not deserve to have it (in our opinion, they did) to more effectively defend their independence, as the case of North Korea seems to prove. The U.S. rage has other grounds. 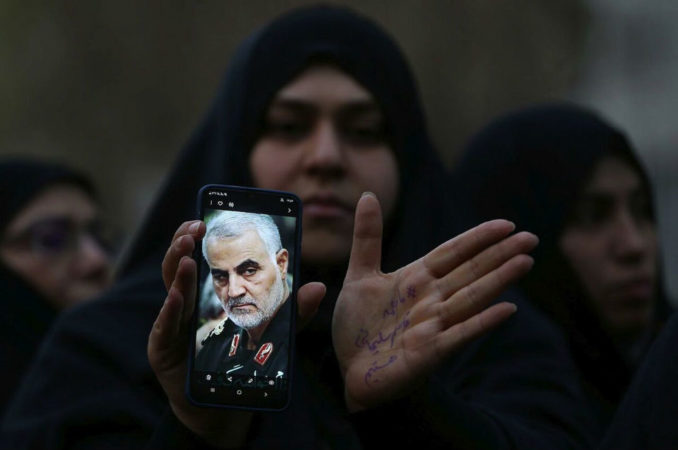 A mourner in Iran holds a portrait of Iranian General Qassem Soleimani, assassinated by U.S. military drone in Iraq on Jan. 2.

The point is that Iran, in the 40 years of independence it has enjoyed since the 1979 revolution, has become a country free from imperialist tutelage, whether U.S. or European imperialism. That is the crux of the matter.

Independence has enabled Iran, thanks in particular to oil, to develop economically and socially, placing it light years ahead of what the country was in the days of Shah Reza Pahlevi [ruled 1953-79]. In addition, despite the regime’s religious ideology, it is way ahead of the dictatorial regimes of the Arabian peninsula, which the U.S. and European imperialists are so keen to keep in power.

All the reports by the International Atomic Energy Agency — the U.N. body charged with monitoring Iran’s compliance with the 2015 agreement with the U.S., France, Britain, Germany, Russia and China — declare that the Iranians committed no violations. Furthermore, apart from Trump’s U.S., no other signatory has accused Iran of failing to comply with its commitments. The reason for U.S. aggressiveness arises elsewhere.

The Trump administration’s anti-Iran campaign, joined by Boris Johnson’s Britain, has a very concrete purpose: to prevent Iran from becoming a regional (namely economic) power that could change the so-called “balance” in the Middle East — which is already happening.

Now, this “balance,” which Britain set up historically and then the U.S. and its European allies maintained, is actually an absolute imbalance of forces with the imperialist powers in control and with the U.S. at the head.

This imbalance is the aim of the economic sanctions imposed on Iran. Always under U.S. command, they began in 1979, after the revolution that deposed the shah. Under various pretexts, they have been repeatedly maintained, re-imposed or strengthened by all U.S. presidents since then. In 40 years, they have only been relaxed for short periods: from 1981 to 1987, following the Algiers agreements, which ended the so-called “hostage crisis”; and from 2015 to 2018 by virtue of the multilateral agreement that Trump eventually tore up.

As is well known, Israel — which the U.S. has provided with nuclear weapons in violation of all the relevant treaties — and the Arab dictatorships, are the main agents of imperialism in the region, charged with maintaining that imbalance.

This is how the world’s most important sources of energy remain under U.S. and European domination. And also because an overwhelming military presence has been perpetuated for decades throughout the region — using military bases on land, naval squadrons, the latest generation of war material and thousands of troops.

Iran, especially since the U.S. occupation of Afghanistan and Iraq in 2001 and 2003, committed itself to breaking the siege to which it was subjected. Iran did this either by taking position in an Iraq torn apart by U.S. barbarism or by establishing contacts in Afghanistan with the Taliban resistance. (Iran succeeded to the extent of acting as a mediator between the Taliban and the U.S.)

On the other hand, Iran’s anti-imperialist and anti-Zionist stance gained it sympathy in Lebanon, the Gaza Strip and Syria. Iran established alliances in particular with the Hezbollah and Hamas movements and the Syrian government. The same goes for the Houthi rebels in Yemen, based on their opposition to Saudi aggression.

Considering Iran’s political influence unacceptable, Washington calls it “terrorist action,” thereby trying to cover up its own acts of state terrorism –  such as the assassination of General Qassem Soleimani.

In addition, Iran’s trade agreements and political rapprochement with Russia and China have helped it to sustain Teheran’s economic and political independence on the international scene, despite the sanctions and demonization to which the Western powers have subjected Iran.

Iran’s capacity for resistance is a major headache for U.S. imperialism. It also terrifies U.S. client states in the region, whose rulers can only stay in control based on U.S. power. It is all the more worrying for Washington and its puppets that Iran’s alliance with Russia and China favors the influence of these two powers in the region.

And the influence of China and Russia tends to expand and consolidate because it is based on a decisive argument: China’s growing economic power, for which neither the U.S. nor Europe shows any antidotes.

The decline of U.S. hegemony in the Middle East is part of the general decline of U.S. imperialism. This decline opens the way for the expansion of the new global state powers. It also exacerbates the dispute between old and new powers.

It is this decline that to a great extent explains why Europeans and other U.S. allies have recently accused the White House of “unpredictability” regarding the direction of its foreign policy.

It is also this decline that makes it possible to understand and expose the growing belligerence of the entire Trump foreign policy — tearing up agreements, breaking alliances, seeking new partners, strengthening mercenary ties with outlaw states (such as, in this case, Israel and Saudi Arabia), unashamedly threatening war and destruction in all directions. Ultimately, the sole focus of U.S. power is becoming its use of military weapons.

But the decline of the U.S. also represents an opening for the peoples’ struggle to develop and gain new dimensions. Despite the religious and reactionary nature of Iran’s Ayatollah-led regime, Iran, in serving the interest of a powerful national bourgeoisie, is confronting imperialism as very few national leaderships have the courage to do these days.

It is in this capacity as an anti-imperialist force — and as long as it remains so — that Iran must be unequivocally supported by the European and global left. Iran’s struggle will help to erode and bring down the main enemy of the people today, the main war maker threatening all of humanity: U.S. imperialist capitalism.