In France 1.3 million workers and their supporters struck, marched and protested Jan. 24 against the Macron government’s plan to create a single, point-based retirement plan to replace the current system. 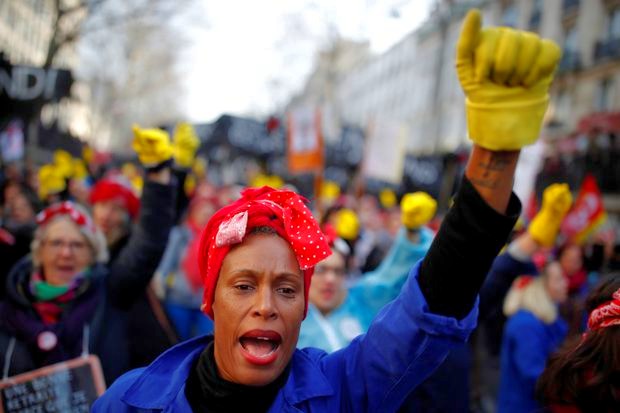 In Paris, 350,000 to 400,000 people came out, and there were big marches in most major French cities; these events were generally militant but not confrontational.

Yellow Vest protests on Jan. 25 were attacked by the cops with baton charges, tear gas and arrests. A number of protesters were injured.  French police have come under increasing criticism for their brutality, documented in widely seen internet videos.

The current retirement system has 42 specific plans for groups of workers who face difficult conditions on the job. So ballet dancers, who start performing at age 10 and whose bodies are exhausted by age 40, get to retire then, rather than be fired for “nonperformance.” Sewerage workers, whose life expectancy is 17 years less than the French average, also get to retire early. Transportation workers, who are outside in difficult weather conditions, get specific protections in their retirement plan.

The unions, which have been leading the struggle against the government’s plan since Dec. 5 with massive political strikes and six national demonstrations, assert that the current system – though it needs improvement – is based on solidarity, not individual performance.

While the exact percentage varies, all public opinion polls on this issue say a solid majority in France support the unions’ position. The government has bet on splitting “reformist” unions, like the CFDT (French Democratic Confederation of Labor), from the more militant unions like the CGT (General Confederation of Labor). Some sections of the CFDT, however, have resisted accepting the government’s plan.

A sign of strong popular support for the strikes and union participation are the “Rosie the Riveter” performances at protests and marches that began in early January.  YouTube videos, some receiving tens of thousands of views, document groups of women dancing, punching and kicking in chorus, dressed in workers’ blues with yellow gloves and red bandanas. They move to the song, “A cause de Macron,” which demolishes Macron’s plan as promoting “fake” equality and diminishing financial protections for women. (tinyurl.com/tvyvcoe) Attac France has an organizing kit on its website with the words, choreography and directions for costumes.

A Conseil d’Etat, a government advisory panel which goes over proposals the government submits to parliament, met Jan. 24 to examine the government’s retirement proposal. It found serious problems with its “financial projections,” especially with respect to the age of retirement, senior employment, unemployment insurance and minimum payouts.

There will be a new national protest/strike Jan. 29, the day before a government conference on funding the new retirement plan. The ongoing dock strike, which has shut down all of France’s major ports, will still be in force, along with the strike of electricity workers, which has led to scattered outages. Workers at some transportation hubs have decided to strike one day a week as long as the struggle against the government’s plan continues.