January 20 was not only the day to honor the radical legacy of the Rev. Dr. Martin Luther King Jr. It was also a day to acknowledge a victory for a group of Oakland mothers (#MomsHouse), who had been brutally evicted Jan. 14 from a house they “repossessed” in November. A press conference at Oscar Grant Plaza turned into a celebration for the Moms 4 Housing battle a half hour before the sixth annual MLK event. 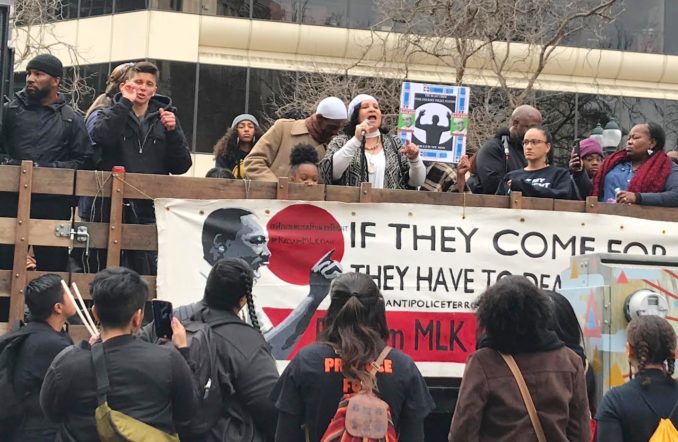 Moms 4 Housing organizers had announced the win in a text: “Huge news: We have reached an agreement to purchase #MomsHouse. Wedgewood will negotiate in good faith with the Oakland Community Land Trust (OCLT) to purchase the Magnolia Street home for ‘a price not to exceed the appraised value.’” Wedgewood is the multimillion-dollar investment firm that owns the previously vacant house.

The text continued: “This isn’t just a win for us. We fought for all of Oakland.” The organizers said Wedgewood Properties had promised to work with the Oakland Housing Department and OCLT to “negotiate a right-of-first-refusal program on [all] properties owned by the company.”

Carroll Fife, director of Oakland’s ACCE Action (Alliance of Californians for Community Empowerment), said this means Wedgewood will give the city, the land trust or other community groups the first chance to buy the homes, “so they remain permanently affordable.” (tinyurl.com/udupoz2)

The well-attended press conference featured the Moms and their supporters. Oakland City Councilmembers Rebecca Kaplan and Nikki Fortunato Bas announced the agreement with Wedgewood Properties. Fife berated the sheriffs for brutally evicting the Moms in the first place, “It is important to not criminalize women who are trying to bring attention to justice and humanity for everyone. They are not the criminals.”

Dominique Walker of Moms 4 Housing said in a statement, “Today we honor Dr. King’s radical legacy by taking Oakland back from banks and corporations.”

The sixth annual MLK march began immediately after the press conference. The event was organized by the Anti Police-Terror Project, a group that has been working for more than 10 years to counter police terrorism and violence against Black and Brown people in Oakland and around the country. APTP also supported the struggle of Moms 4 Housing.

The march in downtown Oakland began with a rally on a flatbed truck next to Oscar Grant Plaza — renamed by the community to commemorate Oscar Grant, who was killed 11 years ago by BART transit police at Fruitvale Station. A large banner on the truck read, “We stand with the moms. Housing is a Right.”

The first speakers were parents and family members of young people murdered by police. The mother of Shaleem Tindle reminded the crowd that it had been two years since her son was killed by BART police in West Oakland. Family members and supporters held pictures of their deceased loved ones during the rally.

A moving statement was read by two LGBTQ2+ disability rights activists. “Our disabled kinfolk are queer, trans, Black, Indigenous, people of color. Family members are dying. The cops are killing us. We are in detention centers, institutions, jails, prisons. We are thrown away on the streets.” The activists spoke about Kayla Moore, a transgender person murdered by the Berkeley police. Their parents and the community are still fighting for justice.

A 17-year-old “Oakland born and raised” young woman from Youth vs. the Apocalypse told the crowd, “Climate change is fueled by the same systems of white supremacy, racism, colonialism and greed that are running concentration camps at the border, closing our schools here in Oakland, enabling police murder and brutally throwing people out to live in the streets and fueling American imperialism.” 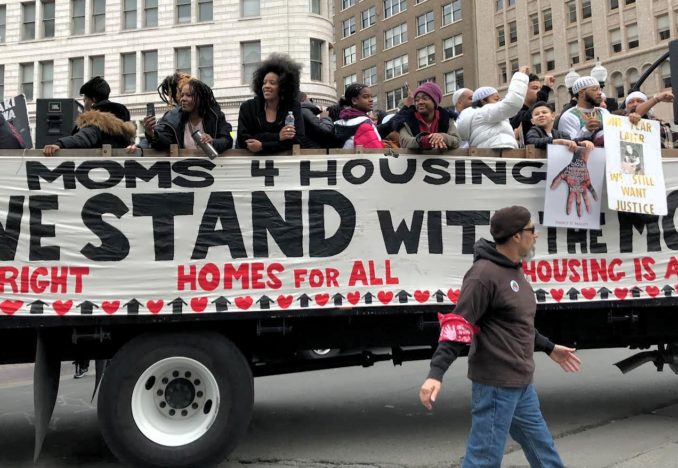 Following this rally, the crowd marched to the office of Alameda County Sheriff Gregory Ahern to protest his use of AK-47s, a tank and a battering ram against the Moms. Ahern is the top sheriff responsible for police terror against Black and Brown communities in Alameda County.

A large and vibrant group of children led the march chanting, “Housing is a human right.” The disability rights contingent followed the children. At a rally in front of the Sheriff Ahern’s office in the Alameda County

Courthouse, speaker after speaker criticized the brutality and racism of the sheriff’s department and conditions at Santa Rita Jail, the county prison for women. They continued to celebrate the victory of the Moms in winning a home for their families and reminded the crowd that the struggles for housing and the fight against police violence and terrorism in Oakland will continue until justice is won for all.