On the third day of their strike, 96 percent of the over 400 Clark College faculty voted to accept a new three-year contract that gives full-time faculty raises up to $11,064 a year and awards adjuncts, who are part-time teachers, equal status and similar pay raises as full-time teachers.

The contract will prevent Clark College in Vancouver, Wash., from shifting course loads to lower-paid part-time faculty. Instead of being paid a flat rate for each credit hour, adjuncts will be making a salary that is 65 percent of the full-time rate, based on their course load, with raises of 7 percent over three years. The union will push for the 65 percent to continue to rise until it reaches at least 85 percent.

This is the third successful strike by college faculty and adjuncts in the region. Portland Community College instructors won a contract in December that will pay adjuncts 70 percent of the full-time rate by Fall 2022. In June 2018, Washington’s Evergreen State College in Olympia won a similar contract for adjuncts. 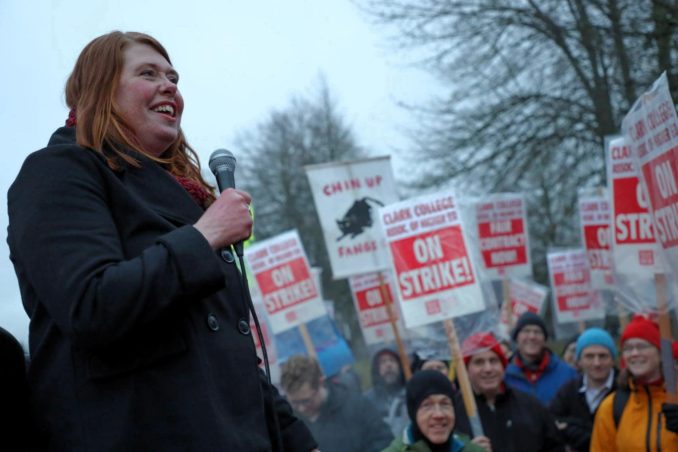 The strike came after 15 months of negotiations by the union, Clark College Association of Higher Education, an affiliate of the Washington Education Association.

“I see this as much bigger than just Clark College,” CCAHE President Suzanne Southerland told Northwest Labor Press. “It will influence other colleges, and ultimately the education that students are going to get.” (nwLaborPress.org, Jan. 17)