Dec. 30 — What happens when virulent, corporate-led gentrification meets the resistance and resilience of the Black community here in Oakland, where the homeless population increased to over 4,000 in two years? 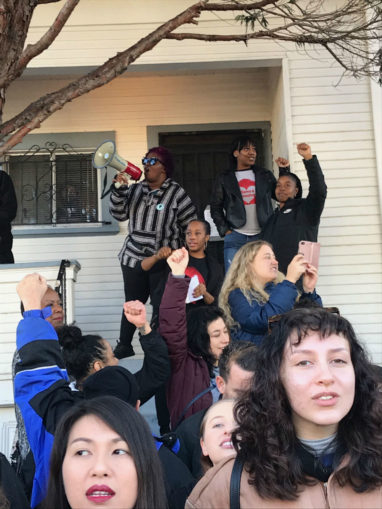 What happens is that a small group of Black moms “reclaim possession” of a West Oakland house that has been vacant for two years. This act has galvanized a strong movement that demands housing as a human right for all.

The Moms, led by cofounders of Moms 4 Housing, Dominique Walker and Sameerah Karim, moved into the vacant house on Magnolia Street on Nov. 18 and started to fix the place up. The property is owned by a multimillion-dollar investment company, Wedgewood Properties. First, Wedgewood refused to speak with the Moms, and then the company filed an eviction notice against them Dec. 6.

The Moms and their supporters have managed to beat back the eviction so far with the combined force of community-eviction defense and legal support.

The eviction legal defense, argued in court by attorney Leah Simon-Weisberg in late December, asked the court to approve and sanction the Moms’ possession of the vacant house as a moral and legal act “due to the severity of the housing crisis in Oakland.” While Judge Patrick McKinney did not allow expert testimony in open court, he did not dismiss the Moms’ case and put Wedgewood’s demand for immediate eviction on hold until he rules. He did take written expert testimony and the Moms’ arguments to read and consider in his ruling.

The Moms and the legal team agree that “no dismissal” is a victory at this point.

After the hearing, at a press conference outside the courthouse, the Moms gave some of the testimony they would have liked to have given in court.

Asked what she would say to the judge if given a chance, Walker said, “I would talk about the programs put in place to help, that don’t help. I would tell the court about all the applications that I [have] filled out, the application fees and the credit checks that led nowhere. I would talk about how violent homelessness is to my two small children, and I would encourage the court to consider that when making its decision.”

Another Mom, Misty Cross, spoke of how she has been working multiple jobs, paying taxes to the city and barely having enough time to spend with her kids, because she is working hard to make sure they have a stable home. “We are hardworking moms, and all of us hold [something] like three jobs just to make ends meet. That’s what I would tell the ones that think this [taking over the home] is a lazy tactic. This is a tactic that had to be done. We are mothers who took a stand — we had had enough!”

Oakland City Councilperson Nikki Fortunato Bas stated that this case epitomizes the struggle between the right of the people for adequate housing and the greed of corporate speculators like Wedgewood.

Bas pointed out that over the past two years, while homelessness has increased by 47 percent, the house that the Moms took over has been vacant but unavailable to people living on the streets. She further explained that while Oakland has 4,000 officially homeless people–the great majority of whom are African-American–the city has only 1,600 places available in shelters. There are an estimated 4,000 vacant houses in Oakland today.

“This is the crisis that these Moms have responded to,” Bas noted. They are “doing what any mom would do to keep their children safe and sheltered.” She called this a “crisis of profiteering and greed.” Bas concluded by stating that in this “conflict,” she is firmly on the side of the Moms.

Save the Moms’ House!

The grassroots effort to save the “Moms’ House” has been aided by organizations like Oakland ACCE (Alliance of Californians for Community Empowerment), which has a strong record of fighting for housing justice. Also active has been APTP ( Anti-Police Terror Project), which has been working since the murder of Oscar Grant to fight racist police murders in Black and Brown communities of the Bay Area and beyond. ACCE and APTP have trained many activists in eviction-defense techniques and strategies.

A Dec. 30 victory rally was held outside the Moms’ House in West Oakland celebrating the judge’s “no dismissal” ruling that kept the Moms in possession for now. But the battle to save the house and to win justice for the unhoused community in Oakland looms ahead.

And that’s exactly what the Moms and their supporters are continuing to do. The chant of “Whose house? Moms’ House!” echoed strongly throughout the crowd at the celebration.

Young mother and organizer Walker, just out of the court hearing, summed up the sentiment of the day: “Housing is a human right, a basic need, and it’s being used as a commodity. Corporations like Wedgewood are displacing us. They are poisoning our food, our air, our water, our soil, and now we don’t have access to even a basic need like shelter.”

She emphasized that the Moms are fighting not just for their house, but for all the people who need housing. “Even if we win this house, we are not stopping until everyone has a house,” Walker said.

For more information about this struggle, see moms4housing.org or facebook.com/pg/moms4housing/community/?ref=page_internal/.