Here are edited excerpts from a talk given by Workers World Party First Secretary Larry Holmes in Boston Dec. 14 on the 45th anniversary of the 1974 Boston March Against Racism. 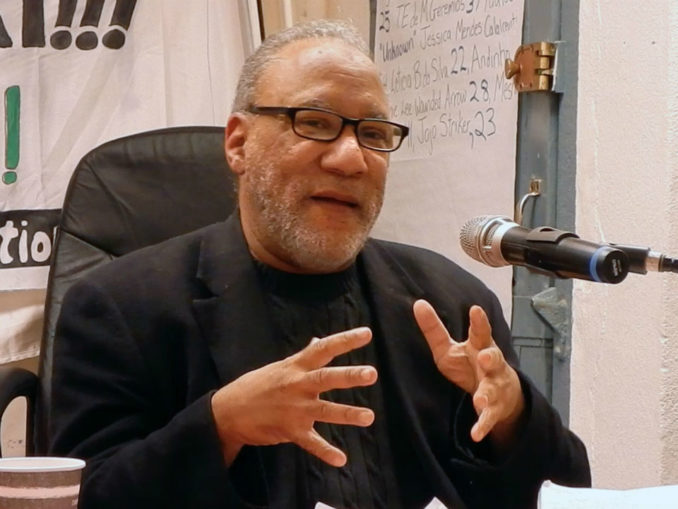 I was living in New York at the time of the march, as I have most of my life, even though I was born right here in Boston, in Roxbury. I was a 22-year-old ex-GI during the Vietnam War. For about a year and a half I had been a member of WWP, which supported me and other soldiers who were struggling against the war.

The thing about the march which was so incredible to me personally was how it demonstrated how powerful a revolutionary can be, especially if they are in an organization with other revolutionaries, when there is a crisis.

This is an important experience for a young revolutionary. It is one of the markers that influences their revolutionary path for the remainder of their life. This was a very racist, fascistic, dangerous situation.

People in more recent years recall Ferguson, Mo., and all the other places where Black and Brown people have been slaughtered by police and how there are not only local mobilizations but national mobilizations.

But back in 1974 Boston was the center of the anti-racist struggle, like no other region, including the South. It was an experience that in this city they had not seen: these mobs of white thugs attacking children on buses, beating them up, throwing rocks at them, attacking people on the street. It was quite something.

My recollection is that the movement, with a lot of progressive anti-racist people, somehow was paralyzed. So at the invitation and urging of our comrades in Boston, we decided we were going to intervene — we were going to have a national march.

We were a small party. We did not have that many members in that many branches, but this had to be done. The state was against us; most of the politicians were against us. “We don’t want outsiders coming here” — all that stuff. But we did this, and it changed the party in an incredible, historic, meaningful way.

Obviously it is not only an important chapter for the Boston branch of the party; it was a transformative chapter. You can talk about the bus drivers union [United Steelworkers Local 8751] and how it came out of the defense of the children, etc. We were coming, no doubt, to the defense of the Black community, to Black children, to Black parents — being in solidarity with them.

That was one aspect. Another aspect is that we are a workers’ party and we understood how, historically, racism is used to divide workers and that intervening in Boston at that period against racism was a way to assert unity for our class. It is important because some people say, “You want unity, then don’t talk too much about racism and everything will be nice.” That does not work. That’s evading the subject. That’s cowardly.

Our view has always been that to have unity you confront the racists and you explain to everybody — including progressive white people and white people who may not be so progressive but are susceptible to changing — that this is necessary, not only for equality and fighting racist oppression here. If the working class is going to do bigger things — ultimately defeat capitalism — then we are going to have to have this unity. So that class message was very important to us.

I was thinking about the period; that was one year before the official end of the Vietnam War, but the U.S. was already losing. The Vietnamese had already won. The war was winding down, and it was the beginning of the first capitalist economic recession in the post-Vietnam era. The war expenditures had artificially pumped up the economy and the stock market, but that was running out and the capitalist recession and crisis were beginning in the 1970s.

That was before Reagan and before Thatcher in Britain, who were sort of two sides of the racist, reactionary ruling class on both sides of the Atlantic. They imposed attacks on the working class: deindustrialization, the closing of auto and steel plants, the busting of unions, austerity, and more and more attacks. What is the ruling-class strategy? To derail the working class, to divide it, to try to stop it from fighting back. Racism is one of those things they use. And you can see from Trump that that strategy is just as potent and just as dangerous, if not more so, because of the world economic crisis, austerity and inequality, and all the other things that working people are fighting.

I’m going to try now to contextualize the lessons of Boston and the importance of unity against racism for today. On Dec. 12 there were elections in the north of Ireland, Scotland, Wales and England. It was the Tories (the main conservative bourgeois party) against the Labour Party. And the program that it has all been mobilized around — Boris Johnson, the Conservatives — is this racist Brexit.

Brexit won out and what we are dealing with is racism winning. The left there is down now, very demoralized, but that will pass. This is one of the bad things that happened like the election of Trump. As the capitalist crisis deepens, the working class will find a way to fight itself out of demoralization, out of confusion and to push aside this racism.

I am not worried about the future. We had the same struggle here.