Austerity imposed on Puerto Rico’s educational system by the unelected colonialist fiscal board was the target of a street rally in New York City on Dec. 14. The rally was called by the New York chapter of the Timón Committee, which works to raise awareness of special education rights — and of the struggles faced by people with disabilities and their families — both on the island and in the U.S. 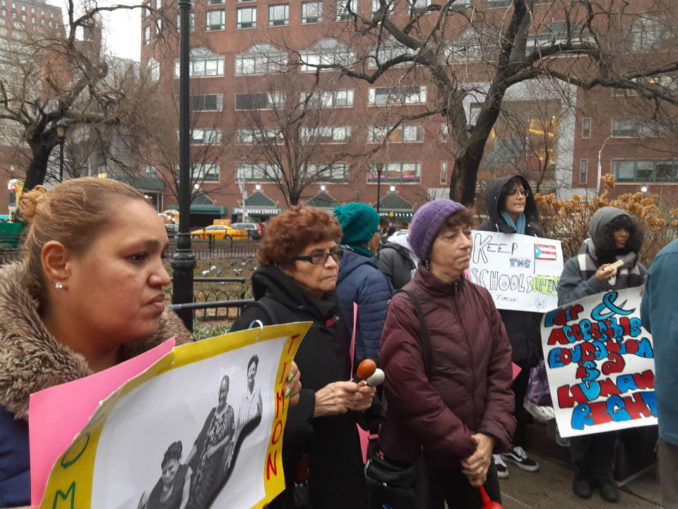 The parent organization in Puerto Rico continues to defend these rights against attacks, including layoffs, hundreds of school closings and most recently a proposed law known as Proyecto C 1945.

Cancel stressed that these cutbacks and other attacks push families to migrate from the island to the U.S., seeking assistance for their children, where mainland school districts are also being targeted by right-wing austerity forces.

According to the rally press release, draft bill 1945 “attempts to scale back provisions gained from Rosa Lydia Velez v. the Department of Education” and “excludes infants, depriving them of early intervention services.” The proposed law also “violates due process” in future judicial cases addressing special education. This class action case was originally brought in 1981, with a final judgment not issued until 2002.

Proyecto C 1945, approved by one chamber of Puerto Rico’s assembly and headed to the other, is strongly opposed by activists, educators and parent advocates on the island.

In New York, the special education struggle in Puerto Rico has been embraced by a coalition of Puerto Rican diaspora groups known as Frente Independentista Boricua, with solidarity from others who experience the daily inadequacies of the educational system.