A powerful strike rocked Colombia on Nov. 21, with millions participating across the country of 50 million people. The National Strike Committee initially called only a one-day strike to oppose anti-worker legislation. 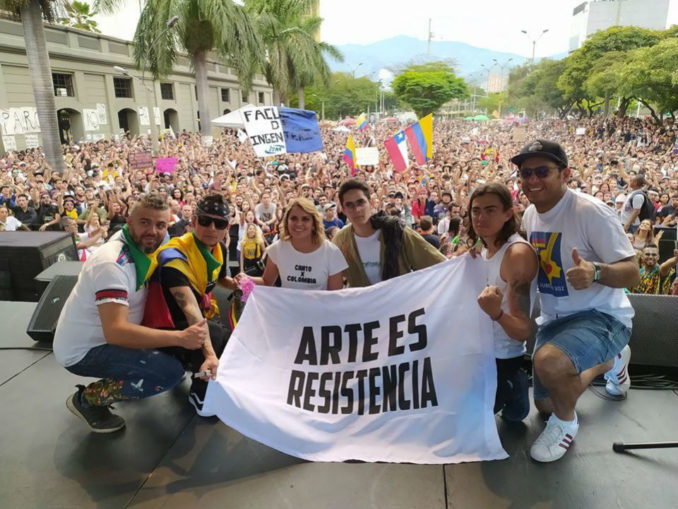 But masses of people have stayed in the streets for the past six weeks. They have now issued over 100 demands, none of which the right-wing President Iván Duque has agreed to.

The tax law that sparked the original protest — now approved by the economic committees of both houses of Congress — will result in lower tax rates for the wealthy and fewer government services for the vast majority of Colombians. Colombia has the second-highest rate of income inequality in Latin America. Most workers are low-paid,, with almost 50 percent engaged in informal, precarious work.

Additional grievances that drove the Nov. 21 mass strike — in which reportedly half the country took part — included legislation that would hurt pensioners and lower the minimum wage.

As the strike gained momentum, the movement in the streets raised demands about the rights of Indigenous and Afrodescendent Colombians, sexual violence, the assassinations of labor and social justice activists, the Duque government’s refusal to implement the 2016 peace accords with the Revolutionary Armed Forces of Colombia (FARC), and a range of other pressing issues.

After the police killing of 18-year-old Dilan Cruz at a protest on Nov. 25, demonstrators called for the government’s Mobile Anti-disturbances Squadron (ESMAD) to be dissolved. Signs bearing Cruz’s photo are now seen at demonstrations throughout the country. Four other people have been killed by ESMAD since Nov. 21. The government has intensified its militarization of the country by the increased presence of ESMAD in full riot gear.

For workers who have been protesting and have not returned to work, the last six weeks have been one long, continuous strike.

Multiple forms of resistance are being implemented, including “cacerolazos” (loud, pot-banging noise protests) and “plantones” (sit-ins). The National Strike Committee, which includes the Central Union of Workers (CUT) and a range of other unions and social organizations, has called additional day-long strike actions in response to Duque’s intransigence to their demands. The committee denied the president’s Dec. 3 request to call off the protests.

On Dec. 4, members of the Indigenous Guards made the 15-hour bus journey from Cauca to Bogotá, to press their demands. They carried their own red, black, green and white flag, and women held up pots of burning incense to “clean the badness away.” (Al Jazeera, Dec. 4) Their plan, for the time being, is to stay in the capital. 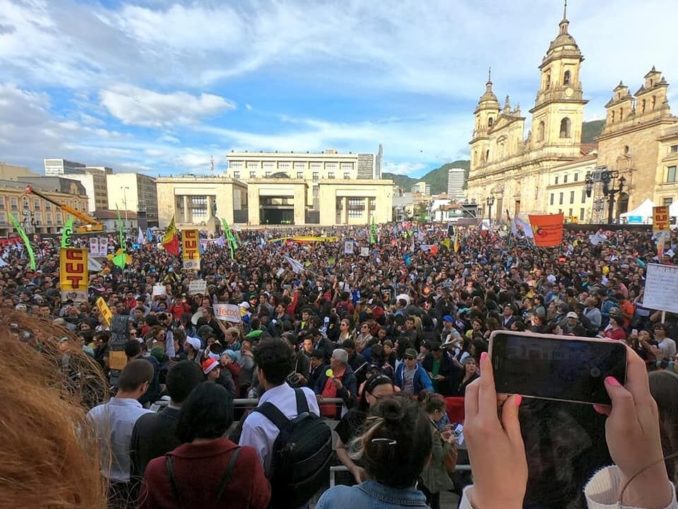 Well-known Colombian musical artists, including the Grammy-nominated band Bomba Estéreo, participated in mass outdoor concerts in Bogotá and Medellín supporting the strike movement. In Medellín a large group of concert-goers from the crowd performed the anti-patriarchal song “El violador en tu camino” (“The rapist in your path”), which was created by the Chilean group Lastesis and has become popular all over the world. Colombian artists working in all genres are part of the new movement.

Even Miss Colombia, Gabriela Tafur, took the opportunity to voice support for the protests during the Miss Universe pageant, held in the U.S. on Dec. 8.

Progressive elected officials, including Senator and former Mayor of Bogotá Gustavo Petro, have joined the protests. Inspector General Fernando Carrillo has called on the government to end the systematic assassinations by right-wing paramilitaries with ties to the state.

Since the strike began, among those assassinated have been FARC ex-combatant Manuel Santos Yatacué Ramos, environmentalists Natalia Jiménez and Rodrigo Monsalve — gunned down on the way to their honeymoon — women’s leader and cultural worker Lucy Villarreal and peasant leader Reinaldo Carrillo, who was shot to death in front of his family.

These kinds of government-sanctioned, targeted assassinations — along with kidnappings, terrorism, assaults, sexual violence, firings, evictions and other forms of brutal intimidation — are routine in Colombia and have been for decades. Since Jan. 1, 2016, almost 600 social activists have been killed — an average of almost two each day. For unionists, the country is the most dangerous in the world.

This courageous national strike for justice in Colombia has engaged the whole country — and inspired workers and oppressed people around the world.