Rylinda Rhodes was loud and clear, speaking here at a Dec. 18 rally outside Comcast world corporate headquarters: “I am a survivor of workplace sexual harassment at Comcast. … You do not have the right to touch me. I have a right to be protected in my workplace. Comcast, listen to your survivors!” Rhodes worked at a Comcast call center for five years. 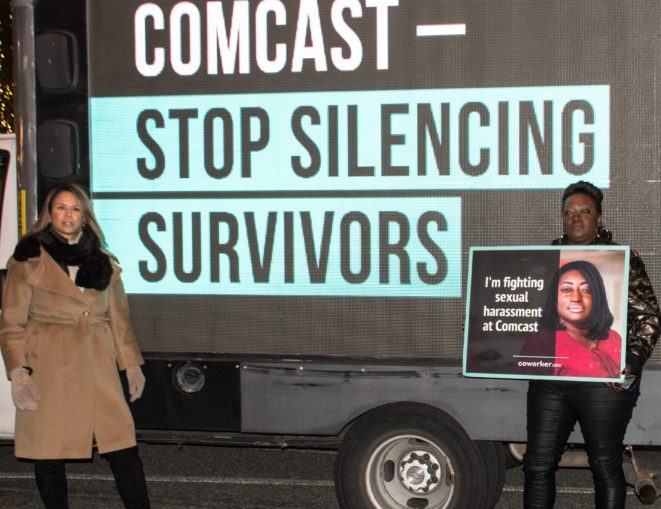 Then Sil Lai Abrams spoke as a survivor of rape and sexual assault at NBC, which is owned by Comcast: “How can a survivor who comes to you with their story of victimization expect to be heard? … You are supposed to help humanity. Instead you are a mega-media-conglomerate with tentacles that extend around the globe. In choosing to silence me, and other survivors at NBC as well, it’s an act of cowardice and an act of injustice that helps fuel rape culture. … We will not be silenced!”

Rhodes and Abrams were joined by over a dozen workers, community members and the women’s advocacy group UltraViolet at the evening rush-hour rally in frigid temperatures. As the rally continued, a mobile billboard truck with two-foot-tall letters, “Survivors Demand Justice at Comcast” and “Comcast — Stop Silencing Survivors,” drove around and around the Comcast skyscrapers.

‘Who do we believe? Survivors! What do we want? Justice!’

The action came after NBC launched an internal investigation into the popular television program “America’s Got Talent.” The network announced that judge Gabrielle Union left the series complaining of a toxic culture of sexism and racism.

Despite demonstrators calling for the corporation to fire NBC News President Noah Oppenheim, and anyone else who covered up harassment and discrimination to protect powerful abusers, NBC renewed Oppenheim’s contract.

Protesters also called for Comcast to put in place new policies to eliminate sexual harassment, abuses of power and discrimination. Organizers asked supporters to call Comcast’s Senior Director of Communications, Matt Heimke, at 215-286-8666 with those demands.

Comcast call-center employees have described experiencing a culture of sexual harassment and a hostile work environment. Employees report they have been retaliated against by both NBC and Comcast for coming forward.

UltraViolet Executive Director Shaunna Thomas explained: “The toxic work environment that Comcast and NBC Universal has fostered goes far deeper than one or two shows — or one or two bad apples. Between their dangerous approach of addressing abuse in the workplace only when it is exposed in the media, and their knack for launching bogus ‘internal’ investigations against perpetrators of harassment and abuse at the company, enough is enough. There is no holiday cheer in a toxic workplace, and Comcast’s 189,000 employees deserve better.”

Comcast is only one of many corporations that harbor toxic cultures hostile to women and trans people. Workers are increasingly demanding accountability from institutions, the media and individuals who create and tolerate workplaces with sexual abuse, perpetuate sexist narratives or seek to limit the rights, safety and economic security of women and gender-nonconforming people.