Dec. 20 — The U.S. House of Representatives voted to impeach the president on two counts late on the evening of Dec. 18. All Republicans and one Democratic House member voted against impeachment. 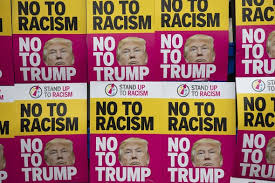 As of today, Speaker of the House Nancy Pelosi has not yet released the orders of impeachment to the Senate. Pelosi says she first wants to make sure the Republican leaders of the Senate will agree to a fair trial. So far Republican Senate leader Mitch McConnell has said he will do everything possible to defend the president.

This impeachment is the third in U.S. history. Andrew Johnson was impeached in 1868 and Bill Clinton in 1998. Neither of those two was convicted by the Senate. There seems to be no possibility that the Senate, which the Republican Party controls, will find Donald Trump guilty.

The charges against Trump involve his withholding U.S. military aid from Ukraine. Trump asked the Ukrainian government to first provide information implicating his Democratic political opponent Joe Biden in corruption as a condition of aid. Biden’s son, Hunter Biden, had a cushy job in Ukraine when Joe Biden was vice president.

The president has rightfully earned the hatred of large sections of the U.S. population. He has made incessant comments that are insensitive, crude, many of which can be classified as racist, misogynist and provoking violence, ranging from his slander of Mexicans to insults about African countries. He has waged war upon the poor of the United States and given handouts of tax cuts to the rich, while opening up Indigenous lands and natural resources for corporations to plunder.

The politics behind the charges

Some Congress members, like Democratic Rep. Al Green from Texas, have urged that Trump be charged in the impeachment process for inciting violence based on his racist comments. If the House had brought charges based on such anti-people crimes, impeachment could have been used to mobilize mass demonstrations on a progressive basis.

But the current impeachment by the House does not indict the president for crimes against humanity. Instead the House impeached him for failing to support  U.S. imperialism and for acting against the interests of the 0.001% of billionaires who rule U.S. society and dominate the world. In fact, the president acted in his own narrow interest in a strategy to attempt to win the 2020 election.

There are many people in the U.S. who hate — and some who fear — Trump for good reasons. The Democratic Party leadership has forced them, if they want to remove the president from office, to take sides with the reactionary Ukraine government and U.S. imperialism against Russia. Taking sides as such has nothing to do with the real interests of the U.S. people.

There is nothing this president or the Republican Party has done that has helped any section of the working class in the U.S. and nearly everything he has done has hurt oppressed workers, the poor, women, LGBTQ2+ people. Compared to these harmful acts, withholding military aid from Ukraine is hardly a crime — although the president did it for dishonest reasons.

The Democrats, although they want to use impeachment to defeat Trump,  have jumped right in behind the Republicans to support U.S. militarism. A recent example was their almost unanimous support for the new Pentagon budget, which passed the House for a whopping $738 billion earlier this month —  at the same time a presidential edict is about to kick nearly a million people, many children and seniors, off food stamps and into devastating hunger.

One of the few Democrats who opposed this giveaway to the military-industrial complex, Rep. Rashida Tlaib of Michigan — who is one of the “Squad” — said why she voted against raising this budget by $131 billion over two years: “I cannot support a bill that provides $738 billion for wars and defense contractors while this year we provided only $190 billion in discretionary funding for health care, education, and workforce development.”

Rep. Tlaib went on to criticize the U.S.-funded war against Yemen,  maintenance of the prison at Guantanamo, the new planned Space Force and new nuclear weapons provided in the bill.

Mobilizing to defeat these programs would be a big step forward in holding U.S. imperialism accountable.

Thousands of people all over the country demonstrated on Dec. 17 in dozens of cities supporting the impeachment process. At other times during the past three years, these or similar forces protested in the millions against the president’s misogyny, expressed solidarity with migrants or defended the environment.

It is reasonable that all these people would like to see the president removed, even if it means replacing him with an equally reactionary Mike Pence. But even if the president’s removal by the Senate were likely, the Democratic Party strategy does not lead to a truly progressive future.

This has been a decade of massive protest in the U.S. against the president’s agenda of hatred. There have been protests by people with disabilities for health care; protests for workers rights — from education to fast food workers — interlinked with protests against sexual abuse and for women’s liberation; protests for basic rights for LGBTQ2+ people; protests against racism, mass incarceration and killings by police; protest for migrants and against im/migrant concentration camps; protests against climate crisis and mobilizations by Indigenous peoples to protect the Earth. Millions have turned out in the streets and have shouted out for justice.

The impeachment process is proceeding through the mire of capitalist legalistic procedure. But people’s outrage generated by this president offers a chance for these many varied movements to interlink and use their power to forge a progressive path to the future.

The history of struggle teaches that representatives of the capitalist state — police or congresspeople or judges or presidents — do not create a just or a livable world.

Only the people in struggle will create a future in which we can live and flourish.