Question: Where are holiday carolers unwelcome this time of year? 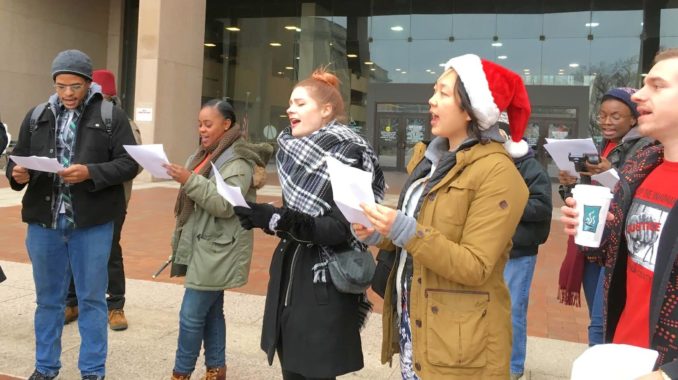 Singing rewritten carols outside Cleveland “Justice Center” after being kicked out for showing solidarity with county jail inmates. Cleveland, Dec. 16.

On Dec. 16, coalition members and supporters entered the center, which houses both the jail and Cuyahoga County Courts. They had rewritten four carols and one Hanukkah song to draw attention to a range of issues including: deplorable conditions in the jail, the need for bail reform, cruel judges’ harsh sentencing and housing juveniles in the adult jail. Before they could finish singing their second number, they were escorted out by Cleveland police.

The coalition was formed a year ago in response to a record number of preventable deaths inside the jail, along with documented reports of overcrowding, lockdowns, bad food and medical care, mistreatment by guards and other abuses. One of the group’s main demands is for bail reform; a high number of people held for nonviolent offenses would be out on the street if they could afford bail.

The county administration has made some improvements due to public pressure and negative media publicity, but serious rights violations are ongoing.