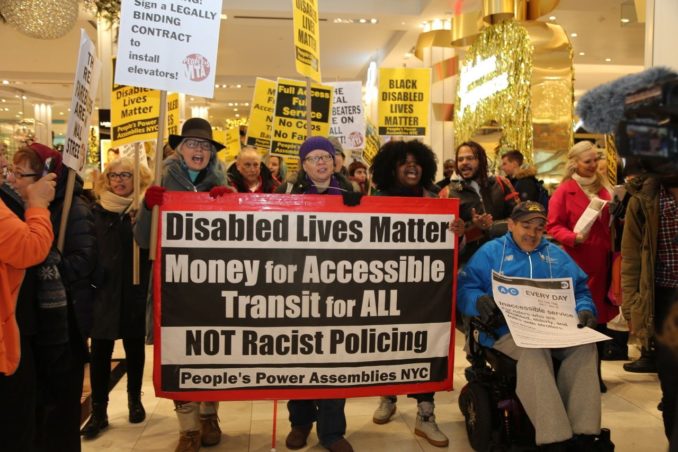 For the fifth consecutive year, People’s Power Assemblies/NYC marked the IDPD with a Dec. 3 protest inside of Macy’s, which linked struggles for accessibility and against police repression in New York’s mass transit system.

The PPA flyer declared: “We demand fully accessible transportation for all New Yorkers and real affordable housing and health care. We fight, each to their ability, against the murder, mass incarceration, warehousing and institutionalization of people with disabilities, especially Black and Brown folks.”

Then activists streamed through Macy’s department store on ramps between the floors, holding impromptu indoor rallies to make people aware that disabled people are not invisible and that disabled people are not disposable. Workers and shoppers cheered and encouraged the protesters on, as they proceeded to the last stop during rush hour Penn Station, where they chanted and held street meetings. Travelers waiting for trains stood around to listen, building small crowds.

One rally speaker quoted from the Rev. Dr. Martin Luther King Jr.’s famous “Letter from Birmingham Jail,” which has been used in the disability community’s fight for elevators against the MTA in both the courts and the streets: “We know through painful experience that freedom is never voluntarily given by the oppressor; it must be demanded by the oppressed. … Justice too long delayed is justice denied.” (See tinyurl.com/wamv4or for a video of the protest.)

Yudelovich is a person with emotional and hearing loss disabilities and an organizer for the WWP People with Disabilities Caucus.