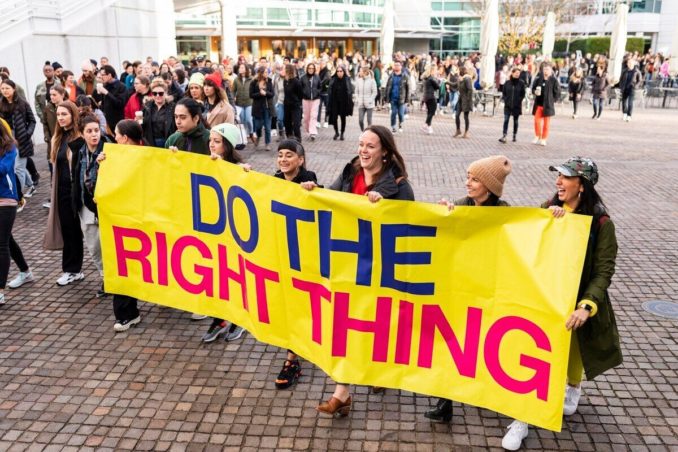 A protest erupted at Nike’s international headquarters here on Dec. 9 when over 400 workers demanded better treatment for women by male supervisors and a name change to the newly renovated Alberto Salazar building.

Salazar, head coach for the prestigious Nike Oregon Project, trains Olympic-bound runners. In September, Salazar was banned from coaching for four years for illegally doping and trafficking testosterone. In October, the Nike project was shut down. Nike CEO Mark Parker had been in close communication with Salazar to see if topical testosterone would trigger a positive drug test.

In 2018 women in the company led an internal uprising over repeated harassment by male supervisors who made vulgar, degrading comments to women workers. Former Project members, including Cain and Amanda Begley, have now come forward to expose the toxic culture created by the all-male coaching team.

In 2013, 16-year-old Cain was signed by Nike and began training with Salazar. “I joined Nike because I wanted to become the best female athlete ever,” said Cain in a 2019 New York Times Op-ed video series about women athletes. “Instead I was emotionally and physically abused in a system designed by Alberto and endorsed by Nike.” Cain was ordered to take birth control pills and diuretics to keep her weight to 114 pounds: “They were convinced that in order to get better I had to get thinner.”

Elite women athletes and dancers who reduce their body fat below 22 percent run the risk of compromising their health, with problems such as amenorrhea (abnormal loss of a menstrual cycle) and RED-S syndrome — energy depletion that affects metabolic rate, bone health, immunity, protein synthesis and cardiovascular health.

Cain experienced amenorrhea and broke bones during her Nike training. Tests on Begley revealed her body fat was only 11 to 12 percent.  Cain and Begley said Salazar weighed them publicly and shamed them as being “too fat” if they gained weight.

In 2015, Cain began having suicidal thoughts and started cutting herself. Salazar and the staff psychologist, who was not certified, ignored her when she spoke of the problems. Cain then decided to quit the team and stop trying to make the Olympics.

When Alysia Montaño, one of the top three female runners in the world, announced she was going to have a baby, Nike paused her contract and stopped paying her health insurance. This was in addition to her losing her sponsors during that time.

“Getting pregnant is the kiss of death for a female athlete,” said Phoebe Wright, a runner sponsored by Nike from 2010 through 2016.

Nike company flyers distributed at the Dec. 9  protest warned Nike workers they would be fired if they spoke to the media. It is typical policy for sponsors to make athletes sign confidentiality clauses to prevent them from fighting for change.

Other company flyers at the protest thanked the protesters for “walking with Nike” to celebrate what women bring to sports and to champion equality. Flyers also claimed that company management was committed to face-to-face time with workers to share ideas.

“Nike tells us to dream crazy; we say how about you stop treating our pregnancies like injuries,” said Montaño. “Then they tell us to believe in something; we say how about maternity leave? How about when you tell my daughter she can achieve anything, you back it up.”