Tens of thousands of people marched in Athens, Thessaloníki and other Greek cities on Nov. 17 to commemorate a student uprising, strongly supported by workers, that had been brutally crushed by tanks 46 years ago. This is an annual event. 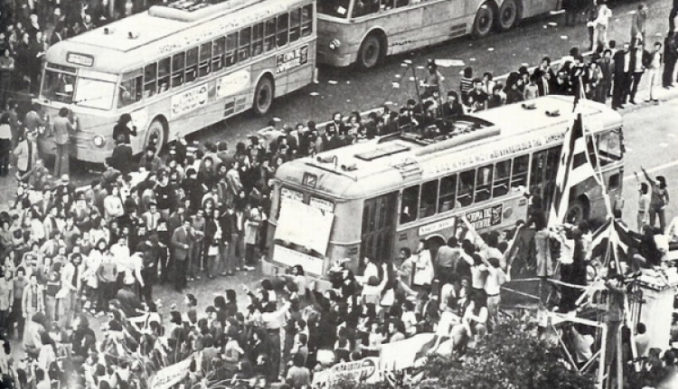 Students had occupied the Athens Polytechnic on Nov. 14, 1973, to protest the fascist military government (also called “Regime of the Colonels”) that from 1967 to 1974 served “by fire and iron” the interests of the bourgeois class at the expense of the people — while implementing plans of U.S. and NATO imperialists.

The students had set up an underground radio station that began agitating for people to come by. They asked soldiers to refuse orders to shoot the “brothers protesting,” raising a sharp challenge to the colonels in power.

While the colonels might have started their coup on their own initiative, they received billions of dollars in military and economic aid from the United States — money given within the framework of the Cold War against the Soviet Union.

This year’s march wound through the streets of Athens and ended at the U.S. Embassy, where European Union and U.S. flags were burned.