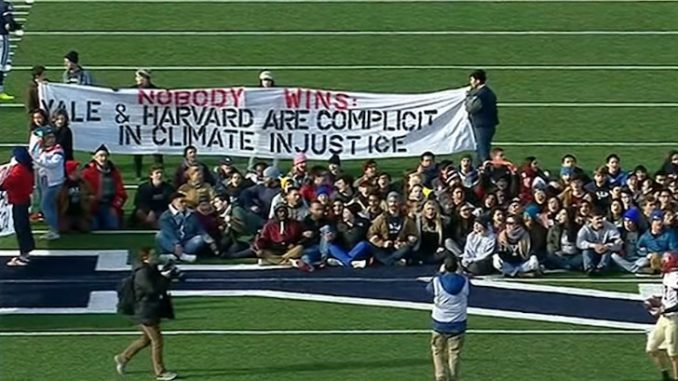 During halftime at the classic Yale and Harvard football game on Nov. 23 in New Haven, Conn., hundreds of protesters from both schools took to the middle of the football field with signs and banners to protest the complicity of both universities’ administrations in the climate crisis. The students are demanding that both schools, whose combined endowments amount to over $70 billion, divest from the fossil fuel industry.

Protesters also carried signs demanding cancellation of Puerto Rico’s debt in response to the devastation wreaked on the U.S. colony in September 2017. It was caused by both Hurricane Maria and the Trump administration’s ongoing racist and callous response to the island’s plight.

Dozens of students, faculty and allies were arrested, but not before the game was delayed by an estimated 48 minutes. The protest made international headlines due to social media publicity, especially on Twitter and Instagram.