Political prisoner and world-renowned journalist Mumia Abu-Jamal and his supporters are closer than ever to winning his release, 38 years after he was imprisoned for a crime he did not commit.

The Fraternal Order of Police, former district attorneys and other political higher-ups who participated in the frameup are now shaking in their boots because this innocent man may be given a new trial in which judicial, police and prosecutorial misconduct will be exposed. 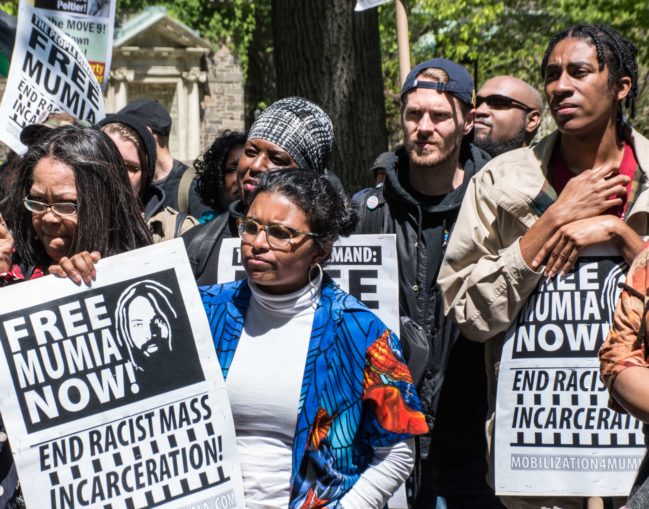 In the late 1970s and early 80s, Abu-Jamal was a daily radio reporter for WHYY and NPR who earned acclaim for his award-winning reporting.  As a reporter who supported the MOVE organization against state repression, he drew the ire of the Philadelphia FOP and the notoriously racist Police Commissioner and later Mayor Frank Rizzo.

On Dec. 9, 1981, while driving a cab to supplement his income, Abu-Jamal happened upon his brother in an altercation with Philadelphia police officer Daniel Faulkner.  Faulkner was killed. Abu-Jamal, who was shot and severely beaten by police, was charged in Faulkner’s death, even though witnesses reported seeing another man, most probably the passenger in Abu-Jamal’s brother’s car, running from the scene.

Imprisoned for nearly four decades, Abu-Jamal has maintained his innocence.  With global support, he successfully won his release from Pennsylvania’s death row in 2011. In December 2018 he won the right to appeal his 1982 conviction because of biased judicial oversight by PA Supreme Court Justice Ronald Castille.

In September 2019 Abu-Jamal’s lawyers filed new appellate briefs, including a request that the case be returned for a hearing before the Philadelphia Common Pleas Court based on their finding of concrete evidence of prosecutorial misconduct by the DA’s office in his 1982 trial.

A Sept. 9 press release from attorneys Judith Ritter and Sam Spital reads: “This week, Mumia Abu-Jamal filed a brief in PA Superior Court to support his claim that his 1982 trial was fundamentally unfair in violation of the Constitution. For example, he argues that the prosecution failed to disclose evidence as required and discriminated against African Americans when selecting the jury. And, his lawyer did not adequately challenge the State’s witnesses.

“Mr. Abu-Jamal also filed a motion containing new evidence of constitutional violations such as promises by the prosecutor to pay or give leniency to two witnesses. There is also new evidence of racial discrimination in jury selection.”

The evidence uncovered in the hidden boxes shows that Joseph McGill, the prosecutor in Abu-Jamal’s case, paid off witnesses with favors and cash, while allowing a cab-driver witness with a suspended license to keep driving.  McGill illegally struck down Black jurors and fixed outstanding cases of key witnesses.

DA Krasner under attack by FOP

In April of this year, DA Larry Krasner bowed to massive community pressure and withdrew his initial opposition to Abu-Jamal’s appeal moving forward in Pennsylvania’s higher courts. Following the September filings by Abu-Jamal’s attorneys, Krasner acquiesced to their petition that the newly uncovered evidence is grounds for the case to be sent back to Common Pleas Court.

This was the final straw as far as the FOP is concerned. They immediately launched an attack on Krasner, using Faulkner’s widow, Maureen Faulkner-Palkovic.  On Sept. 18, claiming “victim’s rights,” she filed a petition to have Krasner replaced by Pennsylvania Attorney General Josh Shapiro “in criminal actions in which there is an appeal.”  She alleges that the lack of “finality” in this case has caused trauma for her — completely ignoring the impact on Abu-Jamal’s family.

Faulkner bases her petition largely on unfounded claims that DA Krasner and attorneys in his office had some connection with Abu-Jamal’s case in the past. When her petition was dismissed by higher courts, Faulkner and the FOP tried another ploy.

Faulkner filed a King’s Bench Petition on Nov. 12 with the state’s higher courts, again requesting Krasner’s removal from the case.  In addition to charging Krasner with conflicts of interest in the Abu-Jamal case, Faulkner claims that Krasner should have colluded with former prosecutor McGill to bury the evidence.

The use of the “King’s Bench” application shows the growing desperation of the FOP team. Their petition would skip past the popularly elected district attorney and the Common Pleas Court. It would bring the matter directly to the PA Supreme Court where they hope for more sympathy from the conservative and classist institution.

Krasner is expected to submit a response soon to arguments from Abu-Jamal’s lawyers for a new trial — taking a stand for justice against FOP intimidation. The current FOP attack on Krasner is part of the 38-year effort to silence Abu-Jamal once and for all.

We who believe in justice will not allow that to happen.

Abu-Jamal’s 38th year of unjust imprisonment will be marked on Dec. 7 with a program titled “Youth Rise Up Against US Empire” in Philadelphia.  The event, to be held at Mastery Charter School-Shoemaker Campus, 5301 Media St., will include a report on all the new developments in his legal case, while focusing on his trilogy of books on U.S. imperialism.

Speakers and videos will express solidarity with the inspiring mass protests, many led by youth, taking place all over the globe as they call out white supremacist oppression and exploitation by U.S. capitalism.