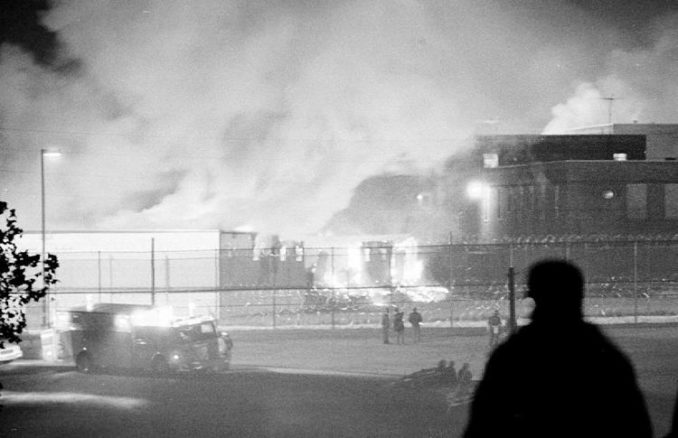 Fire rages in one of the multiple buildings damaged or destroyed during the Camp Hill Uprising in October 1989.

The prison, originally called White Hill, opened in 1941 as an industrial school for juvenile prisoners on 52 acres of property in Cumberland County. In the 1970s it was accredited by the state to house adult prisoners and certified as SCI Camp Hill.

When the uprising happened, the facility designed to house 1,826 prisoners was overcrowded with 2,600 men.

By the time the uprising was put down on Oct. 28, over 100 people were injured, including guards and inmates; 14 prison buildings were destroyed, with an estimated damage of $57 million. In the weeks that followed over 1,200 prisoners still housed at Camp Hill were kept in leg irons and handcuffs and denied showers until an American Civil Liberties Union lawsuit forced prison officials to back down.

In the three decades that followed, conditions for Pennsylvania prisoners have only deteriorated as draconian state and federal measures, pushed by the agenda of criminal justice policyholders, including the American Legislative Exchange Council (ALEC), were introduced.

ALEC is a Washington, D.C.-based public policy organization that supports conservative legislators. Launched in 1973 by Paul Weyrich (a Heritage Foundation founder and major New Right figure), ALEC exemplifies the overlap between the corporate sector and public policy. With over 40 percent of state legislators as members, ALEC represents a force in state capitols across the U.S. Of  more than 6,000 state legislators, approximately 2,500 are members of ALEC, including scores who hold key leadership positions.

William Barr, currently President Trump’s hit man as U.S. Attorney General, in 1995 was a hardcore ALEC member and poster boy who used Pennsylvania [as the launching site] for ALEC policies. Barr, Sen. Steward Greenleaf (minority chairman of the Pennsylvania Senate Judiciary Committee), and Rep. Jeff Piccola (Republican chairman of the House Judiciary Committee) did a press conference together about so-called crime to announce the agenda.

In March 1995, Gov. Thomas Ridge appointed Martin F. Horn as Secretary of the Pennsylvania Department of Corrections (PADOC), giving him carte blanche to make dramatic changes in the state’s prison system. Both Ridge and Horn were staunch members of ALEC and shared its prison policies agenda.

On Oct. 24, 1995, six years after the uprising, Ridge and Horn spent over $2 million and authorized a joint federal and state task force to carry out an attack on predominantly African-American prisoners at SCI Graterford, the largest maximum security prison in the state. The state’s attack took place just nine days after the Million Man March in Washington, D.C.

Horn’s policy manuals included  physical removal of prisoners to areas sufficiently isolated to effectively break or seriously weaken close emotional ties; segregation of all natural leaders; use of cooperative prisoners as leaders; and prohibition of group activities not in line with brainwashing objectives.

In 1996 President Bill Clinton signed the Prison Litigation Reform Act that terminated the consent decree and stripped prisoners of their civil liberties. In 1994 Clinton had signed a $30 billion crime bill, the largest in U.S. history, creating dozens of new federal capital crimes. On April 24, 1996 — political prisoner Mumia Abu-Jamal’s birthday [on death row at that time] — Clinton signed the Antiterrorism and Death Penalty Prevention Act which made capital appeals nearly impossible.

Fast forward to 2011 when “one-term Tom,” i.e., Pennsylvania Gov. Thomas Corbett, appointed his personal friend and fellow Board of Pardon member John Wetzel as Secretary of PADOC. Wetzel pledged to boss Corbett that he would reduce the state prison population and save money.

In fact, Wetzel, in the lucrative business of exploiting prisoners by selling cells, brought Pennsylvania prisoners back from other states to which they had previously been transferred. The move was designed to take advantage of federal stimulus money, which Wetzel used to pay correctional officials overtime while shaving the PADOC budget.

In 2017 the Vermont DOC paid the PADOC $7 million per year for three years to house 270 prisoners, until two died at Camp Hill. In January 2019, under an interstate corrections compact, 224 inmates from Delaware prisons were moved to  PADOC jurisdiction.

In conclusion, 30 years after the Camp Hill riot, the PADOC is not only “behind the times” —  it has gone from bad to worse. Wetzel is putting the finishing touches of oppression on prisoners, glorifying the Prison-Industrial Complex and allowing racist Jim Crow policies to be implemented by the policing industry.