Hands Off Venezuela PDX sponsored an Oct. 9 Skype event with Temir Porras, a revolutionary Chavista who served as a former chief of staff to both President Hugo Chávez and President Nicolás Maduro. He is a knowledgeable economist, who also served as Venezuelan deputy minister for higher education and in the foreign ministry. 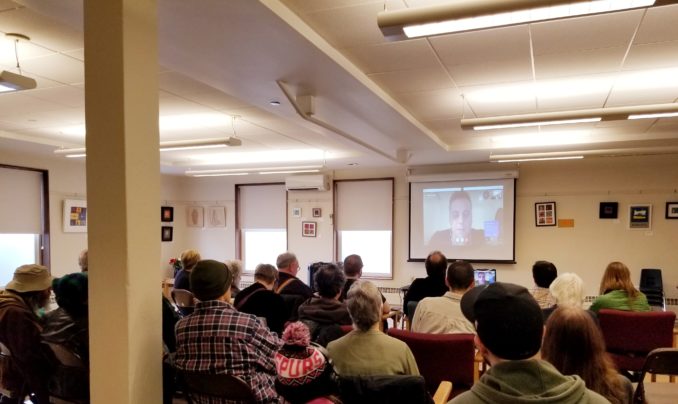 Porras pointed out that the desire for independence and national sovereignty runs deep among the Venezuelan people. The Americas were the first place in the Global South to achieve independence from colonialism. Simón Bolívar, the inspiration for the current Bolivarian revolution in Venezuela, began a continent-wide movement for independence from the Spanish empire in 1808.

Porras outlined the history of U.S. aggression toward Venezuela, including the U.S. idea of manifest destiny, the aggressive Monroe Doctrine, and the U.S. chauvinist aim to “civilize” the Western Hemisphere.

He pointed out the onslaught of U.S. repression against any country where popular forces demonstrate against imperialist penetration, and the U.S. portrayal of popular leaders, like Chávez, Maduro and President Evo Morales of Bolivia, as enemies of so-called liberal democracy.

In 1999, when Chávez was elected president, Porras began working with the Venezuelan government. He said that when Chávez called for a National Constituent Assembly, he was supported by 75 percent of the country. Porras called this Chávez’s democratic period which vindicated workers and poor people in Venezuela.

Porras said Chávez understood the importance of building a broad base of support. He made an effort to reach out to the most conservative factions to bring them into the conversations and to help them embrace the Constituent Assembly. Chávez also reached out to members of the upper classes who had much needed skills and expertise.

Porras recounted the history of the illegal U.S sanctions imposed on Venezuela beginning in 2006. In January 2019, Trump increased the sanctions formerly imposed by both the Bush and Obama administrations. Porras explained that any sanctions are illegal — that they are not authorized by the international community through the U.N.

In August the U.S. voted to impose secondary illegal sanctions which prevent other countries and businesses outside the U.S. from trading with the Venezuelan government.

At the end of his talk, Porras emphasized that U.S. sanctions have hurt the Venezuelan people on many levels and that the role of the U.S. left is to oppose any attempts to undermine Venezuelan democracy and to fight for Venezuela’s right to self-determination.