Haiti is devastated. The poorest country in the Western Hemisphere, one of the poorest in the world, is getting poorer. 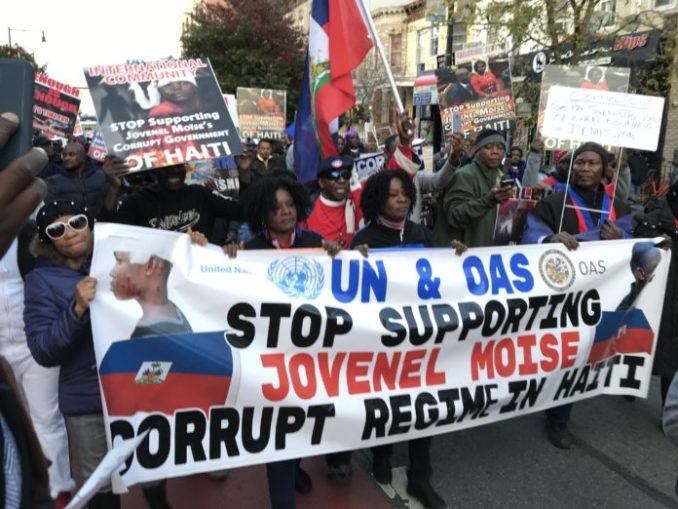 While some neighborhoods in Port-au-Prince, especially Cité Soleil, have large concentrations of poor people, most of the poverty in Haiti is found in rural areas. Heart-wrenching reports describe people with treatable cuts or contusions dying from their wounds because they don’t have the few dollars to pay for a doctor. (haitiliberte.com/erasing-the-dead/)

The Haitian government’s National Coordination of Food Security office calculates the country’s inflation rate at 22.6 percent. It reports that drought, caused by global warming, has lowered crop production in many parts of the country by as much as 12 percent.

For the past two months, hundreds of thousands of Haitians all over the country have marched, protested, built barricades and road blocks, shut down schools, factories and transportation, and kept up the pressure even as the cops killed over 35 people and wounded over 200, according to Amnesty International.  (tinyurl.com/sk5p2y5/)

The Haitian people are not just protesting because they are hungry. They want jobs, health care and housing to replace the hundreds of thousands of homes destroyed in the 2010 earthquake.

The New York Times, in a long, detailed Nov. 4 editorial, acknowledges the  “rampant corruption” and “lawlessness and endless other indignities” that have  “have steadily worsened the lives of people.” While the Times does fault the U.S. government for only calling for “dialogue” and not showing much concern, it proposes “long-term international assistance” to get Haiti “back on its feet.”

Haiti has a long experience with international “assistance.” Former President Bill Clinton, who proclaimed his long-term “connection” with Haiti, was basically in charge of spending $13 billion of international relief aid raised after Haiti’s devastation from the 2010 earthquake. He made certain that almost all of this vast sum never passed through Haitian hands. It circulated through U.S. businesses and banks with a strong presence inside the Capitol Beltway, as Jacob Kushner details in the Oct. 11 Guardian. (tinyurl.com/ty9te5v/)

Kushner also details a $70 million port project created by the U.S. Agency for International Development to replace the port facilities destroyed by the 2010 earthquake. Haitians had no input into the design or location of this new port. The project fell apart, and USAID was so embarrassed that it didn’t inform its Haitian partners.

What Haiti needs is not aid — designed more to benefit the countries granting it than Haiti — but reparations controlled by the Haitian people, used to remedy all the damages inflicted over nearly four centuries by U.S. and French imperialism.