Donald Trump chose Atlanta to launch “Black Voices for Trump” on Friday, Nov. 8. That 2020 election appeal was rebuffed by all but a few residents of this majority Black city. 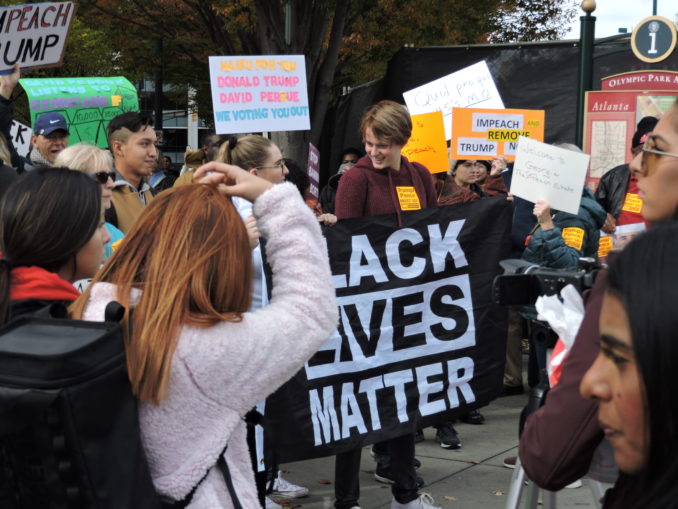 In order to gather the 400 people reported on the front page of the Nov. 9 Atlanta Journal Constitution, Black people were bused in from other states to the invitation-only event. Prominent members of the Grand Old Party, including Georgia Gov. Brian Kemp, helped increase the audience.

Outside, several hundred people marched from nearby Centennial Olympic Park to the Georgia World Congress Center to denounce Trump’s racist policies and rhetoric and call for his removal from office. Organizations that initiated the demonstration included the Georgia Alliance for Social Justice, the Georgia NAACP and Refuse Fascism.

Opponents of white supremacy took to the streets again on Nov. 9 when the United Daughters of the Confederacy held their national convention at the Atlanta Marriott Northeast hotel.

The UDC was founded in 1894 and to this day has been a champion of the “Lost Cause” version of Civil War history, erecting some 450 monuments, buildings, plaques and other tributes to the Confederacy across the country. As the movement to remove these vestiges of racist propaganda grows, the UDC has filed countless lawsuits to prevent universities, cities, counties and states from altering their “public donation” in any way.

Scores of Brookhaven and Chamblee police barricaded the streets leading into the business complex where the hotel is located, preventing demonstrators from taking their anti-racist message to convention attendees. Reporters were also denied access to the venue.

Numerous drivers on busy Clairmont Road honked their horns in support of the signs denouncing racism and white supremacy. 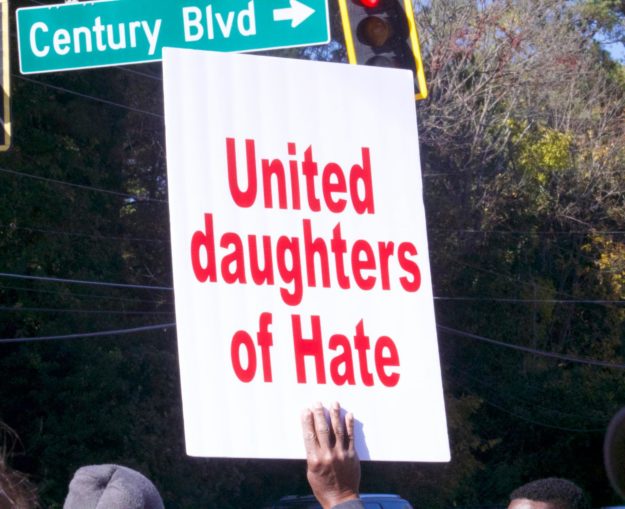 Protesting the United Daughters of the Confederacy, Atlanta, Nov. 9.

The protest to expose the ongoing racist activities of this organizational relic of the past was called by the Front Line Organizations Working to End Racism (FLOWER) Coalition.