The massacre was captured by TV cameras. Due to the collusion of the Greensboro Police Department, FBI and the federal Bureau of Alcohol, Tobacco and Firearms, then a division of the U.S. Department of the Treasury, with the Klan and Nazis, the murderers were acquitted by two all-white juries. 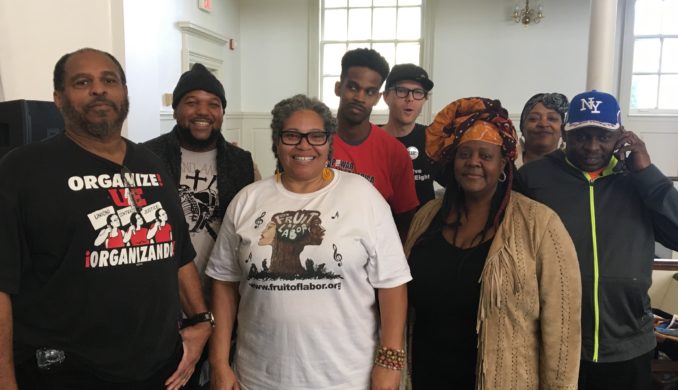 The recent conference honored the contributions of the five members of the CWP who were killed: Sandra Smith, William Sampson, Dr. James Waller, Dr. Michael Nathan and Cesar Cauce.

Rev. Nelson Johnson and Joyce Johnson hosted the conference, along with many other local activists from the Greensboro community who built the Beloved Community Center and the Faith Community Church to continue the pursuit of justice and reconciliation. Cultural and faith-based programs were featured to draw a wider community base, including a play by Emily Mann and a dance performance by Contra-Tiempo. There was also a memorial day of praise and worship church services. Rev. William Barber II, leader of the Poor People’s Campaign of 2018, addressed the crowd via video.

The conference hosted eight workshops on “Educational and Movement Building,” taking up the role each sector plays in building the movement. Workshop topics included youth and intergenerational organizing, labor and worker justice, legal and policy work, and faith-based and religious work. Other major focal points were climate change and environmental justice, struggles against racism and white supremacy, gender equity, justice for im/migrants, building local power, and cultural work and the arts.

Conference participants continually stressed that the CWP 5 had all focused on labor organizing in the South before they were murdered. Sandra Smith, who was African American, had been the Bennett College student body president, a worker at Cone Mills Revolution plant in Greensboro and chairperson of the union organizing committee there, and then a worker at Cannon Mills in Kannapolis, N.C.

William Sampson led a surge of rank-and-file union activity for worker health and safety at Cone Mills White Oak plant. He was president-elect of Clothing and Textile Workers (ACTWU) Local 1391.

Dr. James Waller, a founding member of the Carolina Brown Lung Association, screened workers for byssinosis (a lung disease caused by inhaling textile fiber dust), and fought for compensation for those sickened by it. Waller worked at Cone Mills Granite plant in Haw River, N.C., was elected president of ACTWU Local 1113-T and led the local in a strike against pay cuts in July 1978. Later that year, he was elected national president of the CWP-led Trade Union Educational League (TUEL).

Dr. Michael Nathan was chief of pediatrics at Lincoln Community Health Clinic in Durham, N.C., which was instrumental in serving Black and low-income children. He played an important role in helping workers unionize at Duke Hospital. He was also a main organizer of a major medical aid effort for freedom fighters in Zimbabwe in 1977-78.

Cesar Cauce was a data terminal operator at Duke Hospital and a leader of the union organizing drive there in 1978-79. He was also active with the Duke Workers Organizing Committee, which united hospital workers with members of American Federation of State, County, and Municipal Employees Local 77 and Operating Engineers Local 465 at Duke.

Conference participants stressed that the CWP 5 were doing more than organizing unions. They sought to build a broad movement to challenge white supremacy and capitalism by building a mass base of resistance among the most oppressed workers.

Eric Gill, financial secretary of UNITE HERE Local 5, stated at the labor workshop: “They were not just organizing a union, but organizing a revolutionary core of workers to fundamentally transform society.” He referred to the seven-city strike that UNITE HERE led in 2018, which involved 7,000 workers at Marriott hotels. Their slogan was “One job should be enough,” which Gill said is “our generation’s fight for the eight-hour workday.”

Bertha “Cookie” Bradley, a 21-year worker at Wendy’s, was a CWP member in Durham in 1979. Her experience helped her become a leader of the Fight for $15 per hour — today’s minimum wage movement. She stated that her long-term political commitment helped her fight the bosses, who offered her a $50,000 salary as district manager to stop her from speaking out publicly and organizing her co-workers. She refused the offer in solidarity with the workers and also to maintain her role as a worker in the movement.

Bradley stressed the importance of one-on-one organizing as critical in building broad workplace and community involvement in the working-class movement. She also stressed the need to connect workplace struggles with community movements for social justice. “We must organize the unorganized. Invest in the dis-invested. Our society has dis-invested in low-wage workers. You can see this dis-investment in schools, neighborhoods and housing,” she stated.

Jim Wrenn, who survived multiple gunshot wounds from the massacre, pointed out, “We were on the verge of launching an independent, progressive rank-and-file textile workers union in North Carolina.” He spoke of the TUEL’s efforts to build rank-and-file leadership, increase democracy inside unions, including the ACTWU, and expand union organizing among the state’s textile workers.

TUEL activists won leadership in several union locals in North Carolina and organized support for six labor strikes around the state in 1978 and four in 1979. Early in 1979, in reaction to TUEL’s emphasis on rank-and-file leadership, ACTWU’s top leaders placed five Cone Mills union locals under receivership; they suspended local officers and took control of finances and decisions.

The ACTWU had recently lost an election at Cannon Mills in Kannapolis, N.C., but was engaged in a nationwide boycott supporting unionization at J.P. Stevens plants in Roanoke Rapids, N.C. The TUEL, led by Waller, Sampson and Smith, was preparing to launch a statewide independent textile workers union prior to their murders in Greensboro.

Wrenn explained that the Greensboro massacre was a setback to union organizing in North Carolina, which unleashed a period of intense anti-union and anti-communist attacks on labor. After the decline and collapse of TUEL and an intense period of red-baiting — but influenced by the victorious 1978 Rocky Mount sanitation workers strike — workers in eastern North Carolina organized Black Workers for Justice in 1981.

The BWFJ’s community-based, rank-and-file, in-plant organizing committees across the state led to the establishment of the N.C. Public Service Workers Union, United Electrical Workers (UE) Local 150 in 1997. During 35 years working at Cummins Rocky Mount Engine Plant, Wrenn built the union there. He is now the N.C. statewide UE Local 150 secretary-treasurer.

Mavis Stith, a UE Local 150 member at the Cummins plant, and Wrenn, led the successful effort this year by the Phoenix Historical Society to persuade the state to erect a historical marker commemorating the sanitation workers’ strike, one of six strikes in the state in 1978. The marker says the strike “reshaped the labor movement in N.C.”

Wrenn explained his view that UE Local 150 is an independent, progressive, statewide social justice union, and it is a legacy of the 1970s workers movement that was attacked 40 years ago in Greensboro. In spite of the state making collective bargaining for public workers illegal, UE Local 150 has successfully organized thousands of municipal and state mental health and university workers, as well as manufacturing workers at over 15 N.C. workplaces. UE Local 150 efforts have won many crucial victories, such as raising wages to $15 an hour in five cities — and for all state employees. The local has also won reinstatement of unfairly fired workers.

UE Local 150 and BWFJ joined with the International Longshoremen’s Association Local 1422 in Charleston, S.C., National Nurses United and other forces to form the Southern Workers Assembly, which seeks to organize workers across the South and host workers’ schools. The SWA launched the Southern Workers Medicare for All campaign.

Wrenn called on everyone to support the SWA as a way to carry on the struggle for which the CWP 5 gave their lives 40 years ago.

The conference labor panel also discussed the growing strike wave across the U.S. Todd Warren, a Greensboro elementary school teacher and president of the Guilford County Association of Educators, raised the Chicago Teachers Union’s actions. He praised their recent strike, which not only took up workplace concerns, but raised major issues affecting students and their communities, such as smaller class sizes and affordable housing.

“The 1979 attack was an attack on organized labor,” stated Warren. “Shoutout to the Chicago Teachers Union which struck in 2012, setting off a wave of teacher strikes across the country. They were bargaining for the common good.”

Warren related the recent Chicago organizing to work in North Carolina and throughout the South: “Teachers and public workers have many restrictions on our union organizing like right-to-work and a ban on public sector collective bargaining. These are all Jim Crow laws.” He connected these struggles to the CWP 5, whom he praised as leading the way in North Carolina in fighting against racism and for workers power to push back white supremacy and capitalism.