Ever since Feb. 22, Hirak — the protest coalition in Algeria — has held a nationwide protest on Fridays, the day the weekend starts there. Students and youth generally hold their nationwide demonstrations on Tuesdays.

This Nov. 1, Algeria marked the 65th anniversary of the start of its War of Independence against France. It was also the 37th consecutive Friday that the Hirak coalition has held protests this year. 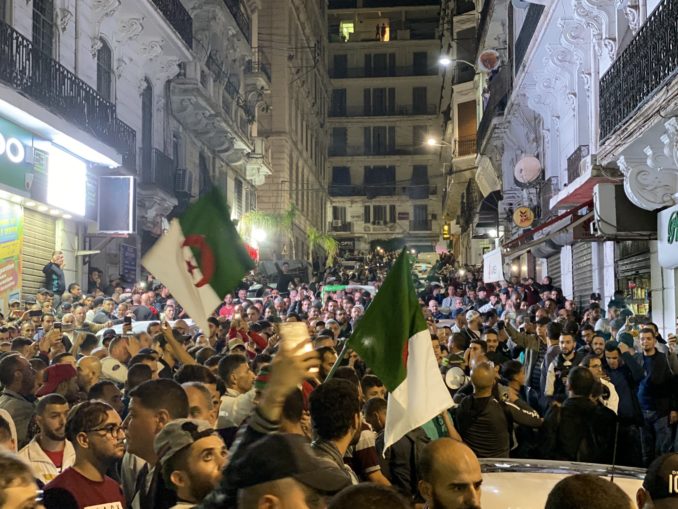 On Nov. 1, the demonstration in Algiers was gigantic — so big that it started Thursday night, Oct. 31. The spur that provoked such a turnout was the current government’s plan to hold new elections for president Dec. 12.

Many protesters from outside the capital city of Algiers arrived in the city before Friday because they expected the cops and army to block transportation. They stayed overnight with family or friends.

Numbers are hard to estimate. Wide avenues and big squares were filled with chanting, flag-waving protesters carrying both Algeria’s national flag and the Amazigh (Berber) cultural flag. Amazighs are a distinct national minority in Algeria making up roughly 30 percent of its population. Since June, over 20 protesters carrying the Amazigh flag have been arrested.

“Dump the generals in the garbage!” shouted some demonstrators. Other popular slogans included: “Civilian government, not a military,” “Power to the people, a constituent assembly, sovereign and revocable,” “Elections under a corrupt system are a wily trap” and “I am a member of Hirak, I am not voting.” (el Watan, Nov. 1)

The Hirak protests began in February when the people of Algeria decided that then President Abdelaziz Bouteflika should not run for a fifth term. When he agreed in early April to retire, the protests shifted focus. The demands put forward by Hirak were that all elements of Bouteflika’s “gang” had to leave and that a fair, equitable system of governing Algeria had to be created.

The army under General Ahmed Gaïd Salah, which has effectively run the government since Bouteflika’s departure, tried to hold elections in April, but couldn’t find candidates. A court canceled the elections the government scheduled for July.

The Algerian election authorities have now accepted five candidates for the scheduled Dec. 12 elections. Four were cabinet ministers under Bouteflika, and the fifth is the leader of a small party closely allied to Bouteflika’s.

The Hirak coalition’s massive Nov. 1 outpouring was in protest of these new presidential election plans.

When one of the candidates was discovered eating at a restaurant in west Algiers on Nov. 3, a demonstration quickly gathered and forced him out of the building and into his car, according to a report carried on French TV national news.

There are two major currents in Hirak. One will accept holding elections, if they are not obviously rigged. The other, which is supported by the left-wing parties, wants to hold a constituent assembly, which would make major changes in how Algeria is governed.

Roles of the U.S. and France

After Algeria gained independence from France in a brutal war that cost Algeria a million martyrs, it became a leader in the Non-Aligned Movement of the 1960s. Its current orientation has shifted quite a bit, which some recent events have made clear.

In 2018, Crown Prince Mohammed bin Salman of Saudi Arabia was granted a two-day state visit in Algeria. That year, before his visit, the Algerian Navy took part in the U.S. Africom maneuvers off the coast of Greece. More recently, Algerian forces participated in “Flintlock 2019” military maneuvers under U.S. Africom command in Burkina Faso and Mauritania.

France’s involvement in Algeria has far deeper roots, with colonial rule beginning in 1830 and not ending until 1962. Immigration of Algerians into France began in the early 20th century, ebbing and flowing since then, with a major influx as late as the 1980s. The Algerian community in France is now over a million people, including significant numbers who are first and second generation.

During Algeria’s War of Independence (1954-62), French police under the direction of Maurice Papon massacred pro-independence Algerian protesters in Paris in 1961 and threw over 200 bodies into the Seine River. Papon was later convicted for sending French Jews to German extermination camps during World War II.

After the massive Nov. 1 demonstrations, current French President Emmanuel Macron issued a tweet saluting the Algerian people’s “spirit of responsibility, in this period so crucial for its future.”

Though Macron extended “best wishes,” what his message actually conveyed was reluctance toward any direct, open involvement of France in the current struggles in Algeria. Given the history of the French colonization of Algeria, and the large number of people in the Algerian community in France, any neocolonial intervention would likely produce an immediate, significant backlash.