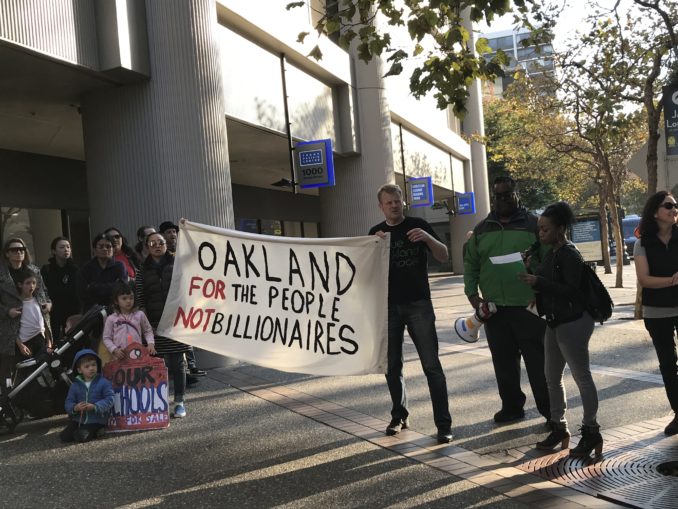 During a loud but peaceful protest Oct. 23 at an Oakland School Board meeting, Oakland city police and some of the school district’s own police force charged into a group of parents, children and teachers, and several people were hurt.

Teachers and parents who were beaten by the combined police force spoke frankly and forcefully about the injuries they received. Those attacked included members of the OEA and the Oakland Not for Sale Coalition. That coalition has been actively opposing the Oakland Unified School District’s “blueprint for quality schools,” which will lead to the closure of 24 high-need, high-poverty schools.

The Not for Sale coalition calls for stopping all school closures, dismantling the school-to-prison pipeline, fighting back against the charter school takeover of public schools and involving the community in reforming OUSD’s financial management. The coalition has protested at every board meeting since the beginning of the school year, sometimes taking over the meeting.

The Oct. 28 rally was opened by OEA President Keith Brown, who stood behind the banner, “Oakland for the people, not the billionaires.” He stated that school closures only hurt teachers, parents and the community, and reiterated the union demand that all community schools be kept open.

Saru Jayaraman, a mother of two children at Kaiser Elementary school, described how she was tackled by four cops and suffered serious injuries to her knee and shoulder. Her two young daughters witnessed the violent police attack and were severely traumatized.

A large contingent from the Black Organizing Project showed up at the rally to support the Oakland community. BOP has an ongoing campaign to push cops out of the schools and fund counselors instead. Jessica Brown, BOP organizing director, called for an end to the school-to-prison pipeline.

The OEA and other groups announced future actions to stop the closures and privatization of Oakland schools. For more information, check out the Facebook pages of OEA and Oakland Not for Sale.