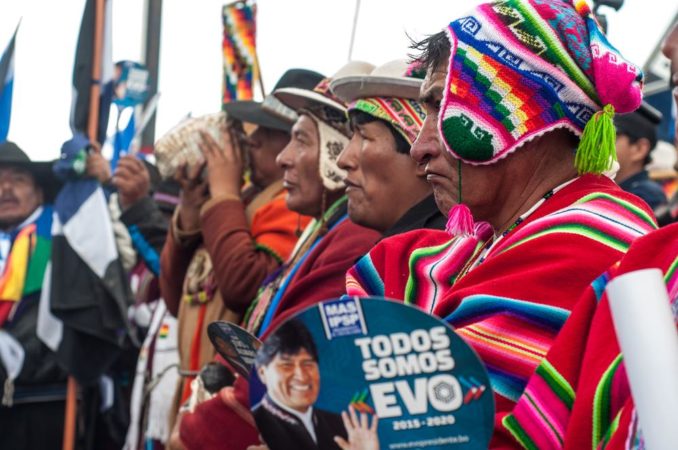 Morales’ supporters gather to defend his government, while his rightist enemies maneuver against him.

The city of La Paz has turned into a street game board where two opposing political blocs occupy squares. This confrontation has been repeated daily since opposition candidate [and former President] Carlos Mesa refused to recognize Evo Morales’ presidential victory last week. Protests began to take place, some of them violent, setting afire the headquarters of Morales’ governing Movement to Socialism (MAS) party and the Supreme Electoral Tribunal.

[Morales has been president of Bolivia since 2006, and is the first Indigenous leader of that country.]

Since then, Bolivia’s capital has become a city where from dawn onwards opponents begin to block the streets. They are usually small groups in central and wealthy areas.

The usual police response has been hands off, but this Tuesday, Oct. 29, to allow passage of vehicles, particularly trucks and buses, they stopped allowing blockades in downtown areas. The blockades have caused economic losses and transportation has been one of the affected sectors, generating confrontations between bus drivers and demonstrators.

To the noise of dynamite

That same Tuesday, social movements implemented the decision taken a day earlier at a rally held in El Alto with Evo Morales: to defend the victory in the streets and in particular to protect the seat of government, known as the Great House of the People. [El Alto is the Indigenous city of a million people nearby to, and at more than 13,000 feet, even higher than La Paz.]

During that day, delegations from different organizations arrived from various parts of the country. One was made up of mining cooperative members who toured different parts of the city in a mobilization marked by dynamite explosions.

Feliciano Mamani, president of the National Federation of Cooperatives of Bolivia,  said: “We, the miners, are here to ensure respect for the democracy that has been won through struggle.

“We want to respectfully ask the opposition to accept that they lost the election and that Evo Morales won,” he added.

The column of miners was found near the seat of government with members of the MAS, political leaders, workers and delegations of Indigenous movements from various parts of the country.

“We are supporting the president, our brother Evo Morales, because we have won at the polls and we are going to be supporting him until the end,” said Beti Gutiérrez, La Paz city councilor.

The defense of the seat of government and the center of the city will continue until a solution is reached. What will it be? It’s not clear yet.

Vice-President Álvaro García Linera offered to carry out a national audit [of the vote] with the presence of an “international arbitrator.” At the same time the opposition claimed that the agreement would only be accepted if the audit was “binding.”

Washington’s message has been to demand a second round [in the election]. As Secretary of State Mike Pompeo tweeted Oct. 28: “We call on #Bolivia to restore electoral integrity by proceeding to a 2nd round of free, fair, transparent, & credible elections with the top two vote winners.” (Washington Post, Oct. 29)

People who have mobilized have resolved to hold on [as long as it’s] necessary. The opposition, for its part, has also repeated that it will maintain what they have called a strike, which has left several wounded, both in Santa Cruz and La Paz. From dawn to dusk, the capital is the epicenter of this dispute. Evo Morales describes opposition tactics as a planned coup d’état in full swing.