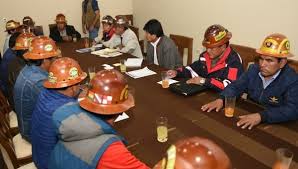 Published by mundo.sputniknews.com on Nov. 2. Translation by John Catalinotto.

The town hall meeting held by the Bolivian opposition in La Paz on Oct. 31 was well attended. It was the expression of a new correlation of forces where, for the first time since Evo Morales began his presidency in 2006, opposition sectors managed to summon a mobilization of this magnitude in the center of the country’s political power.

The phenomenon is characterized as a “moment of emerging struggles” by Álvaro Zárate, an anthropologist and member of Columna Sur, a youth organization within the Movement Toward Socialism (MAS), the ruling party.

“There are several sectors that are joining together, under the themes of regional demands, racism, business demands, from universities, doctors or environmental groups,” he explained.

The meeting in the La Paz town hall, as well as the mobilizations that the opposition has been carrying out day after day, are heterogeneous spaces with different demands and speeches that range from a rejection of Cuba and Venezuela to the need to protect the environment.

The complexity of the [right-wing] mobilization has, however, agreed on an objective that has been heightened from the day after the Oct. 20 elections until now: no longer asking for a second round but for the annulment of the elections and the resignation of Evo Morales.

But who decided there should no longer be a second round, but [rather] elections without Morales and Carlos Mesa [the former Bolivian president who was runner-up in the Oct. 20 presidential election]?

Who leads the mobilized opposition to Morales? Zárate names several people who lead from the shadows, such as “Carlos Sánchez Berzain, the former government minister of Gonzalo Sánchez de Lozada, who is leading from Washington NGOs, and Branko Marinkovic, the president of the first Santa Cruz Civic Committee of 2008.”

Other figures have emerged, the main one being Fernando Camacho, who “with a group of businessmen lead the Civic Committee of Santa Cruz and lead this attempted coup d’état.”

That two people have been killed and several wounded increases the tension in this postelection conflict in Bolivia.

The [current] scenario leaves traditional political parties aside, a phenomenon that has been going on for several years. Zárate situated the decline of the parties after the referendum vote of Feb. 21, 2016, held to find out if Evo Morales could run again for president [which Morales won].

Zárate explained: “The parties lost legitimacy; the only formula for defeating President Morales was to unite behind a nonparty banner. In the case of Comunidad Ciudadana, it was a short-term alliance; they had to put up a candidate, who turned out to be Mesa.

“The figure of Mesa, or the mayor of La Paz, as well as the October election, has already passed to second place in importance,” Zárate continued. “The real enemies are the [right-wing] radicals who do not come representing a political party and instead seek to carry out a coup d’état. Mesa did not attend the town hall meeting; he was booed several times, and he announced that on Sunday [Nov. 3] he will hold an ‘extraordinary assembly of the Citizen Community.’”

Along with that [attempt] comes a new phenomenon: Camacho, the main emerging figure, gained strength not only in Santa Cruz but also in La Paz and Andean areas. “Never had the Andean sectors accepted leadership from the east,” analyzed Columna Sur. [The eastern region is the center of political reaction.]

“The behavior of Evo Morales has been nonconfrontational, that is what he has told us, and we will always bet on peace and democracy,” emphasized Zárate.

This has meant MAS mobilizes to maintain a presence in the street without confrontation, in a scenario where, as the Bolivian government has condemned, the right seeks to generate violence, wound and kill.

Along with that, the [right-wing] gamble is on a binding audit in which 30 specialists from the Organization of American States participate. “If at any time the OAS recommends that we go for a second round, President Morales is willing; he is going to give everything possible to defuse this violence that comes from only one side, from a sector that wants to ignore the election,” explained Zárate.

What will the mobilized opposition say if the audit validates the results of Oct. 20 and indicates that Morales won in the first round? And if, on the other hand, the audit indicates that a second round is necessary, will they then not participate? Have they reached the point of no return?

It is a complex scenario, where, within the diversity of those who are mobilized [on the right], there is a leadership that has made the decision to carry out a coup d’état.