Hundreds of thousands of Haitians — particularly the poor of the poorest country in the Western Hemisphere — came out on the streets of Port-au-Prince and every city throughout the country Oct. 20 to demand President Jovenel Moïse depart. 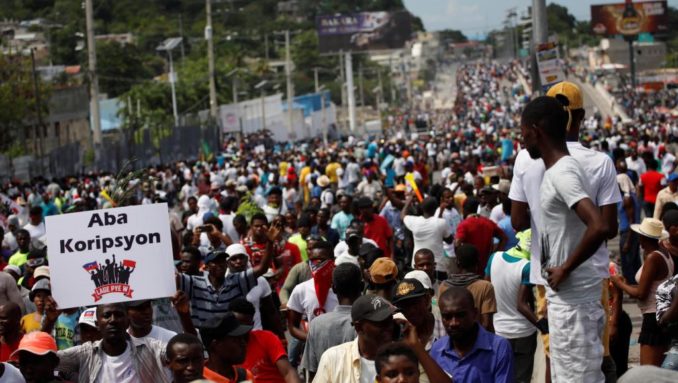 Haitians take to the streets on Oct. 20.

The regime’s refusal to concede has forced demonstrators to continue into the fifth week of their insurrection, tearing the country into shattered tatters.  No schools have opened; hospitals are closed or are without essential medicines like those supplying oxygen; no public transportation runs; gas stations are closed; inflation is rampant; hunger, always present, is growing more intense; major roads are impassable due to people creating barricades.

Moïse is using force to maintain his tenuous and very fragile presidency. His party, the Bald-Headed Haitian Party, won its first election in 2011 only due to the very vigorous intervention of then Secretary of State Hillary Clinton. U.S. intervention in the 2016 election was muffled but obviously present.  Moïse won in the second round in 2016 with just over 20 percent of the electorate voting.

Without the continuing support of the United States and the police force trained and financed by the United Nations to the tune of $7.5 billion over the past 10 years, Moïse would be long gone.  The U.N. couldn’t have spent this much money in Haiti without the consent and approval of the U.S. government.

Under a lot of pressure for being a foreign military force occupying Haiti, one that twice had introduced cholera to the population, causing thousands of casualties, the U.N. withdrew its last remaining military forces on Oct. 15.  But the police force it created, financed and trained will remain, including its “conflict resolution programs,” a fancy name for social control apparatus.

The U.S. ruling class will still be able to use the U.N. presence as a veil for its activities in Haiti. The U.N. has withdrawn to the wings but is still on the stage.

How tenuous Moïse’s hold is can be seen in two incidents: an armed protest demonstration in Gonaïves, a major coastal city north of Port-au-Prince, and a wreath laying in honor of Haitian independence leader Jean-Jacques Dessalines.

On Oct. 10, a big popular demonstration calling for the ouster of Moïse was accompanied by groups of armed individuals firing in the air to encourage the cops to stay in their barracks. (tinyurl.com/yxrprsvr)

It has been traditional for the Haitian head of state to lay a wreath at the tomb of Jean-Jacques Dessalines, the founder of the state of Haiti, who was assassinated at Pont-Rouge in 1806.  But protesters in Pont-Rouge said that if Moïse tried to appear, it would be the last day of his presidency.

Hundreds of thousands of protesters did come out in Port-au-Prince to protest Moïse laying the wreath Oct. 17 at the statue in a national museum. But hundreds of cops surrounded the museum, keeping the president well protected, and he kept the ceremony very short.

In the Haitian press, there have been reports of different committees being formed to handle the post-Moïse transition.  Some reflect the bourgeois elements in the protest movement and others include trade unions and community organizations.

The Haitian people have made it clear that Moïse must go and that the United States, through the agency of the U.N., should stop interfering in Haiti’s internal affairs.