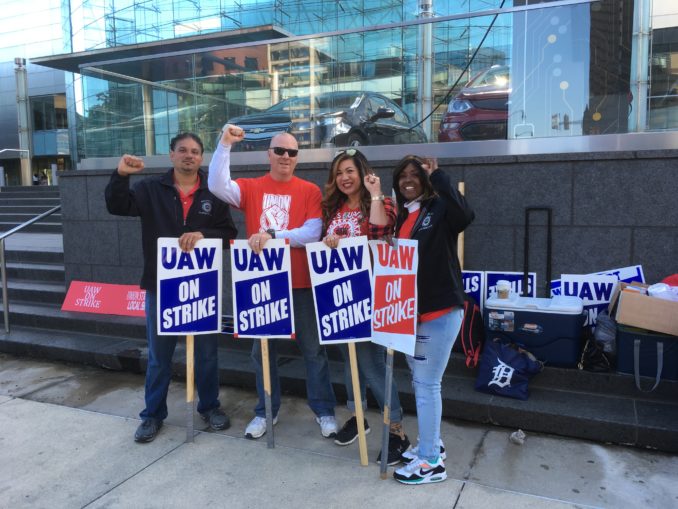 In 1848, in “The Communist Manifesto,” Karl Marx and Friedrich Engels made an astute observation about the emergence of labor unions: “Now and then,” the young revolutionaries wrote, “the workers are victorious, but only for a time. The real fruit of their battles lies, not in the immediate result, but in the ever-expanding union of the workers.”

This quote is as relevant today as ever, and it’s worth keeping in mind as striking General Motors workers decide whether to accept the tentative agreement negotiated by the United Auto Workers and GM.

What has happened on the picket line during the past month, after UAW members walked out Sept. 16?

Workers who labored under the same roof, but may not have had much personal contact, became friends. High seniority “traditional” workers, low seniority “in progression” workers and “temporary” workers with zero seniority walked the picket line together. In some locations they were joined by the lowest-paid workers in the plant — striking janitors employed under contracts with Aramark.

The strikers won the hearts and minds of exploited people across the country and beyond, with their emphasis on making “temporary” — i.e., precarious — workers permanent. The growth of precarious work has become a global crisis for the working class.

Isn’t this a living example of the “ever-expanding union of the workers”? Solidarity grows quantitatively during a strike. Eventually a qualitative change takes place. The “rugged individualism” fostered under capitalist society is replaced by class consciousness.

That is the greatest achievement during a strike — something that should be remembered by anyone assessing this tentative agreement.

Tiered pay a menace to solidarity

Tiered pay is introduced when a union and management agree to allow some workers — often future workers not yet hired when a contract is signed — to be paid less than others for doing the same work. Besides being unequal and unfair, two-tier, and now multitier,  pay scales keep a union membership divided. The impact of such a bad bargain has been disastrous, as workers at GM, Ford and Fiat Chrysler Automobiles have learned since two-tier was introduced in their contracts in 2007.

FCA workers voted down a contract in 2015 that maintained the unequal pay scales for workers hired after October 2007. They passed a revised contract that gave everyone top pay after eight years. But buried in the fine print were a number of hidden pay tiers, which were then put into effect at FCA, Ford and GM.

Under the 2015-19 contract, the number of so-called “temporary employees” grew — so-called because many of them have been working and waiting for years to acquire seniority.

Over the last four years, GM has made a record $35 billion in profits on the backs of the workers. This has fueled a desire by workers to win back what they gave up to “save the company” during the company’s 2009 bankruptcy, and earlier during less profitable years.

The current tentative agreement falls short of this goal in many areas.

What does the tentative agreement offer?

The basic union principle of “equal pay for equal work” has still not been fully restored. While the agreement reduces the length of time it takes some second-tier workers to make first-tier pay, the proposed pension plans of the tiers are still grossly unequal, as are other benefits. Certain plants still have a lower pay scale than the major plants.

Temporary workers will need three years of  “continuous service” to be made permanent in a process to begin in 2020. But if they have been laid off for over 30 days in a row during the past three years, their service is not considered “continuous.”

What about future hires? When will they make the same pay as current workers? It appears that workers hired after this proposed contract goes into effect would have to wait at least eight years to make top pay. Many, if not all, will start out as temporary employees; there is no language giving future temps a path to permanent status.

The union leaders should have insisted on the formula raised by rank-and-file activists: “Everyone tier one.” Unfortunately, multiple inequalities remain — divisive inequalities threatening the precious new strike solidarity and the “expanding union of the workers.”

In March, GM idled its Lordstown, Ohio, assembly plant. This sprawling complex employed many thousands when it opened in the 1960s. At the time it was a state-of-the-art facility that rolled cars off the lines at record speeds. Even after the steel industry abandoned the Youngstown-Warren area, Lordstown still provided good-paying union jobs to the community.

Under the tentative agreement, the plant, which one cannot miss while traveling the Ohio Turnpike, is being closed permanently, along with transmission plants in Michigan and Maryland and a parts warehouse in California. This means workers will have to relocate to far-off locations to keep their jobs.

Some dislocated former Lordstown workers demonstrated outside the meeting of GM local union leaders in downtown Detroit on Oct. 17, vowing to vote “no” to any agreement that doesn’t keep their home plant open.

There are additional past concessions this agreement fails to reverse. The cost-of-living allowance, a contract standard that was taken away during the 2009 bankruptcy, has not been restored. Once again monthly pension checks are frozen — no raise for retirees. The consolidation of classifications in skilled trades,  reducing opportunities in the highest-paying jobs, is not challenged.

On the other hand, GM’s attempts to force workers to pay thousands more in health care premiums were turned back. Unless one plows carefully through the 350-plus pages of actual language, there appears to be progress toward pay equity. Some voters might be taken in by the record $11,000 signing bonus, although it is less than half that for temps — another example of inequality.

How will workers vote? It’s hard to know. Some clearly feel that after the fight they put up, they deserve better. Others may think this is the best contract they’re going to get out of GM, which has played hardball from day one.

Rank-and-file posts on social media indicate a lot of opposition. The rank-and-file group Autoworker Caravan has developed a “contract lowlights” leaflet that outlines major problems with the agreement. A few local union leaders are calling for rejection.

Either way, there are wins that can’t be measured in dollars and cents.

“The biggest win that was made in the past 33 days of our strike was educating a whole generation on the morals and the purpose of a union,” Jessie Kelley, a striking member of Local 160, posted on Facebook Oct. 18. “They have had the opportunity to witness a group of people willing to make sacrifices to improve the standard of living in America.

“We have made a dent in society’s ‘all about me’ thinking.

“I’m so insanely proud of my UAW family.”

Grevatt, a trustee of UAW Local 869, retired from FCA after 31 years. She was a founding board member of Pride at Work and served as vice president of its Michigan chapter.