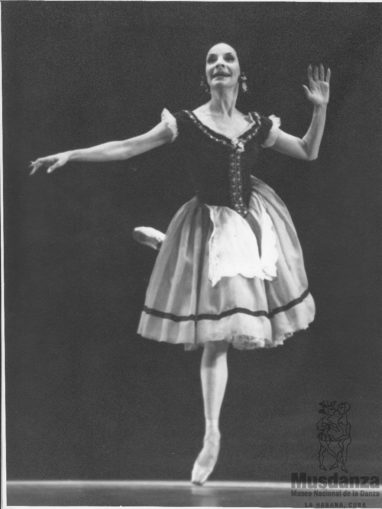 The following obituary of Alicia Alonso was written by Prensa Latina on Oct. 17 and appeared in its entirety in granma.cu.  On Alonso’s 97th birthday, Miguel Cabrera wrote on granma.cu: “Her rise to stardom knew no parallel, as she represented Cuba in 61 countries across the five continents, proving to be a dazzling figure from the early days of Broadway musical comedies to later groups with which she performed regularly, such as the American Ballet Caravan, the Ballet Theatre of New York, the Ballets Russes de Monte Carlo, and the Washington Ballet, and many others … where she appeared as a guest star.”

“Her technical strength, ‘which was 20 years ahead of the standards of the time,’ as well as her stylistic adaptability, led her to perform an amazing repertoire of 134 titles, 82 of them worldwide … the work of the most important choreographers of the romantic-classical tradition of the 19th century [as well as] of the most important figures of the 20th century, among them … George Balanchine, Agnes de Mille, Jerome Robbins, Alberto Alonso and Alberto Méndez, to mention just a few.” (Dec. 28, 2017)

Workers World Party not only mourns the loss of this giant in the ballet world, but also salutes this staunch supporter of the Cuban Revolution, who moved from the U.S. back to her homeland in 1959 after the U.S.-backed Cuban dictator, Fulgencio Batista, had been ousted from power.

Cuba’s most internationally acclaimed ballerina, Alicia Alonso passed away today at the age of 98, the National Ballet of Cuba (BNC) announced.

The legendary dancer, founder and director of the BNC also participated in the founding of the American Ballet Theatre [in 1939].

Alonso’s talent was legendary, offering technical and interpretative virtuosity in classical works, while her resolve to continue dancing, despite her progressive loss of vision, and [her] will to remain active on the stage until a very advanced age was widely admired.

The prima ballerina assoluta directed the BNC and staged shows until her death, as well as the International Ballet Festival of Havana.

“Art can contribute to understanding and dialogue between peoples as it shows some of the highest and purest coincidences among all human beings,” she once told Prensa Latina.

The Cuban ballet school founded by Alicia, Fernando and Alberto Alonso is unique in the Americas and one of the six recognized in the world.

The BNC, created by the three of them in 1948, was distinguished by the Cuban government last year as Cultural Patrimony of the Nation.

Alicia served as a model for maestro Fernando when he wrote the methodological bases of the Cuban school and starred in many of Alberto’s choreographies, the first great defender of national identity in the choreographic field.

Alonso was awarded Cuba’s National Dance Prize, Spain’s Gold Medal for Merit in Fine Arts, and the ALBA Prize for the Arts, awarded to recognized personalities of the continent.

In 2000, the Council of State of the Republic of Cuba granted Alonso the highest decoration of the island, the Jose Martí Order, and in 2015, the same body decided to add her name to Havana’s Grand Theater.

Precisely in the foyer of the Alicia Alonso Grand Theater of Havana stands a bronze statue of the artist dancing her favorite classic [role], “Giselle.”

In 2017, she was invested as a UNESCO Goodwill Ambassador. In addition, UNESCO officially created the Alicia Alonso Ibero-American Dance Institute in 2018, attached to the Rey Juan Carlos University in Madrid, Spain.

Since January 2019, she has shared the artistic direction of the BNC with one of her disciples, first dancer Viengsay Valdes. As such, the very school that Alonso founded has contributed to guaranteeing her continuity.

The legendary artist received many more awards throughout her lifetime, including the Star of the Century award from the Latin Institute of Music, for having been a true promoter of Latin cadence in classical dance.

However, no award is comparable to the mark she has left as the leading paradigm of dance in Cuba, a legacy that lies with all Cuban ballet dancers today.