On Oct. 17, the Chicago Teachers Union – 25,000 strong – struck their school district, which is the third largest in the U.S. They were joined by 7,500 education workers from Service Employees Union (SEIU) Local 73. By Oct. 21, the CTU strike had entered its third day. These education workers are advocating for their students and going on the offensive against school privatization and austerity measures. Since 2012, the CTU has prioritized rank-and-file activism, a tactic that influenced Red for Ed education actions that have rocked the U.S. and Puerto Rico since 2018. The launch of the strike is covered in this Oct. 18 article reprinted from Fightback News! (fightbacknews.org)

Chicago — Picket lines went up at hundreds of schools across Chicago at 6:30 a.m. Oct. 17. The Chicago Teachers Union (CTU) walked out for their third strike since 2012. For the more than 7,000 members of the Service Employees International Union (SEIU) Local 73 [joining them], this is an historic first strike, and the first against Chicago’s new mayor, Lori Lightfoot.

In the afternoon, the strikers went downtown in a river of red — the color of CTU — and purple — the color of SEIU. For over two hours, more than 20,000 marched back and forth, surrounding the Board of Education and City Hall buildings. They chanted, “When education is under attack, what do we do? Stand up, fight back!”

Sarah Chambers, a special education teacher at Alcott College Prep in the Roscoe Village neighborhood, helped lead picketing at her school. She is an area captain, so she then visited the other picket lines in the nearby schools. As a member of the 40-person bargaining committee for CTU, she then sat in on the bargaining, and finally joined with her co-workers at the massive rally in the Loop, Chicago’s central business district.

Talking to Fight Back!, Chambers explained, “This strike of more than 30,000 teachers, teacher assistants, clinicians, and special ed classroom assistants with CTU and SEIU is about justice for Black and brown students in the city of Chicago. They deserve all the support in their schools, [and] support to deal with the trauma they experience living in the oppressive, racist system in Chicago means full-time social workers, nurses and restorative justice coordinators.

“Lori Lightfoot has made it clear that she is choosing to support the rich people in Chicago by giving them $2.4 billion in TIF [Tax Increment Financing] money, instead of putting money into our schools.”

When asked about the outcome of this strike, Chambers didn’t pause. “We are united and strong. We know we will win.” 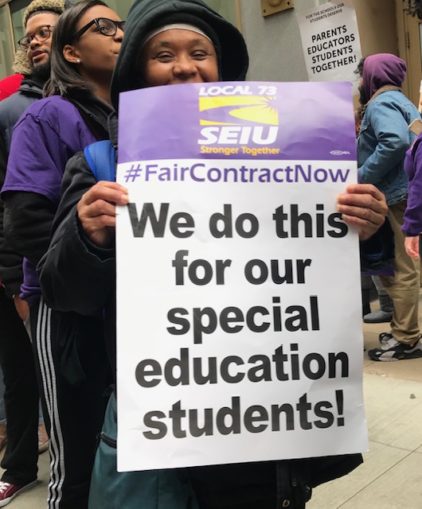