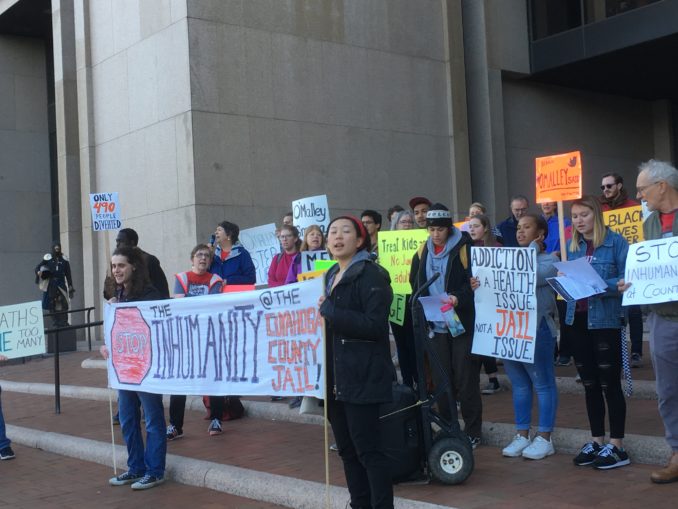 The Coalition to Stop the Inhumanity at the Cuyahoga County Jail held a march and rally in downtown Cleveland on Oct. 8 to spotlight the deplorable conditions in the local jail. After gathering outside the “Justice Center,” a building in which the jail is located, they packed the meeting of the county’s “Criminal Justice Council.” This body includes judges, prosecutors, attorneys, elected officials and others — but no one from the community who has suffered or seen their loved ones suffer inside the jail.

The coalition came together last year in response to deaths and inhumane conditions inside the jail: overcrowding; poor sanitation, food and medical care; beatings; strapping inmates into restraint chairs; and pepper spraying and  “redzoning” — that’s the practice of locking down inmates solely because understaffing makes it difficult to monitor them.

‘We want justice at the jail!’

Chants of “End money bail! We want justice at the jail!” and “No prisoners, no detainees, stop this killing industry!” rang out along the march. The coalition is demanding “bail reform” to stop the wholesale lockup of people too poor to afford bail, who are brought in for such offenses as probation violations, unpaid tickets and drug possession. Signs and chants also blasted County Executive Armond Budish, who has the power to stop the mistreatment of inmates and fire those responsible, but has so far allowed the injustices to continue.

During the council’s “public comment section,” coalition members criticized the slap on the wrist given to former Warden Eric Ivey, who received probation for obstructing an investigation into an inmate’s fatal overdose and then lying about it. They objected to the county’s decision to hire an expensive consultant to advise them on how to fix the problems, when all they have to do is listen to the community and to the prisoners.

A number of those who testified had first-hand knowledge of jail conditions. A mother described her son being deprived of basic comforts due to the jail administration’s recent decision to take away bedsheets and give inmates wool blankets to sleep on. The officials’ excuse was that sheets were being used to attempt to and to commit suicide.

However, this mother pointed out that paper sheets could be used and that patients in mental hospitals, where suicide is a concern, are allowed bedsheets. On the other hand, a man in the now-closed Cleveland city jail reportedly used a blanket to hang himself.

Since the middle of 2018, there have been nine deaths from suicide, drug overdose and medical neglect — and 55 suicide attempts in the jail. Jail guards and staff repeatedly denied inmate pleas for medical attention, including for mental health problems, and they ignored stated suicidal intentions.  Another mother of a prisoner testified before the Council that her son was verbally abused because of his mental illness.

It is no understatement to say that this situation exacerbates mental health struggles. That — and not blankets instead of bedsheets — is what desperately needs fixing.

Council members spoke after the public comment session, trying to appease the audience with claims of improvements made and more planned. These included a reduction in overcrowding and vague attempts at addressing the racially biased bail issue. If their statements are accurate, it is only because of the publicity about jail conditions and the militant activism demanding change. Much more needs to be addressed.  The movement will not go away until it is.