Over 50 demonstrators gathered in Center City on Oct. 4 to rally for an end to mass incarceration and cop corruption cover-ups under the slogan: “This Shit Ain’t New! Cop Corruption Cover-ups Continue.” The protest took place at the bitterly contested statue of Frank Rizzo, notoriously racist and fascistic former police commissioner and later mayor of Philadelphia.

Speakers called for freedom for Mumia Abu-Jamal, the remaining imprisoned MOVE 9 members, and all unjustly convicted prisoners. They were responding to the Philadelphia Fraternal Order of Police’s staged show of concern held earlier that day at FOP headquarters for “victims of crime.” The FOP highlighted Maureen Faulkner, widow of the cop whose death was used to send activist-journalist Abu-Jamal to Death Row. 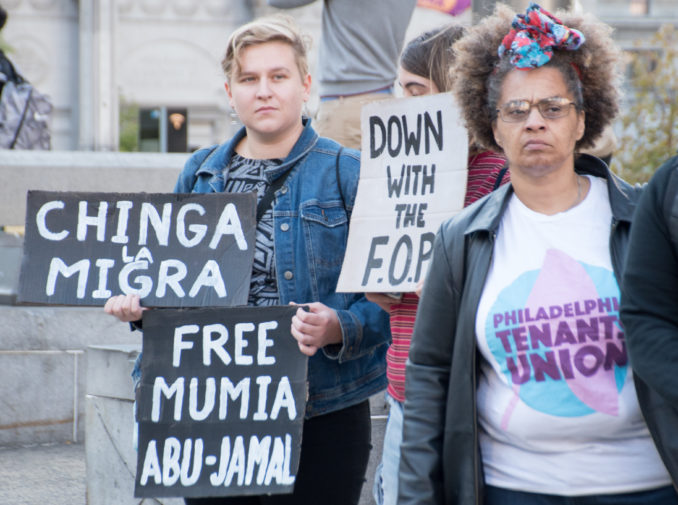 Police from the “victims” event later rallied at the office of Philadelphia District Attorney Larry Krasner, calling for his removal from participation in Abu-Jamal’s ongoing appeals process.

The counter-FOP protesters pointed out that the FOP and supporters are mobilizing against everyone who wants to end police misconduct. They emphasized that the FOP’s showcasing of Faulkner showed contempt for friends and relatives of thousands of Philly families whose loved ones have been unfairly imprisoned and murdered by cops. Many of those victims’ names were called out at the rally’s end.

On Sept. 3, Abu-Jamal’s attorneys filed new appeal briefs as well as a request, based on their finding of new evidence in DA files, to have his case sent back to the Philadelphia Common Pleas Court for a new hearing. In a Sept. 17 filing, Krasner’s office said it did not oppose this motion by Abu-Jamal.

A press release from Mobilization4Mumia, which initiated the counter-FOP protest, stated:  “Among the thousands of unfair convictions over the decades in Philadelphia is that of Mumia Abu-Jamal.  Recent court decisions and newly discovered evidence in his case have confirmed what his supporters have been arguing since 1981 — that his arrest, trial and appeals were rife with police, prosecutorial and judicial violations of the constitution.

“Police terror and over-zealous prosecution have resulted in the conviction of countless innocent people and mass incarceration.  Intimidation and manipulation of witnesses, hiding evidence, discrimination in jury selection, ineffective counsel, judicial bias — these and other unfair systemic failings in Abu-Jamal’s and other cases cause unjust imprisonment of our community members.  At the same time the courts excuse police violence.”

The peoples’ rally was chaired by Megan Malachi, from Philly for REAL Justice, who said: “Those of us who were beat down in the streets by Philadelphia cops in 2014, 2015 and 2016 created the conditions [of organizing] that put Larry Krasner into office. Our consistent demand was that we were going to bring Mumia home.”

FOP: protecting the system, not people

Ted Kelly, speaking for Workers World Party, read from Abu-Jamal’s book, “Have Black Lives Ever Mattered?” describing the police as servants of capital, of those who run this system from the bank vaults and corporate offices. Kelly addressed the function of the FOP and how it came to be established, not as a real workers’ union, but as a structure used by police to exert political power.  The FOP has a multimillion-dollar slush fund designed to buy politicians and judges.

Morgan Malachi, also with REAL Justice, stated: “Rizzo was the grandfather of racist Facebook posts. Instead of a computer, he used the media.  He had years of stacking his influence in this city. We know that the fix was in for Mumia, for the MOVE family and for every Black Philadelphian. But we know that resistance will outlive racists like Rizzo.  Resistance will bring Mumia home!”

Several speakers denounced the FOP’s intervention on behalf of cops either fired or convicted of serious crimes, only to have them returned to policing city streets.  One police commander accused of sexual harassment of at least four female cops was promoted to supervise the Special Victims Unit.

Following the rally, demonstrators took to the streets, curb-to-curb, blocking traffic as they marched around City Hall and down South Broad Street where they held a mini-rally outside the historically racist and sexist Union League. The march finally ended at 13th and Locust streets, site of the 1981 shooting for which Abu-Jamal was falsely convicted. A moment of silence was held for all victims of police brutality, including two MOVE 9 members, Merle Africa and Phil Africa, who died during incarceration.