Oct. 7 — Support for a call for a general strike in Ecuador has grown quickly in the past few days, bringing the country to the brink of a change in government. 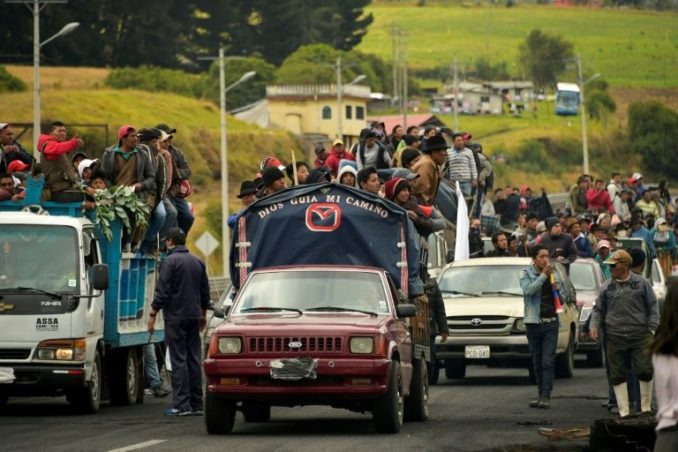 A contingent of Indigenous peoples march to Quito, with 20,000 expected to arrive Oct. 8. (Credit: Telesur)

The latest upsurge in mass struggle began after the unpopular President Lenín Moreno issued a decree on Oct. 1 ending subsidies for diesel and extra gasoline with ethanol, fuels used for nearly all vehicles. Moreno did this following the International Monetary Fund’s requirements for granting Ecuador a loan. Since Oct. 2, many thousands of citizens from all social sectors have gone out into the streets in numerous Ecuadorian cities and villages every day.

The massive mobilization taking place now far exceeds the two-day nationwide strike of truckers, bus and taxi drivers on Oct. 3-4. That strike by itself paralyzed the country in the transport unions’ unsuccessful attempt to save the more than four-decades-old subsidy.

The national government suspended school classes Oct. 3-4, which added weight to the protests. On Oct. 3, Moreno imposed a state of exception, which for the next 60 days nullified the freedoms of assembly and association (without mentioning the constitutional right of resistance). The state of exception also allowed Moreno to flee his presidential palace in Quito to the military base in Guayaquil.

The National Assembly is not in session, and people don’t know who is actually running the government. People all over the country continue to defy the president’s orders.

Resumen Latinoamericano reported Oct. 7: “47 members of the military were detained [by the people] after they used tear gas bombs to attack the inhabitants of the community of Tixan, in the canton of Clausí, in Chimborazo Province.”

The leaders of the Confederation of Indigenous Nationalities of Ecuador (CONAIE) and the United Workers Front (FUT) announced a national strike of activities on Oct. 9. It is significant that both these groups supported the president 20 months ago in his successful attempt to push through a reactionary referendum and are now breaking with him.

The strike in Ibarra and Imbabura 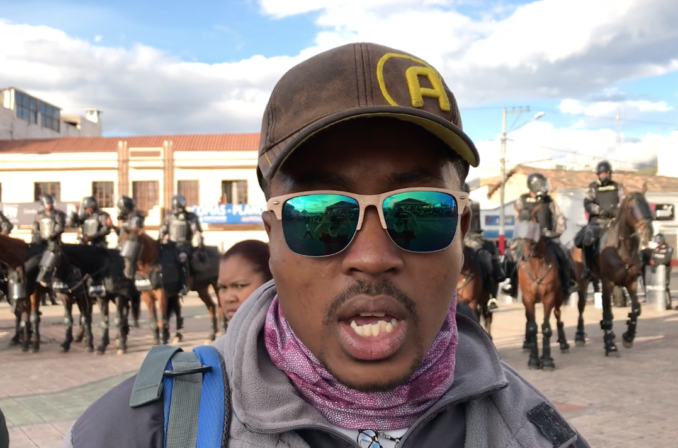 Youth leader Christian Pabon by Ibarra’s obelisk on Oct. 4 says, “We are protesting in peace and they throw the horses at us.” (WW photo: Michael Otto)

Christian Pabón, a leader of the youth wing of the Revolución Ciudadana (Citizen’s Revolution), spoke passionately at the Ibarra Obelisk on Oct. 4:

“This struggle is the response of the people to the declaration made by Lenín Moreno days ago, a declaration that goes according to specifications decreed by the IMF. We are responding because these economic measures presented by Lenín Moreno are totally diluting our rights, a historical conquest of human rights that was achieved [through struggle].

“This is really the expression of the people. We are here in a peaceful way with a passionate heart, with a fist in the air. We want the government to fall, yes. But we’ll go forward without violence. It’s hard; it’s always with the revolution. In the head and in the heart.

Pame Aguirre, elected member of the Parliament of the Andes, tweeted: “#MovilizacionNacional In Imbabura [province north of Quito, the capital], more than 10,000 people protest for their rights. The government will say that they are bums, but in reality they are fathers, mothers, students, teachers, merchants, Indigenous people, ordinary citizens beaten down by the #paquetazo” [the “special offer” from the IMF].

Workers World spoke with José Jácome, a leader of self-employed vendors who are organized into 22 associations in Ibarra’s Amazonas Market. Jácome led an Oct. 5 protest march of about 100 vendors who are part of the precarious, informal working class.

Jácome told Workers World that the increase in fuel prices “affects not only transport workers, but all of the people of Ecuador, because when the cost of fuel rises, everything goes up — the cost of food, merchandise and the cost of transportation for students.”

As of Oct. 7, WhatsApp was being used to coordinate actions in Ibarra and the province.

Today’s spontaneous uprising is inevitably compared to the mobilizations that toppled seven presidents in the turbulent years of crisis prior to the Citizens Revolution of Rafael Correa (2007-17). Nevertheless, people in the streets of Ibarra say they have never seen anything like this.

Paro Nacional’ — a national strike of the people

Aury Cotocachi reported this morning on Radio Pichincha Universal that every Indigenous community in Imbabura Province (of which Ibarra is the capital) has mobilized to join what is becoming a great national strike of the people: a true “Paro Nacional.”

It is hard to tell from Ibarra if people in all of Ecuador’s 23 provinces are in motion. The government itself acknowledges that roads are blocked in five provinces, including Tungurahua, Chimborazo and Azuay. Radio Pichincha reported this morning that a large Indigenous group is on the march in Cotopaxi Province, as police are mobilizing to prevent them from closing a major section of the Pan American highway south of Quito.

The transport strike is officially over, with public transportation returning to normal in Guayaquil and Quito, but Ibarra and other cities remain totally shut down. Classes are suspended here in Ibarra for the third day. Teachers say they are going into the streets on Oct 7.

Military police were detained by Indigenous people in Cotopaxi province and in Ibarra’s neighboring city of Otavalo. In effect, Indigenous communities have declared their own states as exceptions.

The role of Moreno

Moreno was elected in 2017 promising a continuation of the Citizens’ Revolution led by Rafael Correa. He betrayed those promises, and for the past 28 months has imposed neoliberal rulings reversing almost all the progressive gains of the prior 10 years. The pro-capitalist media endlessly promote the Big Lie that Correa’s government was corrupt and bureaucratic, wasting oil revenues and plunging Ecuador into a debt crisis. Using this false argument, Moreno went begging to the IMF to obtain billions in loans to compensate for the billions in taxes that he exempted the rich from paying.

More and more people denounce Moreno for following IMF prescriptions in imposing austerity, removing workers’ rights to a steady full-time job and his ultimate goal of privatizing the nation’s resources. The IMF is hated in Latin America for promoting poverty, unemployment and underdevelopment.

Poverty has made a comeback after a long decline during the years of Correa. Now you see elderly women begging in the streets and homeless families and couples sleeping in the parks in Ibarra. Retired people without benefits, who were receiving a monthly sum called a “bono,” have been cut off from pensions in the Indigenous communities near Ibarra. A teacher says they pay out of pocket to keep the breakfast program going for poor children.

A chant often expressed in militant protests can be translated as “Lenín Moreno, hypocrite-traitor, the people reject you in all of Ecuador.” Telesur and the international media are statistically correct in saying that less than 30 percent of the people support Moreno, but the polls say only 12 percent of the people trust him.

All the people have finally risen up — ​after two long years of smaller protests in various parts of the country have added up (the most recent in Carchi Province) — ​to demand Moreno’s ouster and the end of his reactionary regime.

The future is unknown. Differences among the people, both political and regional, have to be faced if fractured social movements are going to unite to forge a new progressive party free of the sectarianism that plagued the country even as it was making advances while Correa was president.

People here have to follow developments in Ecuador on a day-to-day basis as the Confederation of Indigenous Nationalities of Ecuador calls for a Paro Nacional (National Strike) Oct. 9, which will probably be answered by all the social sectors, despite their differences.